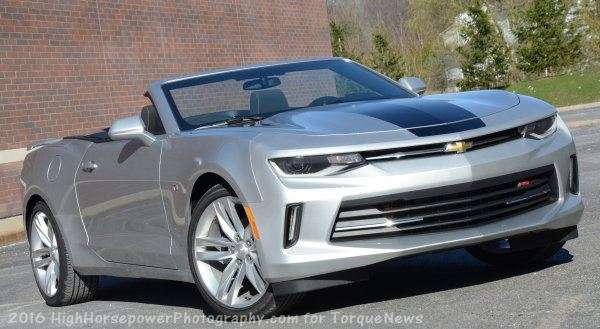 Although the Chevrolet Camaro has shown sales growth over the first few months of this year, sales of the 6th gen Camaro are slower than many expected – but why? Today, I look at a few reasons why the new Chevy muscle car isn’t selling as well as the Ford Mustang.
Advertisement

When the Chevrolet Camaro went on sale late in 2009 as a 2010 model year vehicle, it immediately began outselling the Ford Mustang and it did so with regularity for years. The Camaro led in muscle car sales in 2010, 2011, 2012, 2013 and 2014 – winning most of the monthly battles along the way - only to be upended by the new 2015 Ford Mustang last year. However, when Ford started posting big sales numbers for their next gen car back in late 2014, Chevrolet fans were quick to point out that the Mustang’s sales numbers were just due to the early rush for the new model.

When we got past the first few months of the 2015 Ford Mustang and sales not only stayed steady, but they continued to grow, those same Chevrolet fans were quick to remind us that Ford’s success was a combination of a new, fresh Mustang and a Camaro that hadn’t changed much in 5 years. They insisted that once the new Camaro arrived in late 2015, it would regain its place atop the muscle car segment sales race and honestly, I agreed with them.

I expected that when the 2016 Chevrolet Camaro went on sale late in 2015, it would cause a similar sales spike to that of the new Ford Mustang late in 2014 and through the early stages of 2015. However, we are now more than 6 months into the delivery process of the 6th generation Camaro and while sales are up over last year, the numbers are still far below those of the Mustang during its peak or even right now. The 18 month old Mustang is comfortably outselling the 6-month old Camaro and since the angle of one being fresh and new while the other is aging doesn’t apply, we have to wonder why this new Camaro hasn’t seen the big sales spike that the Mustang enjoyed.

I have driven the 2016 Camaro 1LT RS Convertible for a week and I absolutely loved it. I consider the new Camaro to be better than the 5th gen model in every way, so I really cant explain why this new model isn’t selling better than it is over the past six months. The 2010-2014 Camaro led the segment in sales and this new Camaro is, without a question, a better vehicle, so why isn’t it selling?

To get some input from a Camaro-friendly crowd, I had a friend of mine (who owns several Camaros) post a poll in a popular Camaro Facebook page. He made is an open poll, so people could either select an existing option or add their own and among the serious input, there was one dominant slight against the new Camaro – the price.

Polling a Camaro Friendly Audience
Before anyone posts asking why I chose to poll a Camaro page about Camaro sales, is that the group as a whole is more likely to offer useful comments. At a general car page, I would have gotten comments from anti-Camaro folks that wouldn’t have been based on anything more than their dislike of the entire model. Asking a Camaro owners group their thoughts allows me to get negative information from a group that is otherwise completely positive about the vehicle.

The question was simply “If you were in the market for a new car, what would stop you from buying a 6th gen Camaro?”

There were a few people who posted interesting reasons why they cannot or would not buy a 2016 Camaro right now, including one person who recently purchased a 5th gen Camaro and another who opted for a Pontiac G8. A few people jokingly suggested that they wouldn’t buy a new Camaro because 3rd gen Camaros are better while a handful stated that they were only waiting for the arrival of the new 50th Anniversary Edition to arrive.

In terms of styling, one of the poll answers was “6th gen is smaller overall, lost the muscle car feel. More of a luxurious sedan now”. While I’m not sure about calling the Camaro a sedan, there is no question that it is a little smaller and even the 1LT that I tested for a week was beautifully plush inside. The new Camaro felt just as roomy to me as the previous generation or the competition, but I understand that not everyone is going to like a new generation vehicle.

The most common reply related to the pricing of the 2016 Chevrolet Camaro, with the most popular poll choice being “Could buy 4-5 clean 4th gen Z28's for the price of base 2016”. Several other poll answers focused on the price with different wording, but in total, more than half of the people who answered the poll used the pricing as their reason for not buying a 6th gen Camaro. Also, in speaking with a handful of Camaro owners who I know in person as to why they weren’t buying a new Camaro right now, all of them showed a general disapproval of the 2016 pricing layout.

When the competition is outselling your new muscle car by a significant margin and the majority of the people in an enthusiast group point at the pricing when asked why they aren’t looking to buy right now, you have to wonder how General Motors will address this issue in an effort to improve Camaro sales. So far, it doesn’t appear that they are too worried about the sales numbers, as a recent report states that the 2017 Camaro will cost $650 more than the 2016 models.

If you have input as to why you think the new Camaro isn’t selling better, tell us in the comments below and thanks to the folks at the Camaros Unlimited Facebook page for the input!