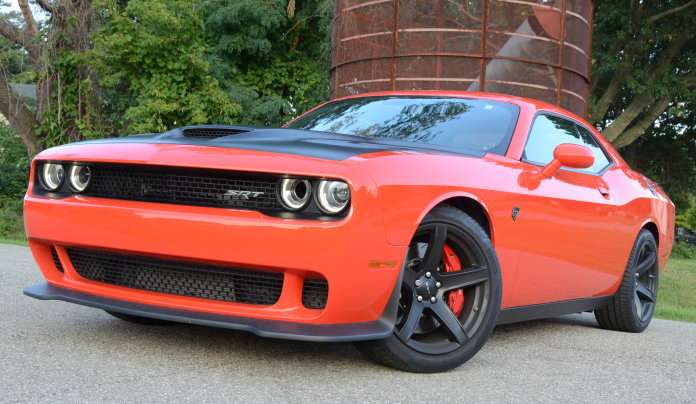 Why I Bought a 2017 Dodge Challenger SRT Hellcat

Last month, I was one of the people who bought a Dodge Challenger SRT Hellcat, helping the brawny Mopar lead the muscle car segment in August sales, and today I want to talk about why I opted for the supercharged Challenger after spending time in many of the market’s spiciest performance cars.
Advertisement

Before getting into exactly why I bought a 2017 Dodge Challenger SRT Hellcat, I should explain my young gearhead days. My dad had a built 1967 Corvette when I was little and I was raised to love all sorts of American muscle cars. When my dad took me to cars shows in years after the Corvette had been sold, he taught me all about the muscle cars which led the segment in the 1960s and 1970s – pointing out the top dogs like the GT500 Mustangs, the big block Camaros and the Hemi-powered Dodge cars.

As time went on, I found myself driving an oddball Dodge – a 1983 Dodge Mirada with a built 340 – and idolizing the monster Mopars of the original muscle car era. Like many other young Mopar fans, my dream car was a Hemi Cuda, but my 12-second Mirada secured my interest in the Mopar world as I got older.

When the time came for me to buy my first new Dodge, Dodge (and Chrysler as a whole) didn’t have a muscle car, so I opted for the quickest 2-door car in the lineup other than the Viper – the Stratus R/T. It was powered by a 3.0L Mitsubishi V6 which delivered 200 horsepower and 205lb-ft of torque, running a best quarter mile time in the high 15s. All the while, I was still driving and racing my Mirada, keeping my passion for Mopar performance cars alive when the new Challenger was introduced for the 2008 model year.

I instantly fell in love with the look of the modern Dodge Challenger and over the years, I was fortunate enough to get to drive pretty much every trimline of the modern Mopar muscle car for new car reviews, and Ive enjoyed all of them, but in April of 2014 – everything changed. For years I had dreamed of owning a classic Hemi Cuda based on the fact that it was the leading monster muscle car from the initial muscle car era, but when the Hellcat Challenger was introduced at the New York International Auto Show in 2014, I had a new dream car.

With 707 horsepower and 650lb-ft of torque, the Dodge Challenger SRT Hellcat is still the most powerful American production car (along with the Hellcat Charger) and with the ability to run the quarter mile in the low 11s with stock tires or the high 10s with drag radials, it is the quickest American production car on the drag strip. Sure, there are muscle cars which offer nearly the same straight line performance and better handling capabilities, like the Camaro ZL1, but since I was old enough to drive, drag racing has been my key area of interest. Living in the Metro Detroit area now, where almost all of the roads are straight, strong-handling cars aren’t able to exercise their advantage, so for my needs and interests, the Hellcat Challenger offers the greatest performance capabilities. I have driven lots of other high performance cars, many of which might handle better on a road course, but for my driving style, nothing is as enjoyable to me as the Hellcat Challenger.

Also, although the Hellcat Challenger wont set a Nurburgring record like the Camaro ZL1, the adjustable suspension setup offers a great many of ride quality and handling, and the massive Brembo brakes allow the 2-ton muscle car to stop in a hurry. In other words, it isn’t a record-setting road course car, but it still handles remarkably well on a road course…but where I live, the handling is never a consideration when I’m looking to go fast.

In short, I bought a 2017 Dodge Challenger SRT Hellcat because I’ve always dreamed of owning one of the greatest muscle cars and there is no question that the supercharged Hellcat Challenger is one of the greatest muscle cars of all time. It is a low-11-second car which is perfectly comfortable for daily driving and on the highway, it actually offers far better fuel economy than my 2002 Dodge Stratus R/T with 200hp. With incredible power, the loaded interior and the remarkable daily drivability – my dream car has turned out to be everything that I dreamed it would be during my first month of ownership. For more pictures and videos of my Hellcat Challenger, check out my Instagram account @patrickrall30.

Remember, we have dream cars for a reason and there will come times in your life when you get to live those dreams, so keep on dreaming of that sports car on your computer desktop wallpaper – someday that dream might come true.