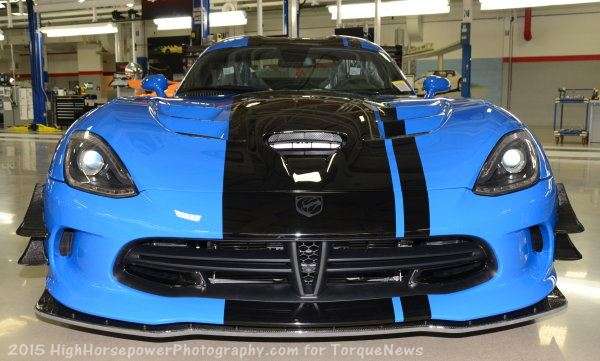 The details are short right now, but according to a recent Allpar.com report, the tentative agreement between the Chrysler Group (FCA US LLC) and the UAW includes the end of Dodge Viper production at the Connor Avenue Assembly Plant after 2017. It is unclear whether this means the end of the Dodge Viper, or the end of the Dodge Viper being built at its own exclusive facility, but it is clear that there will be some major changes for the original American supercar following the 2017 model year.

Perhaps my unbridled love for the Dodge Viper is forcing me to be optimistic, but it seems to me that the Viper doesn’t need to die – it just needs to be built in a facility with some other, higher production models. It is expensive enough to build the Viper in the painstaking process where literally everything is assembled by hand, but the fact that the Viper has its very own production facility really pushes the cost of building the beast through the roof.

The Connor Ave Plant
I had the extreme pleasure of touring the Dodge Viper’s Connor Ave plant earlier this year and it truly is remarkable, as automotive factories go. There is a large display area where the cars which have already been built wait to be shipped out. There is a big cafeteria and a gift shop and a small museum area with about a dozen of the most famous Vipers of all time. The Dodge Viper plant is the coolest plant that I have seen from the perspective of a car guy, but the problem is that all of those neat features don’t make the company any money.

When looking from an efficiency standpoint, the Connor Ave plant really isn’t very efficient. There is tons of space that is not used for production and when production space isn’t being used for some aspect of the production process, it isn’t making money in the way that it was intended. It wouldn’t be a problem if Dodge was selling thousands of Vipers a year, but at less than a thousand a year, having a plant that is exclusive to the Viper is a tough sell with the beancounters.

Of course, there is the option of moving production of another vehicle into the Connor Ave plant, but in all fairness, the facility isn’t all that big, so it would be a tight fit with the Viper – so it would have to be another very low production vehicle, similar to the Plymouth Prowler, which was also built at Connor Ave. Right now, there doesn’t seem to be a good solution to the question of adding another vehicle.

The Future of the Viper
So, with the news that production of the Dodge Viper will end at Connor Ave after 2017 has come the assumption that it will also mean the end of the Dodge Viper altogether. Sadly, that is a very real possibility, especially if the mighty Hellcat cars continue to be so popular. With only 503 examples of the Viper built and sold through the first 9 months of 2015, the Viper has fallen well below the expected sales levels and it is hard to justify the cost of a plant that only builds the Viper when they are only building 600-700 cars a year.

However, I wonder if 2017 won’t be the end of the current generation Dodge Viper, with the next generation being built in a busier plant. The Dodge Viper production is really just one line and they build 3-4 cars a day, so in the grand scheme of things, building the V10 supercar doesn’t take up very much space. Rather than retooling Connor Ave to build the next generation Viper in a plant of its own, Chrysler could add production of the next gen supercar to some other plant that has some extra space. Unfortunately, that means that the Viper will no longer be the only supercar built in the Motor City, but Im sure that other Dodge fans will learn to deal with a Viper being built elsewhere – so long as the beast still exists.

Right now, only time will tell, but those folks who have been saving up to buy a brand new Dodge Viper might want to make that purchase in the next 2 years, just to be safe.

Terry Strickland wrote on June 6, 2016 - 12:30am Permalink
Very interested in hearing the latest news on the Viper, will it stay or go. Thanks