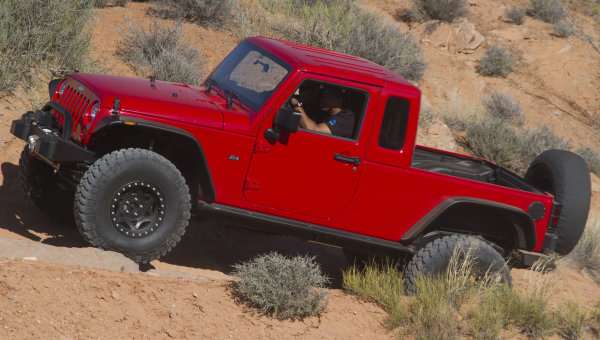 What to Expect from the 2018 Jeep Wrangler Pickup

The Chrysler Group has confirmed that there will be a Jeep Wrangler pickup coming sometime in 2017, but what should we really expect from the small Jeep truck? Today, I bring you a few thoughts on what the Wrangler pickup might look like when it finally arrives.
Advertisement

Over the past 10 years or so, there has been the constant push among Jeep enthusiasts for a new small pickup, similar to the old Comanche or Scrambler and based on the current Wrangler. The Chrysler Group has talked about it quite a bit, going so far as to offer up the JK8 pickup conversion from Mopar for folks who just had to have a Jeep with a bed.

Upon seeing the JK8 Mopar conversion kit, those people clamoring for a Jeep pickup proclaimed that the Wrangler Unlimited swap kit would make the perfect Trail Rated pickup. Now that Chrysler has confirmed that there will be a Jeep truck coming for the next generation, some people are expecting a production version of the JK8 – but is that really what we are going to get?

I don’t think so.

The Problem with the Scrambler
The Jeep Wrangler JK8 conversion essentially turns the new Wrangler Unlimited into a modern CJ8 Scrambler – hence the name. The “problem” that I see with this conversion kit becoming a production reality is that the bed swap requires owners to complete eliminate the rear seat. The new bulkhead that serves as the rear of the JK8 truck cab is positioned directly behind the front seats, so there is really only enough space behind the seats for moving the seats back when a taller driver or passenger gets in.

When you convert the current Wrangler Unlimited to the JK8 pickup, you only have so much room to work with on the chassis and that prohibits owners from having a functional bed and a back seat. I have seen Wrangler truck conversions which kept the rear doors and seats, but the cargo box was too small to really serve any purpose.

When you look at the modern state of the midsized truck world in which the Wrangler pickup would compete, there are no other 2-door, 2-seat trucks because the lack of interior space makes a truck that small impractical to most buyers. Even in the half ton truck segment, “regular cab” trucks with 2 doors and 2 or 3 seats (bench configuration) have becoming increasingly rare for the same reasons. In fact, I own a full size, half ton 2 door truck and I jokingly refer to the fact that it has about as much interior space as a Corvette. Because of that, these small cab trucks have a very narrow audience, so if the Chrysler Group goes the JK8 route with the next gen Wrangler pickup – it will be a niche vehicle, to say the least.

Look for a Wrangler Truck, not a Conversion
What I believe we will see in terms of a next generation Jeep Wrangler pickup is a truck based on the Wrangler – not a Wrangler with a truck bed replacing the back seats. I think that the Jeep pickup will share some front and rear styling with the Wrangler SUV, but I expect it to be longer overall, so that the company can include a bed similar to the one on the JK8 while preserving the rear seats – even if only a set of small temporary seats.

Basically, the Jeep pickup should look like a Wrangler in terms of styling, but look for a truck similar in size to the Chevrolet Colorado or the Toyota Tacoma. I just can’t see a true short cab pickup with no cargo area or rear seats selling well enough in this market to last, so I think that Jeep will create a Wrangler-based pickup that has a bed and seats for the kids. I also think that Jeep will keep the removable top, so this Wrangler pickup should be the only “convertible” truck in the market.

Unfortunately, the Jeep Wrangler pickup is expected later in 2017 as part of the 2018 Wrangler refresh, so it could be more than a year before we get any concrete information on this long-anticipated Trail Rated pickup.

dave wrote on February 23, 2016 - 10:13am Permalink
I think your opinion is wrong. Sure jeep will at least offer an extended cab model, maybe even a crew cab. But, if they had a regular cab long bed aka 7 foot bed like the commanche, there are people out there who would buy it. A stripped steel wheels,nothing fancy but easily modifiable. Have a few mopar options like graphics and rollbar.etc Offer it with the diesel. Big mistake if the are going to just try to please the majority of the idiots today with a 5 foot bed and call it a jeep truck.
Bill wrote on May 23, 2016 - 6:21pm Permalink
Truck must have half ton payload and atleast a 6.5 foot bed. I had an 87 comanche with the 4 litre six, great truck.
David A Mueller wrote on January 13, 2017 - 11:34am Permalink
I will buy A jeep pickup when one comes out if I like it. I would prefer to something like the 2005 gladiator .I like the old style with the spare tire mounted on the side and A extended cab.I don,t want A family pickup .Something old and new. ThankYou
Charles olvey wrote on February 19, 2017 - 4:40pm Permalink
I'm with David, I'm definitely want an extended cab, can't wait.