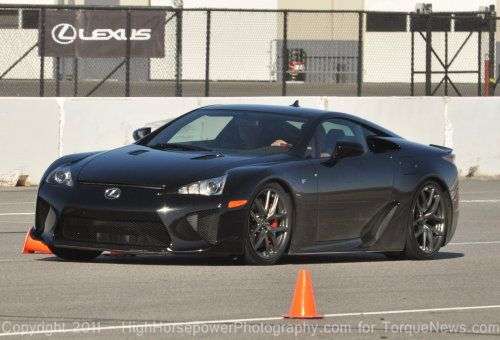 A week in the life of an auto journalist: high speed fun

Day two of my exciting week of travel began this morning at 6am when I headed downstairs to breakfast with my fellow auto writers and the people from Lexus.
Advertisement

By the way, I found that this current event is not embargoed so while I wont get into much detail, this event was to introduce the new Lexus GS350, GS350 F Sport and GS450h to the media. The weather was amazing - perfectly clear and 73 degrees - a great day for racing.

After breakfast, we all loaded into an array of limo busses and headed out to Las Vegas Motor Speedway where we were briefed on the new models and what we would be doing during the course of our day. After listening to the highlights about the new models, we headed back to the shuttles where I was taken to my first module of the day - a timed autocross session with the new Lexus GS350 with the luxury package. These models were fitted with all wheel drive and the Lexus Sport/Sport+ performance modes; and while the autocross course was fairly short it allowed us to get a great feel for just how well these roomy sedans handled themselves in a performance venue. We began by making a prep lap at low speed but after that, we were free to really unleash the new Lexus GS350 with a target time of 34.99 which was set by one of the professional drivers on hand to assist us. My first wide open lap brought about a disappointing 36.78 but I was able to improve on my second lap with a time of 35.38. That time was slower than the best times turned in by the professional drivers but I that time ranked me above many of the other writers on hand.

After the timed autocross session, I headed over to the second module where we were handed the key fob to a new Lexus GS450 Hybrid for a 15 minute drive around the track grounds that simulated a simple “average” drive. This portion was more to show off how smooth and quiet the new Lexus sedans are along with offering us a chance to experience Lexus’ hybrid drive system (which is, by the way, pretty impressive). Once we finished this portion we headed into the media center at LVMS for lunch which consisted of an amazing spread of barbecue such as beef brisket, chicken and pulled pork - all of which were very, very good. After lunch, Lexus had a surprise for us in the form of a Lexus LFA and a trained driver who took us out onto the high banks of the NASCAR track where speeds in the straights topped 150mph and even in the turns, the Japanese supercar clipped along at over 125 miles per hour.

Once I got my fill of high speed laps in the Lexus LFA, I headed to the high speed road course which offered us a chance to test the limits of the GS350, GS350 F Sport and the GS450h against competition including a new BMW 535i. This longer course including a slalom, a handful of simulated high speed lane changes and a handful of long, sweeping turns that could be taken at pretty high speeds. Fortunately for me, many members of the media at the event with me had to leave to get to their flights to the afternoon portion of the event allowed me to literally make as many road course passes as I wanted so for about an hour; I hot lapped the road course in the various cars. At one point, the gorgeous black LFA rolled into the road course area and once again, we were given a ride along with a professional driver to see how well the LFA can handle in the hands of an experienced driver. After we had run the majority of the test cars out of gas, I was given a ride back to the Mandarin Oriental hotel to wait a few hours for my ride to the airport (for my redeye flight back to the Motor City).

The rest of my day was spent sightseeing around Vegas which included bumping into baseball legend Pete Rose in Antiquities in the Caesar’s Palace shops. After chatting with Charlie Hustle for a few minutes and snapping a picture of sporting legend, I headed to Jac and Ray’s for the best Philly steak sandwich in Vegas…which unlike most of the food in Sin City wont take you broke. Finally, I jumped on a bus and headed back to the Mandarin to continue waiting for my late flight back to Detroit while resisting the urge to once again partake in the well-stocked open bar courtesy of the folks at Lexus.

As my short trip to Vegas winds down, I will head back to Detroit for about 20 hours before boarding a plane destined for the Performance Racing Industry Expo in sunny Orlando Florida…so stay tuned to TorqueNews for my next installation of a week in the life of an automotive journalist! Also, check back as we bring you all of the details from the Lexus GS350 and GS450h from Las Vegas Motor Speedway along with all of your breaking auto news!

(This is part two of my series of A week in the life of an automotive journalist..click here for part 1!)

Elon Makes a Cybertruck Statement With an Action, But Quiet in Words
Tesla's Record Month in China: Doubled Registrations in March 2021
END_OF_DOCUMENT_TOKEN_TO_BE_REPLACED