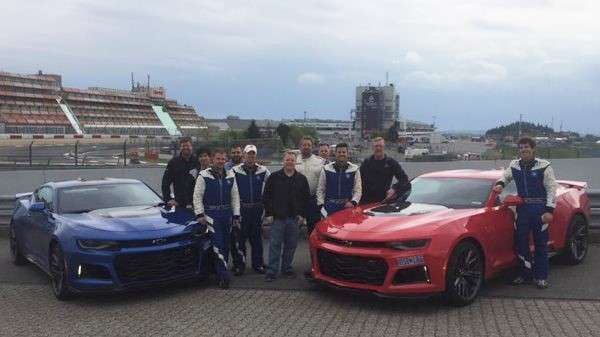 Watch the New Camaro ZL1 Blast Around the Nurburgring

Fresh video footage has hit the internet showing a pair of 2017 Chevrolet Camaro ZL1 coupes storming around the Nürburgring looking great, sounding great and – most importantly – staying off of the walls.
Advertisement

Over the past few weeks, all of the Nürburgring buzz has centered around the infamous Camaro Z28 crash video, but while the team from GM was across the pond testing what we believe to be the next Z28 – they were also pushing the 2017 Camaro ZL1 to its limits on the world’s most grueling road course.

Camaro ZL1 at the Nürburgring
GM hasn’t offered up any information on the 2017 Chevrolet Camaro ZL1 tests from the Nürburgring, but Camaro Chief Engineer Al Oppenheiser posted the image above on Facebook with the following comment:
“Without question, the best performance team in the business. The Nürburgring is the ultimate proving grounds for the world's best performance vehicles, and the Camaro ZL1 tore this place up. Can't wait until we can share why we are all smiling!!”

The Camaro boss’s comment doesn’t really tell us anything about the results of the testing, but consider this – GM took the Camaro ZL1 to the Nürburgring to test its capabilities on the world’s most difficult road course, but they surely also hoped to set a good lap record. We all know that “Ring” lap records are a big deal to automakers and in the past, GM has been quick to offer up Nürburgring Nordschleife lap records for cars like the Corvette ZR1, the Camaro Z28 and the previous Camaro ZL1 from their own test sessions.

I don’t imagine that this test session is any different and while solid testing results would put the Camaro team in a good mood – nothing would put bigger smiles on the faces of the engineering team than laying down incredible lap times on the 12+ mile track. Right now, the Nürburgring Nordschleife lap time record for an American muscle car is held by the 2014 Camaro Z28, which ran a 7:37.4 lap in the rain and the second fastest lap by a muscle car is the 2012 Camaro ZL1 with a 7:41.27.

Chevrolet currently holds the record for the fastest muscle car around the Nürburgring, but what would make a development team happier than breaking their own record on the world’s toughest race track? If I had to guess, I would expect to see a new muscle car lap record from the ZL1 – maybe with both transmissions turning in crazy-fast times.

Anyways, while Mr. Oppenheiser teased us a bit with the promise of big news on the Camaro ZL1 testing time from the Nürburgring, non-GM video has arrived online showing the pair of supercharged Camaro coupes blasting around the track. This video gives us our best chance to hear the LT4 roar from under the hood of the new ZL1, with the red car sporting the 10-speed automatic transmission and the blue car featuring the 6-speed manual transmission.

The video doesn’t really show us anything groundbreaking, but it is exciting to watch both of these Camaro ZL1 coupes in action – all while wondering what big news Al Oppenheiser might be sharing with us all in the coming weeks.

Elon Makes a Cybertruck Statement With an Action, But Quiet in Words
Tesla's Record Month in China: Doubled Registrations in March 2021
END_OF_DOCUMENT_TOKEN_TO_BE_REPLACED