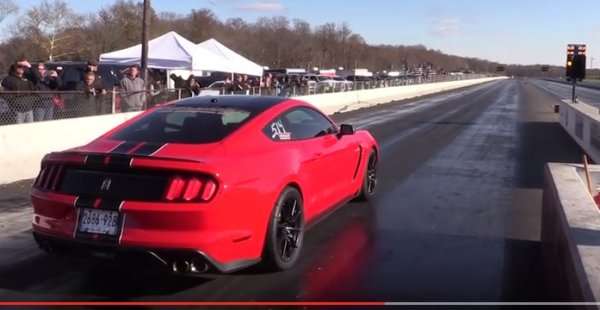 A video has surfaced on YouTube showing a new Ford Shelby GT350 Mustang making a few quarter mile runs and with the help of a set of drag radials, this road course-ready pony car blasted through the top end traps in the high 11 second range – which is pretty solid for a car engineered to be the best-handling Mustang of all time.
Advertisement

While the Ford Mustang might be one of the most common newer cars to see racing at a drag strip, the 2015/2016 Ford Shelby GT350 Mustang wasn’t designed to compete in a straight line. From top to bottom, inside and outside, the new Shelby was made to tear up tracks with lots twists and turns, and the result is the best-handling Ford Mustang of all time. However, several of the components of the GT350 will improve quarter mile times as much as they would on any other Mustang, so the owner of one bright red Shelby GT350 took it to Cecil County Dragway to see how quickly he could get his road course-ready pony car down the quarter mile.

Shelby GT350 Mustang VS the ¼ Mile
Before we get into the details, it should be noted that in the video description, we learn that this Ford Shelby GT350 Mustang is fitted with a set of Mickey Thompson drag radial tires and some unspecified suspension modifications – so it isn’t a factory stock GT350. However, it is a stock power GT350, deriving 526 horsepower from new 5.2L flat plane V8.

We get to see two runs, and on the first, the Shelby GT350 Mustang goes head to head with a wicked GT500 race car, so we can barely hear the new Shelby get away from the starting line. Based on the way that the car sounds at launch, I believe that the driver was using the launch control feature on the first run, allowing the new GT350 to get away from the line pretty nicely. We can see the GT500 in the right lane run into some troubles and let off, at which point we can hear the flat plane V8 in the GT350 roar as the car crossed the finish line, stopping the clock at the 12.04 second mark. Notice that the trap speed is 210mph – that is clearly a malfunction of the timing system.

On the second run, the Shelby GT350 Mustang is running against a slow, quiet Saab, so we are able to really hear the flat plane V8 clear its throat throughout the entire quarter mile pass. On this run, it sounds to me like the driver launches manually (without launch control) and the Mustang looks to get out a bit quicker. The GT350 really sounds freakin’ incredible as it heads down the track and in the end, this new Shelby was able to lay down a best time of 11.96 at 116 miles per hour.

This isn’t a show-stopping elapsed time, but for a Mustang built to conquer the road course – a high 11 second quarter mile time is mighty impressive.

Crank up your speakers and fall in love with the new GT350 Mustang all over again!