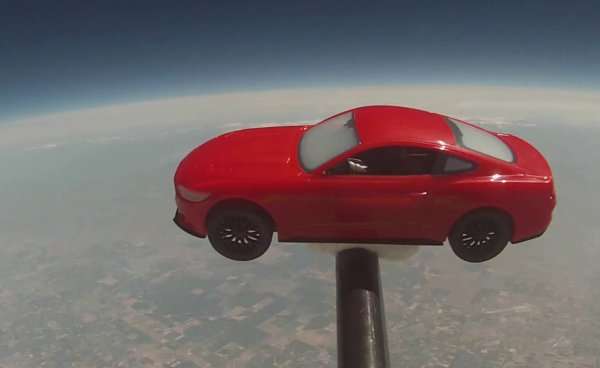 Ford Motor Company teamed up with a Ford dealership in Stockton California to send a 2015 Ford Mustang toy into space, allowing the Mustang to be the first pony car climb into the heavens while also creating a remarkably cool video of an item traveling 21 miles away high and then falling back to Earth.
Advertisement

The Ford Mustang is one of the most popular cars in the history of the American automotive industry and not only is it popular here in the US, but it is also an icon around the world. While the 2015 Ford Mustang is the first to be globally marketed, there are still Mustangs from the past 50 years in countries all around the world. Thanks to the stunt at the Empire State Building back in October 1964 and last month, the Ford Mustang is also the car that has been the furthest off of the ground so over the past five decades, the Mustang has been all over the world and it has even been to the top of what was once the tallest building in the US.

The Mustang has been to more places on Earth than any other single vehicle – but that wasn’t enough for a group backed by Big Valley Ford in Stockton California. This group wanted to make the Ford Mustang the first car to travel into space and with some help from Ford Motor Company, they made this dream a reality.

Now, actually sending a 2015 Ford Mustang into space would be a huge undertaking. It would be costly and difficult to get the 3,500lb car up into the air and then they have to worry about the dangers created by that car falling back to Earth. However, the 2015 Ford Mustang plastic models that were given to kids at the 2014 North American International Auto Show is 1/24th the size of the actual Mustang so it is much easier to get into space and much less of a concern when it falls back to Earth. That small, plastic 2015 Mustang was light enough that a single weather balloon was able to lift the toy car, along with a couple GoPro cameras as Big Valley Ford attempted to make the Mustang the first car in space.

As the video below shows, the 2015 Ford Mustang toy was strapped to a specially constructed platform with two GoPro cameras – all of which were hooked to a long line that was connected to a weather balloon. The cameras were set rolling and the balloon was set free and, as the video below shows, the Mustang quickly climbed skyward. It likely took quite some time for the balloon hauling the 2015 Mustang toy to climb into the Troposphere so the video has been time lapsed to make it easier to watch. Each time the video jumps ahead, we can see that the Mustang is further and further from the ground as the round of the Earth becomes more and more clear. About a minute and eleven seconds into the video, the weather balloon bursts with a loud noise and the toy Mustang begins to rapidly fall back to the ground. Again, the video jumps ahead as the Mustang falls, but this descent process is truly incredible to watch as the Mustang gets to spinning so fast that it is hard to make sense of what is going on in the background. Around a minute and a half into the video, it looks as though the toy changes shape a bit as the temperature of the air rapidly increases and the plastic melts.

Finally, the video ends with the crew responsible for this fun stunt finding the 2015 Ford Mustang toy laying in the grass and they are understandably excited to see that the camera is still rolling. Not only did they send the Mustang 21 miles into space – but they were able to film the entire process in high definition.

Even if you don’t care about the toy Mustang traveling into space, this video is an incredible representation of what it is like to float into space and then fall back to Earth. It is cool that the Mustang has been to space, but this video is just as interesting without the record setting automotive subject matter.

There isnt much sound to this video, but when the balloon bursts at 1:11, it makes quite the ruckus so I would recommend watching the Mustang climb into the heavens with your speakers turned up.