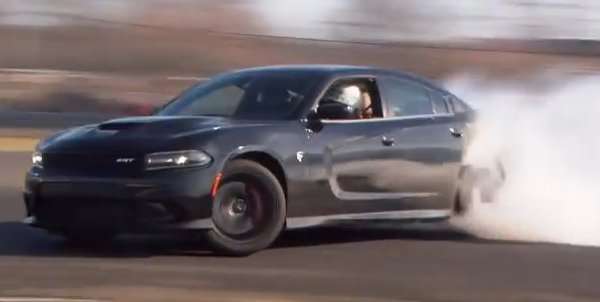 The 2015 Dodge Charger SRT Hellcat is the most powerful, the fastest and the quickest stock 4-door sedan in the world, but a new video online shows the 707 horsepower muscle sedan succeeding at yet another motorsport – drifting.
Advertisement

When the 2015 Dodge Charger SRT Hellcat was introduced to the media a few months back on a road course, showing how well the 707 horsepower sedan handled. Of course, with the 707 horsepower Hemi, the Charger also shines on the drag strip and a top speed of 204 miles per hour makes it the fastest stock sedan in the world. The Hellcat Charger gets good enough traction with the stock tires to tickle the 10-second quarter mile barrier, but with so much horsepower and torque, it only takes a few extra degrees of accelerator pedal movement to turn the rear tire surface to liquid and smoke.

The video below shows just how well the 2015 Dodge Charger SRT Hellcat smokes the tires, but instead of just sitting in one place and spinning the tires, the folks from AutoBild took the 707hp Mopar super sedan drifting. Not surprisingly, the big sedan does quite well for itself with the back end out and the rear tires roasting.

Drifting the Hellcat Charger
Now, before you begin to watch the video below, I should explain that AutoBild is a German automotive site and the video is shot all German. I do not speak any German, so I don’t have any idea what they are saying outside of the few things that I can pick up like horsepower figures or top speed numbers. However, this video isn’t about listening to what AutoBild has to say about the 2015 Charger Hellcat – this is about watching the 707hp beast showing off its drift game…and that drift game is strong.

If you are the average gearhead, you like to see and hear high performance cars in action and if that is the case, you will enjoy this video of the 2015 Charger SRT Hellcat even if you don’t understand any German. The engine revving action begins around the 1:29 mark where the Hellcat Hemi starts, revs and idles a bit before getting into another discussion segment.

The real action begins around 2:30, when the host pulls the Hellcat Charger out onto the track for a little drift practice. They get right to the good stuff, throwing the 707 horsepower sedan through each turn while keeping the back tires spinning hard. All of that power makes short work of the stock tires, allowing the driver to easily blast through the turns with the back end out and smoke pouring from the tires. After a minute of drifting action from a couple different camera views, the driver does a huge burnout before heading into the road review portion of the video.

Again, the commentary is tough to follow if you don’t understand German, but the roar of the Hellcat Hemi Charger is awesome in any language so for the newest SRT performance display – check out the video below!