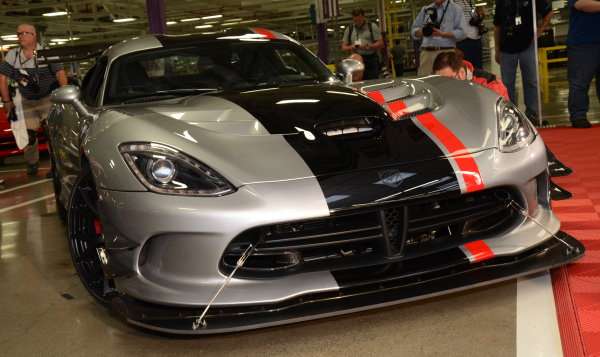 When Motor Trend tested the Dodge Viper TA2.0 at Laguna Seca Raceway in California, test driver Randy Pobst was able to lay down the best time by any sub-million dollar car with a time of 1:33.62. When the new Chevrolet Corvette Z06 came out, many believed that it would be the vehicle to knock the Viper TA2.0 off of its podium – and they were right - but it didn’t happen during Motor Trend’s first time with the Z06 at Laguna Seca.

During their “best driver’s car” testing, the Chevrolet Corvette Z06 lent by General Motors to Motor Trend ran into severe mechanical issues and as a result, the car was unable to lay down a respectable time. As you might expect, General Motors wanted to get the Z06 running right and back to the influential folks at Motor Trend and they did. The problem was that by the time GM got Motor Trend a good-running Z06, the folks at Dodge had also sent Motor Trend the new Dodge Viper ACR.

So what do you do when you have the two cars marketed as the most track capable of their lineage? You take them to the track, and that was exactly what Motor Trend did – with Laguna Seca once again serving as the battlefield for this epic war of Detroit supercars.

Viper ACR, Corvette Z06 Hit Laguna Seca
Motor Trend started by putting both of the cars through the basic tests such as 0-60 acceleration, 60-0 braking, quarter mile and the Motor Trend figure 8 and in those tests, the cars were pretty even. The Corvette was a little quick from 0-60 and in the quarter mile, but the Viper showed off some of the best braking capabilities MT has ever seen – stopping from 60mph in just 87 feet. Finally, the two cars were even in the figure 8 test when the Viper was in track mode.

While the two were very close in all of those tests, the lap around Laguna Seca was a whole different story, but before letting the Viper and Vette tear around the road course, MT made a lap with the Porsche GT3 RS. The new Porsche was impressive, breaking the Viper TA’s lap record by more than three tenths of a second. This made the GT3 RS the quickest car under a million dollars to lap Laguna Seca, but that record only lasted until the Corvette hit the track.

While Randy Pobst was critical of the Corvette Z06, he was able to run a quick time than he did with the Porsche, with the Vette running a 1:33.05 to the GT3’s 1:33.29. The C7 Corvette Z06 was officially the record holder for the quickest production car under a million dollars at Laguna Seca.

Then the Viper hit the track.

I will cut to the chase here – the Viper ACR slaughtered the Corvette Z06 lap record on the same day and in the same conditions. Pobst and the most track capable Viper ever turned in a 1:30.49, beating the Corvette’s time by nearly 3 seconds. In the world of road racing, 3 seconds is an eternity and that winning gap for the Viper comfortably secures the new American Club Racer’s place atop the podium as America’s most track capable road car.

It will be interesting to see if one of these two companies announces a Nürburgring time, as with the beating that the Viper handed the Corvette on the short Laguna Seca surface could translate into a landslide win at the Ring.

Whether you like the Viper or the Corvette, the Motor Trend video below is a great piece chock full of track videos that will make you fall even more in love with these American supercars. It is 22 minutes long, but it is worth the watch and if you refuse to watch know, at least you know that the Viper crushed the Z06 on one of America’s most famous tracks.