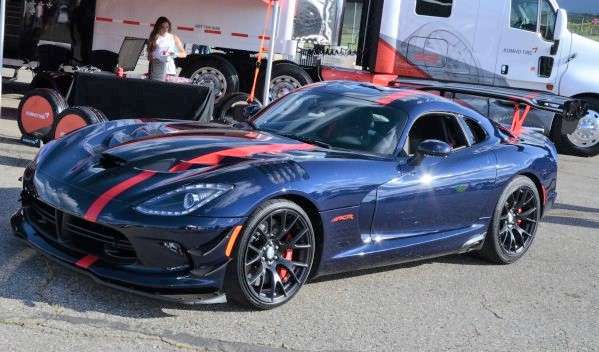 The Nürburgring battle between the new Dodge Viper ACR and the Chevrolet Corvette Z06 will almost surely take place in 2016, after the track management has had a chance to smooth out a portion of the track which will then allow them to lift the speed limit through certain sections – which could also lead to new track records.
Advertisement

Over the past decade, the two frontrunners in the battle for the quickest American cars around the famed Nürburgring have been the Chevrolet Corvette and the Dodge Viper. More specifically, the C6 Corvette ZR1 and the Viper SRT10 ACR have each posted their own claims at one point as the quickest factory production street car around the 12 mile road course. However, some new models over the past few years have jumped ahead of both the Corvette and the Viper – although both camps have a car set to reclaim the record and based on this recent news out of Germany, we should expect to see these record numbers sometime next year.

The Nürburgring Speed Limit
Earlier this year, a Nissan GTR GT3 race car got airborne through the Flugplatz portion of the Nürburgring and went off the end of the track, over a catch fence and into a crowd of people – killing one of the fans. It should be noted that the area where the fan was killed was a restricted area for this very risk, but the track is so massive that they cannot police the entire grounds for spectators who are where they shouldn’t be. Unfortunately, this fan learned why people aren’t supposed to stand in the turn immediately following the Flugplatz and as a result, he lost his life.

As a result, the Nürburgring management immediately announced a speed limit for certain vehicles that would impact a variety of racing events, but most notably, the speed limit effectively put a stop to lap record runs since any run challenging any modern record would most certainly break those speed limits.

Fortunately, the Nürburgring management team has come up with a solution which will allow them to lift the speed limit in 2016, after a large portion of the track in the Flugplatz section has been leveled to prevent cars from taking flight.

Viper VS Vette at the Ring
Right now, in the battle between the American supercars at the Nürburgring, the Dodge Viper has the advantage, with a best time of 7:12.13 by the 2010 Viper SRT10 ACR while the best time on record by a Corvette was the 7:19.63 turned in by a 2012 Corvette ZR1. Corvette boss Tadge Juechter has made comments that the C7 Corvette Z06 has turned in a new record time, but the company hasn’t announced that time. Many speculate that GM is waiting for the OK from the Nürburgring management team to announce their new Corvette record lap time, since that lap time would have to include illegal speeds. General Motors could wait until 2016 to announce their Nürburgring lap time record for the new Corvette Z06, but with the track being changed for 2016, I wonder if the company will bother to announce them at all?

Less Flugplatz, More Speed
The word Flugplatz literally translates to airfield in German according to Google and while it earned that name because this portion of the track used to be an airfield, the more modern reason for that is that most cars blasting through this area take flight. Because of that, drivers have to approach the jump area in a way that allows them to make the next turn, so cars slow down sooner than they might if that portion of the track was a flat straightaway. The removal of the lift area at the Flugplatz should allow drivers to shave at least a little time, allowing drivers to brake later for the turn following while also entering the turn more smoothly.

If the reshaping of the Flugplatz does increase speed through this area, General Motors might make a trip back to Germany with the new Z06 Corvette, or they could just be waiting to see what kind of numbers Dodge announces for the new Viper ACR. However, since the Viper was introduced so recently, the Dodge team likely hasn’t had a good chance to set a record lap and if they have to wait until 2016, it would be 5 or 6 months before we hear an official time for either vehicle.

Best of all, if the new Flugplatz area does lead to a quicker lap time, we can expect a huge flood of cars taking their shot at the new record.

Ray Card wrote on August 21, 2015 - 7:18pm Permalink
If the trend toward body styling does not change drastically for the Corvette soon, all anyone will have to do is buy an older model Viper and change the name to Corvette. Way too much resemblance to the earlier Dodge Viper !!
Michael wrote on October 29, 2015 - 3:48am Permalink
This isn't a good comparison. The ACR is a track focused car, the z06 is an all around sports car
cmc wrote on March 14, 2016 - 3:38pm Permalink
It's not the c6 z06 is a track pak model. They both are road legal and driven as such. The comparison is fine as they are both front mid engine rwd super sports cars.
Michael Nieves wrote on March 15, 2016 - 9:46am Permalink
The Viper has a wing, huge splitter, etc. The SRT or TA seem to be more in the z06 category
Glort wrote on January 11, 2016 - 2:52pm Permalink
the new viper has huge downforce and has been beating everything at the tracks including the $1million+ cars. the ring will be no different.
Derp wrote on January 8, 2017 - 10:24pm Permalink
Looks like chevy will never take the c7 z06 back to Nurburgring. Waited patiently all 2016. Didn't happen. Hopefully they don't crash the c8.