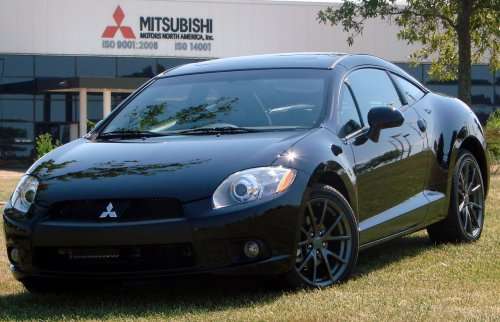 The very last Mitsubishi Eclipse to be auctioned for charity

The Mitsubishi Eclipse has enjoyed a long and (decreasingly) popular life since being introduced for the US market in 1989 but the very last Eclipse ever built has been produced and it will be auctioned off at the Mecum St. Charles Auction later this month with the proceeds going to charity.
Advertisement

The final version of this storied performance compact is a 2012 Mitsubishi Eclipse in the new SE (special edition) trimline but unlike the normal production Eclipse SE which comes only with the 4-cylinder mill, the car headed to Mecum St. Charles is an SE powered by the MiVEC 3.8L V8 mated to the 4-speed Sportronic automatic transmission. This sends 268 horsepower to the unique argent black 18” alloy wheels of the SE package that match nicely with the Kalapana Black scheme. The last Eclipse built is packed full of options (in addition to the engine that is otherwise not available with the SE package) including the SE lower side graphics, sunroof, leather interior, 650w Rockford Fosgate 9-speaker audio system with Sirius/XM satellite radio, hands-free Bluetooth phone interface, rearview camera and HID headlights.

The Mitsubishi Eclipse has come a long way from the “turbo all wheel drive DSM” of the 1990s that helped make the Eclipse name a heavy hitter in the performance segment with the 2011 Eclipse using a naturally aspirated V6 and front wheel drive for the high end models rather than the turbocharged 4-cylinder and AWD packages of the glory days of the Japanese sport compact car. Also, as the Eclipse has gotten more power it has also gotten heavier and more expensive – running off the bargain racers who originally sought after the diminutive eclipses built from 1989 to 1999. Even though the 4th and final generation of the Mitsubishi Eclipse offered an impressive 268 horsepower from the MiVEC V6, the heavier car and lack of AWD puts these higher performance Japanese compacts at a disadvantage to those old school models from the 90s that helped to set the standard for the sport compact market in the US. Even though the Eclipse has sold nearly 1 million copies in the last 22 years, the steady decline in sales due to rising prices and decreasing performance capabilities essentially killed the Eclipse. For comparison, the 268 horsepower Eclipse GT comes with a price tag starting just over $30,000 – over $1,000 more than the 2012 Ford Mustang GT which packs 412 horsepower and far greater performance measures. The Eclipse of the 1990s offered comparable performance to the American performance cars (Mustang, Camaro) of the 1990s but as those cars evolved, the Eclipse simply got old and fat.

When the last 2012 Mitsubishi Eclipse ever built rolls across the auction block at the 2011 Mecum St. Charles event it will offer collectors a rare chance to own the end of an era – but will the Mecum crowd respond positively to this piece of Mitsubishi history? I have had the pleasure of attending several Mecum auctions and if you are ever near one (especially the Indy auction) it is 100% worth the low admission fee. Mecum auctions are like car shows with the nicest vehicles imaginable but they are all for sale. It seems like the perfect fit for a vehicle that effectively ends the line for an automotive legend like the Eclipse but with the Mecum crowd leaning strongly towards American muscle, it will be interesting to see how much money the last Eclipse demands.

Tsingshan's Threat to Tesla: EV Maker Is In Battery Crosshairs
Tesla-Funded Research Reveals One of The Biggest Mysteries of EV Battery
END_OF_DOCUMENT_TOKEN_TO_BE_REPLACED