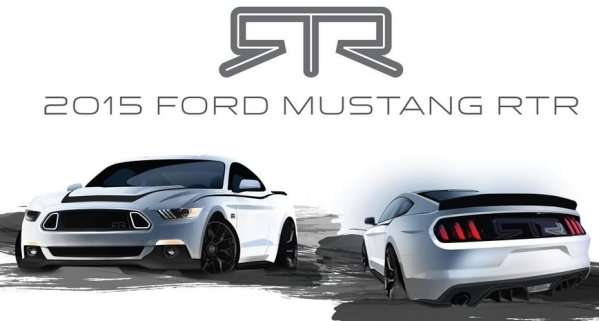 Formula Drift Champion and hardcore Mustang lover Vaughn Gittin Jr introduced his own line of customized, high performance Mustangs with the current generation, but with the arrival of the 2015 Ford Mustang – Gittin and his team have big plans for the next generation RTR Mustang.
Advertisement

Over the past few years, Vaughn Gittin Jr and his team have offered their unique Ford Mustang RTR package with interior, exterior and performance enhancements that make these high performance pony cars stand out in even the biggest crowd of Mustangs. The “Ready To Rock” Mustangs from the past two model years (2013-2014) were offered in Stage 1 and Stage 2 – with Stage 1 focusing more on appearance inside and out while Stage 2 takes a more aggressive approach in enhancing the performance of the Ford Mustang.

With the popularity of Vaughn Gittin Jr on the rise and the massive amount of interest in the 2015 Ford Mustang, it should come as no surprise that the drift champ and his team intend to roll out an RTR package for 2015 and today, we have our first teaser of the next generation RTR Mustang.

“Ford’s Mustang team has done an incredible job with the new 2015 Ford Mustang,” says Vaughn. “The RTR team and I are pumped to work with such an incredible platform for RTR builds. Without a question, the performance and overall presence of the new Mustang RTR will impress and keep a smile on our customers’ faces whether cruising the streets or getting crazy on the track. I cannot take delivery of mine soon enough!”

First off, as we can see in the renderings shown here, the 2015 Ford Mustang RTR will wear a unique chin spoiler, a unique grille design with the RTR logo, a new hood with a taller center section, RTR wheels, unique side sills, a new and vastly more aggressive rear diffuser, a large duckbill style rear spoiler and a taillight panel sporting the RTR logo. While these components are obviously new for the 2015 Mustang, the basic design cues appear to be very similar to the current 2014 Mustang RTR packages.

The 2015 Ford Mustang RTR will be offered with either Stage 1 or Stage 2 and I would expect that both of them will look like the car shown here – with specific performance applications for each. Expect Stage 1 to include simple mods like high performance tires wrapped around the RTR rims, a Ford Racing suspension package that should bring the body about an inch closer to Earth, an RTR exhaust system and possibly a cold air intake package. Provided that Stage 2 for the 2015 RTR Mustang follows the pattern of the current models, expect to see a Ford Racing tune, an adjustable suspension package, adjustable front and rear sway bars, an adjustable panhard bar, a rear chassis support and a big brake package.

The 2014 RTR Mustang was available with either the base V6 or the high performance V8, but for the 2015 model year, Gittin’s team will use the 4-cylinder EcoBoost and the 5.0L V8. This means that the 2015 RTR Mustang will offer at least 310 horsepower with the turbo-4 while the 5.0L V8 will pack at least 435 horsepower.

The 2015 Ford Mustang RTR is expected to arrive within the first half of 2015 and as we get neared the dealership launch – expect more information on this awesome next generation customized pony car.