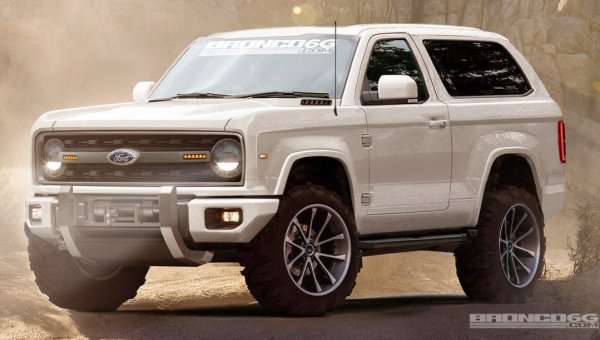 A Ford UAW boss recently stated that the Ford Bronco will return to the lineup and it will be built in the same Michigan production facility as the upcoming Ford Ranger, but when the Bronco does return, we shouldn’t expect it to look like the F150-based renderings floating around the internet for the past few years.
Advertisement

It seems as though Ford fans have been talking about the future Ford Bronco since the last real Bronco left the company lineup back in 1996. Ford stoked the fire under Bronco fans a bit back in 2004 when they revealed a small, diesel-powered Bronco Concept, but that model never materialized into anything more than eye candy. Ten years later, an off-road magazine did an April Fool’s Day piece detailing a new Bronco, but that was nothing more than a joke – one which fooled a great many people. Finally, the folks at Bronco6g.com cooked up the cool rendering above, but other than concepts, media spoofs and fan renderings, there hasn’t been any real information on a future Ford Bronco until now.

While speaking recently with the Detroit Free Press, Bill Johnson, plant chairman for UAW Local 900 (which includes the Wayne Assembly Plant in Metro Detroit) made the following comment:
“We hate to see the products go to Mexico, but with the Ranger and the Bronco coming to Michigan Assembly that absolutely secures the future for our people a lot more than the Focus does.”

While Bill Johnson was really just pointing out that the workers he represents will have a job once the Ford Focus production moves to Mexico, he also provided what seems to be the most official proof that the Ford Bronco is returning. The only downside to this is that when this Bronco returns to the Ford lineup, it almost certainly won’t be like the many renderings floating around the internet.

No F150-Based Bronco
If you look at the renderings online showing what the various artists hoped to see in a “new” Ford Bronco, there is one constant among the most popular images – they are all larger, F150-based vehicles like the old version. The Ford Bronco which was offered from 1966 through 1996 was a full size truck-based, body-on-frame vehicle and the renderings either draw heavy inspiration from the final generation of the old Bronco (think OJ’s Bronco) or they are based on the new F150. However, this new Bronco will most likely be a smaller unibody vehicle which will share very few attributes with the F Series pickups – including the engines.

How do I know this? Well, I don’t, but I understand how production processes work in the auto industry and I know that vehicles are almost always produced in plants with other vehicles which share common components. If the new Ford Bronco was going to be a body-on-frame vehicle like the old Bronco or any of the F150 pickups, it would almost certainly be built in either one of the two F150 plants (Detroit or Kansas City), or it would be built with the body-on-frame SUVs in Kentucky.

Instead, it is being built alongside the new Ford Ranger in Michigan, meaning that it will more than likely share the unibody underpinnings from the Ranger. With that in mind, the Bronco will likely be smaller many fans had hoped, but that doesn’t mean that the new Bronco won’t be a great SUV for those folks who want a vehicle that is more capable than, say, the Ford Edge or Explorer.

What to Expect from the Bronco
So, with the next Ford Bronco sharing a production facility with the Ranger, we can expect that the new SUV will have a unibody construction with a lineup of smaller engines. It will likely feature a spread of 4-cylinder engines including some EcoBoost options and if we are really lucky, we might see one of the EcoBoost V6 engines sneak into a performance model. However, I would be blown away to see a production unibody Ford Bronco with a V8 engine.

However, we can expect that the next Ford Bronco, even when based on the unibody Ford Ranger pickup, will offer vastly more off-roading abilities than any of the current Ford SUVs. Sure, you can take the Explorer or Edge offroading, but those low-riding vehicles are made more for daily driving, with the occasional rough road thrown into the mix. The Bronco should have the position attributes of the Ranger, so it should be a little higher riding, with more ground clearance and a better approach angle than the other Ford SUVs.

Finally, one of the most common discussions is the number of doors on the future Bronco. All of the renderings have shown a 2-door model, similar to the old Bronco, but right now, the only SUV sold by an American automaker with only two side doors (not counting the rear hatch) is the Jeep Wrangler. The expectation is that the new Bronco will be designed to compete with the Wrangler, but many people expect that Ford will target the 4-door Jeep Wrangler Unlimited, which would give the Bronco far more interior space for passengers and cargo.

So, while we know now that there is a new Ford Bronco on the way, we don’t know when it will arrive and when it does, I don’t expect that it will be the reincarnation of the truck-based 1996 Bronco. Think of it more as a reincarnation of the Bronco II, which could be the first real competitor to the Jeep Wrangler in many moons.

Bret wrote on October 8, 2016 - 12:15am Permalink
The bronco should be a body on frame. If it isn't, it won't be highly modifiable like the old broncos or the current jeep. The bronco is an enthusiast vehicle and if it is similar to early broncos you will see lift kits and all kinds of aftermarket accessories pop up. A raptor like version of a bronco would sell very well.