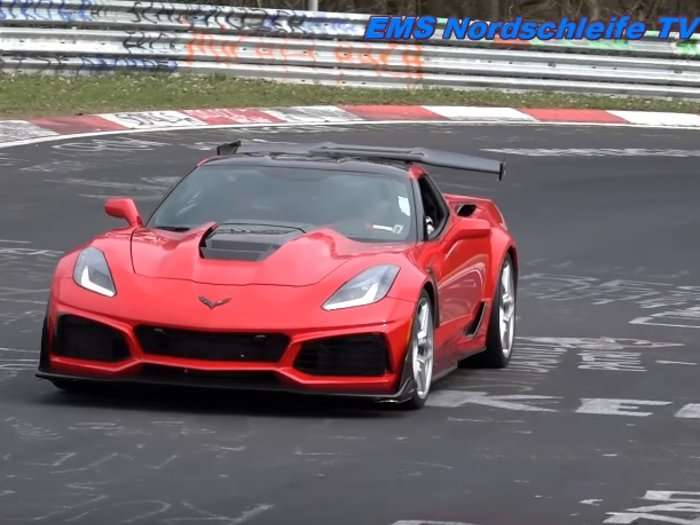 Undisguised Corvette ZR1 Caught Working Out at the Nurburgring

New video footage showing the 2019 Chevrolet Corvette ZR1 storming around the Nurburgring leads me to believe that GM is in Germany with their 755-horsepower supercar, likely shooting for the 6-minute range – possibly making this C7 the fastest American machine to lap the Nordschleife.
Advertisement

Well before the 2019 Chevrolet Corvette ZR1 was introduced with details, video footage revealed what we thought was the C7 ZR1 storming around the Nurburgring in Germany. It turns out that we were all right – that mysterious Corvette with the big wing was the C7 ZR1 and now we know that it packs 755 horsepower and an elaborate aerodynamics package.

This week, new video footage of a red 2019 Corvette ZR1 on the Nurburgring arrived online via the EMS Nordschleife TV YouTube channel. This time, there is no camouflage, but the car does have the required exhaust silencers and while last year the cars were likely testing – this car might be making a run at the Nordschleife production car record.

Chevy at the Nurburgring
Right now, the quickest Nordschleife lap time by a Chevrolet vehicle was a current Corvette Z06 being tested by Sport Auto magazine. That car turned in a lap time of 7:13.9, but the quickest lap time turned in by a car being campaigned by General Motors was the current Camaro ZL1 1LE with a time of 7:16.04.

Finally, the quickest Gm-campaigned Corvette on the list of the best-performing cars on the Nurburgring Nordschleife was the C6 Corvette ZR1 with a lap time of 7:19.63.

Of course, Chevrolet is likely looking to set their own record at the Nurburgring and based on the time turned in by Sport Auto in the 650-horsepower Z06, the 755-horsepower ZR1 should most certainly be able to run well into the low 7-minute range, if not in the 6-minute range. The combination of the extra power with the improved aerodynamics package will definitely make this Corvette the quickest Chevrolet lap time, but how low the number is will determine where the new ZR1 ranks against the rest of the world.

The Production Records
Right now, the quickest Nurburging Nordschleife lap time for a production, road-going car was a 6:47.25, laid down by the current Porsche 911 GT2 RS. The quickest lap time by an American car was turned in last year by the 2017 Dodge Viper ACR, with a time of 7:01.3 and the best time by a from somewhere other than Europe or the USA was a 7:08.679, turned in by the 2015 Nissan GTR NISMO.

The odds are good that the 6-minute range is the ultimate goal for the new Corvette ZR1 and if the LT5-powered supercar can run anything starting with a 6, it will have beaten everything from the US and Japan, but that overall number is going to take some work.

Based on the Sport Auto numbers for the C7 Z06, the new ZR1 would need to improve by 27 seconds (give or take) to take the overall Nordschleife record. That is a tall order, but it seems feasible.

In the meantime, check out the video below of the ZR1 testing at “The Ring”.