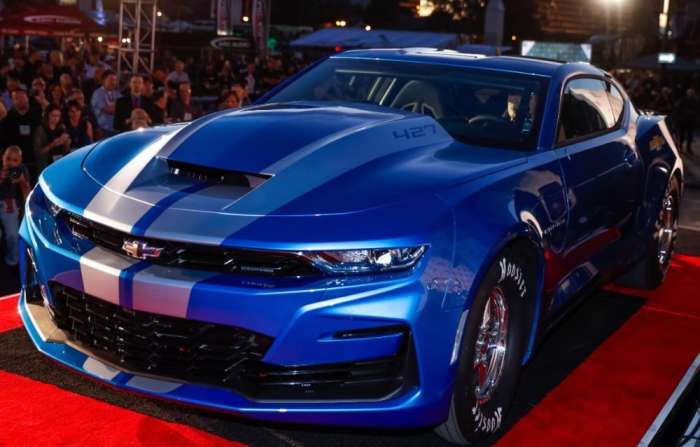 The biggest surprise from Chevrolet at the SEMA Show thus far is the introduction of two new COPO Camaro drag cars – one being the 2019 production car and the other being an all-electric, 9-second concept.
Advertisement

Chevrolet generally uses the SEMA Show in Las Vegas to introduce the newest COPO Camaro drag car and at the 2018 show, we get to meet the 2019 production version of the track-only machine. We could have predicted the introduction of the 2019 COPO Camaro that will be sold to a limited number of racers around the country, but what we couldn’t have predicted is the eCOPO – an all-electric version of the factory-built race car.

“Chevrolet is proud to celebrate 50 years of the COPO Camaro legacy,” said Jim Campbell, GM U.S. vice president of Performance Vehicles and Motorsports. “It’s one of the most enduring legacies in drag racing, with a powerful past and fast future.”

2019 COPO
First up, we have the 2019 COPO Camaro production drag car. As has been the case throughout the entire run of the modern COPO racing program, only 69 examples will be built as a nod to the original 1969 COPO Camaro. These cars are sold with a serial number, not a VIN, so they cannot be registered for road use, but if you want to go racing in the NHRA Factory Stock class, this Chevy is one of the three options on today’s market – competing with the Ford Mustang Cobra Jet and the Dodge Challenger Drag Pak.

The 2019 COPO Camaro is available with three different engines. The standard engine is a naturally aspirated 427-cubic inch LSX that comes as part of the COPO 50th Anniversary package. Next, there is a naturally aspirated 302-cubic inch LT-based engine and the most powerful option is the supercharged LSX measuring 350 cubic inches. The 2019 supercharged engine gets a revised 2.65-liter Magnuson blower, while all three engines come with a race-ready automatic transmission.

Of course, the 2019 COPO Camaro also comes with the safety and suspension items needed to legally participate in the NHRA stock classes, so while prices are likely to be in the range of $100,000, this is a great turnkey option for serious drag racers.

As mentioned above, there is a 50th Anniversary Appearance Package that can be ordered with those 2019 COPO Camaro drag cars equipped with the 427 engine, including an orange engine block, chrome valve covers, a black high-rise intake manifold unique graphics and the Laguna Blue hue from the 1969 COPO cars.

The eCOPO
The big surprise at SEMA from Chevy was the introduction of the eCOPO Concept – an all-electric version of the drag racing package. GM worked with electric racing team Hancock and Lane Racing to develop the electric motor setup, which features a pair of BorgWarner HVH 250-150 motor assemblies, each of which generates around 300 lb-ft of torque and more than 700 horsepower. That electric power is sent to the rear wheels by means of a traditional automatic transmission, so other than the electric motor replacing the gas-powered engine, the eCOPO is based on the production race car.

“The eCOPO Concept is all about where we go in the future with electrification in the high performance space,” said Russ O’Blenes, director, Performance Variants, Parts and Motorsports at General Motors. “The original COPO Camaro program was all about pushing the envelope, and this concept is an exploration with the very same spirit.”

The eCOPO Camaro is capable of 9-second quarter mile times and thanks to the size of the 800-volt battery pack recharges considerably faster than production EV systems. It is purely a concept right now, but Hancock and Lane Racing will continue to work with this car as Chevrolet eyes the feature of drag racing.

DeanMcManis wrote on November 1, 2018 - 4:58pm Permalink
I think that Tesla's impressive showings on YouTube, with their EVs repeatedly beating serious race cars and exotic cars at the drag strip, inspired someone at Chevy to put this EV drag racer together. With the stripped down and drag focused COPO Camaro shell/chassis, combined with a torque-rich electric motor, this EV COPO Camaro should be knocking on (down?) the Demon's door. For me, the most exciting news about the EV COPO Camaro is that GM is considering putting the EV package together as a crate engine system for other cars and trucks. My friend just bought GM's E-Rod crate V8 engine/transmission as an upgrade for his older Corvette, and it would be amazing if they could put together an EV crate engine package. I can already think of a couple of my older cars that would benefit from an engine swap that would convert them into performance EVs.