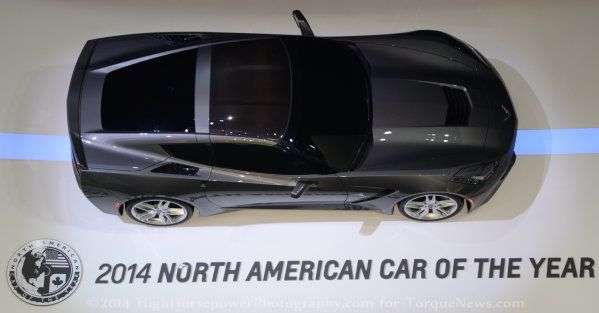 Top Gear host Jeremy Clarkson is quick to speak ill of cars that he doesn’t like but when the Brit recently climbed into the new C7 Chevrolet Corvette Stingray, the outcome was quite a surprise – as the globally infamous, outspoken automotive personality loved the new Corvette.
Advertisement

Jeremy Clarkson is, without a doubt, one of the most openly opinionated individuals in the automotive world so when he took the keys to the new Chevrolet Corvette Stingray Convertible, you can bet that he is going to be brutally honest with his reviews. Historically, Clarkson doesn’t like American cars…or American people…or Polish people or Mexican people or really, anyone or anything that was created outside of Great Britain. He is the kind of journalist who refers to a car as being American as an insult and while there are American cars that Clarkson has enjoyed, he is notoriously harsh in his reviews of American vehicles. He says what he thinks – no matter who it bothers and when he hates something…he is going to make sure that everyone knows it.

However, when Clarkson published a review recently of the 2014 Chevrolet Corvette Stingray Convertible and incredible thing happened. He loved the new Corvette.

Clarkson Praises the C7 Stingray
Jeremy Clarkson’s review of the 2014 Chevrolet Corvette Stingray Convertible was filled with the expected level of humorous rhetoric – some of which will offend some Americans who love the hate Clarkson – but any Corvette fan who can look past all of the redneck jokes will find a glowing review.

In terms of the exterior of the new Corvette Stingray drop-top, Clarkson referred to it as a “masterpiece”. He did call the design childish, but he compared it to the Lamborghini Aventador, the Ferrari 458 and the Jaguar F-Type that are also childish…and he complimented the Corvette by saying that from some angles, the Stingray is the better looking of those four sports cars. After that, he compared aspects of the C7 to various Ferrari, Bentley and BMW models while speaking very highly of the interior comforts, the high tech features and the real world performance.

Clarkson also said in his review of the 2014 Corvette that he “absolutely loved it”, calling it the “bargain of the century” and giving it four stars out of a possible five.

The Corvette Can Take on the World
The Chevrolet Corvette has always been a respected performance car on a global scale, but past Corvettes would have struggled to compete with some of the European models that Clarkson loves so much. However, General Motors worked hard to make the C7 Stingray a true sports car in every way and the fact that Jeremy Clarkson had such good things to say is proof positive that the Corvette is deserving of all of the positive press that it has received. This is proof that the Corvette Stingray really is that good – and that Clarkson doesn’t hate EVERY American car.

The fact that Jeremy Clarkson doesn’t verify that the new Chevrolet Corvette Stingray is perfect…but it verifies that it is among the best sports cars in the world when the man who is arguably the most critical critic out there loves a car – you know that it has to be pretty good.

Whether you love or hate Jeremy Clarkson, his review of the new Corvette Stingray is one of the best that I have read and you can have a look at it yourself by clicking here. I will warn you now…if you cannot laugh at some American stereotypes or the fact that he doesn’t know the President of the United States’ name, you will probably be more annoyed by this than amused – but I found this to be a great review of the modern Stingray.

Drew wrote on January 10, 2015 - 7:29pm Permalink
If you want to buy a Corvette in GB or Japan, then the steering wheel IS on the wrong side of the car. Porsche, Ferrari, Nissan and nearly everyone sell their cars with wheels on either side, so not offering a right-drive car is a strike against it for English consumers, and it surely hurts sales (if not GM profits for such low-volume products). Clarkson has been willing to compromise in the past when owning American sports cars, but it's a valid criticism nonetheless. If you buy, say, a Jaguar F-type, you can get the steering wheel to suit the roads wherever you live. Otherwise, US consumers would turn away. These island nations will change their traditions no sooner than Americans will adopt the metric system.