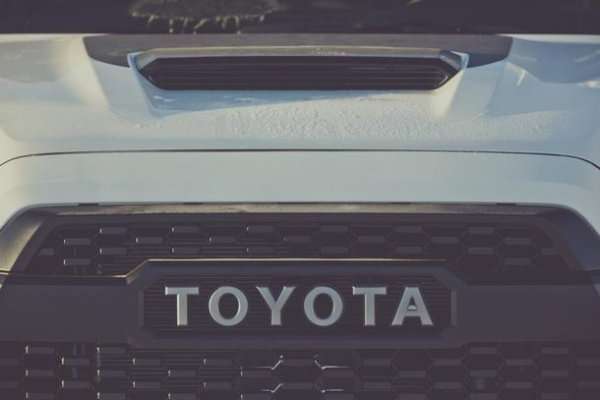 This morning, Toyota rolled out the image above showing the grille and hood scoop of a mystery vehicle that will debut later this week in Chicago – one which I am guessing will have ties to the Toyota Racing Development division.
Advertisement

When automakers issue tease images, they generally include some sort of information on the vehicle being teased, but in the case of this Toyota Chicago teaser, there is absolutely no information. The only text accompanying the image read as follows:
“It’s not quite grilling season, but Toyota is heating up the Windy City with a world premiere Thursday, Feb. 11.”

That’s it. Just a picture of a Toyota grille, a hood scoop and that cryptic comment that really doesn’t tell us anything about the vehicle in question.

Fortunately, anyone who is familiar with the current Toyota truck lineup will be quick to point out that this is a similar grille to that of the TRD (Toyota Racing Development) Pro variants of the Tundra and 4Runner, while the hood scoop also looks similar to the piece on the TRD 4Runner. In short, this is likely a new TRD vehicle, but what is it?

The Mystery TRD
The image above shows what I believe to be a new TRD grille and hood scoop combination coming to one of the Toyota trucks or SUVs. As mentioned above, the Tundra and 4Runner are both current offered in TRD Pro form, while the new Tacoma is offered in TRD Sport and TRD Off-Road. It seems unlikely that Toyota would try to create a rugged TRD package for one of their other SUVs and they don’t have any other trucks, so I wonder if this grille and hood are revealing a new look for the current TRD Tacoma options.

While the Tacoma has two different TRD packages, it doesn’t get the unique grille that we see on the TRD Pro Tundra and 4Runner. They each get a different grille design than the rest of the Tacoma lineup, but neither the Sport nor the Off-Road packages get the same bold grille design as the Tundra or 4Runner. The Tacoma TRD Sport does have a small hood scoop, so perhaps what we are seeing is a facelift for the Tacoma TRD Sport, with the proper TRD grille and a more prominent hood scoop – or this new look could be applied to both of the current TRD Tacomas.

In any case, the modern TRD packages for the Tundra and Tacoma create what I believe to be the best “foreign” half ton truck and the best mid-sized truck on the market. Whether this teaser hints to yet another TRD package for a different vehicle or if it is simply an exterior refresh for the current TRD Tacoma – we can be sure that the vehicle behind this grille and hood scoop will be a blast to drive on and off-road.

Unfortunately, we will have to wait until Thursday to find out just what Toyota and TRD have in store for the world.

Ben H wrote on February 9, 2016 - 2:44pm Permalink
It's most likely the FRS coming to Toyota (as they just dropped the Scion Brand) and TRD put some goodies in to give it more of a supercar feel.