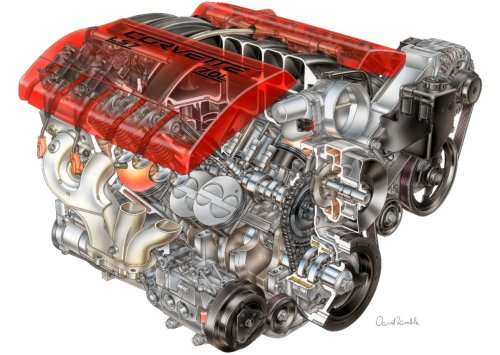 A little over a week ago, we talked about the General Motors VIN decoder sheet which indicated that the 2014 Chevrolet Camaro could be packing the LS7 V8 from the Corvette Z06 and while GM isnt offering any comments on this possible new Camaro engine option – we reached out to Mr. Ken Lingenfelter for his input on what GM could have in store for the 2014 Camaro.
Advertisement

If you are somehow unfamiliar with Ken Lingenfelter, he is the man in charge at Lingenfelter Performance Equipment (LPE). LPE is one of the premier GM high performance component and tuning companies in the world and LPE-modified Camaros, Corvettes and Cadillac V-Series models are among the quickest and fastest American performance cars in the world. On top of that, Ken Lingenfelter is the owner of one of the most elaborate collections of high performance vehicles in the United States with over 200 cars that include a wide variety of very powerful General Motors products and over 20 Camaros from across the generations. Click here for a look at Mr. Lingenfelter’s vehicle collection list.

I figured that if we cannot get any official information on the possibilities of an LS7-powered 2014 Chevrolet Camaro, someone like Ken Lingenfelter who has a major personal and professional interest in the Camaro (and the entire GM performance lineup) would be a great person to ask ‘what could be’ with the combination of the Camaro and the LS7 engine from the current Corvette Z06. Fortunately, Mr. Lingenfelter had the time to put together an answer to my question that both confirms what many Camaro enthusiasts had hoped while also offering some more vital information that may indicate that a factory-built LS7-powered Camaro may not be hitting dealerships anytime soon.

Recently there has been a lot of discussion about GM offering LS7 powered Camaros in 2014. Like most Camaro enthusiasts, we at Lingenfelter believe one of the best ways to make a Camaro better is to add more power. We build Camaros every day for people that share the same beliefs.

At SEMA 2010, GM displayed a Camaro SS with the LS7 engine. Since that day Camaro enthusiasts around the world have been dreaming of an LS7 powered Camaro. Now a copy of a 2014 dealer VIN card surfaced showing an “E” code LS7 engine option for the 2014 Camaro. This information has spread across the internet like wildfire, and many people believe their dreams have come true. No one at GM has come forward to say yes or no.

Let’s look at the facts, both supporting and otherwise.

To support the claim, GM has announced the initial powertrain packages for the 2014 Corvette. They do not include the 427ci LS7 engine. The supercharged LS9 is not identified for the 2014 Corvette either. With Corvette not using the LS7, there would be engines available for another vehicle platform. GM does have a special plant in Wixom just to build LS7, LS9, and COPO Camaro engines. This would only leave the GMPP crate engines and COPO Camaro engines to be built in the Wixom plant. Adding the LS7 to the Camaro would help keep the plant in operation. With the Camaro scheduled for redesign in the near future adding the LS7 would increase sales and excitement for the 2014 model year. It would also give Camaro another hi-performance model to compete with the Mustang. At 505hp the engine would fit between the existing Camaro engines, and could be just the engine for the rumored Z28 Camaro.

On the flip side, the existing Corvette LS7 will not just bolt into the Camaro. Two crucial LS7 components will not fit into the Camaro. The Corvette dry sump and LS7 exhaust manifolds will not fit into the Camaro. Changing either of these could affect the power output of the engine. With the Corvette LS7 rated at 505hp, and the Camaro LS3 at 426, reducing the LS7 output would make one eliminate part of the advantage of installing an LS7. Add there is not a real good location in the Camaro for a dry sump tank, and the install becomes more challenging. New emission certification would be required to put the LS7 in a Camaro. This is a very costly and time consuming process. Don’t forget the engine cost, the GMPP LS7 lists for over $4000 more than the LS3. Upgraded driveline components would be necessary to deal with the power and RPM of the LS7. Add the expense of adding all the additional parts to the assembly plant and a production run of LS7 Camaros seem less likely.

Based on Ken Lingenfelter’s response, I suspect that many of our readers who are hoping for an LS7-powered Camaro Z28 are very encouraged. However, the facts that Mr. Lingenfelter pointed out including the possible difficulty in fitting the LS7 and all of its components into the Camaro engine bay coupled with the high price of the engine itself and the added costs of obtaining emissions certification could stand in the way of us seeing a 505 horsepower Camaro Z28 sitting on dealership lots anytime soon. Only time will tell but should more information become available – you will find it here on TorqueNews.com.

A special thanks to Ken Lingenfelter and his team for taking the time to address my question around this busy holiday season!