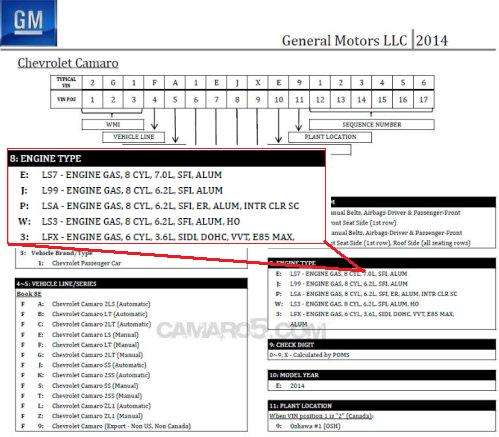 A document dug up by the Chevy lovers at Camaro5 suggests that the 2014 Chevrolet Camaro will feature the LS7 V8 that is currently only available in the Chevrolet Corvette Z06 but considering that the same document makes no mention of a new trimline that would use this new engine – we are left wondering just what GM has in store for the Camaro for the 2014 model year.
Advertisement

The document in question appears to be a VIN decoder form from General Motors for the 2014 Chevrolet Camaro. The form runs through the available trimlines and while there are no surprises there, when this form gets to the engine options we learn of the addition of the LS7 V8 measuring 7.0L. Based on this sheet, we are led to believe that the LS7 V8 will join the LFX V6 from the LS and LT models, the LS3 V8 from the manually shifted SS, the L99 V8 from the automatic transmission-equipped SS and the LSA V8 that is featured in the Camaro ZL1.

The addition of the LS7 V8 to the 2014 Chevrolet Camaro is big news in the American muscle car community but with no mention of a new trimline – what is GM going to do with the LS7? Since being introduced in 2006, the 427 cubic inch LS7 V8 has only ever been offered in the high performance Chevrolet Corvette Z06. Two years ago, we would have guessed that the LS7 would serve as the powerplant for some high end trimline but as it stands right now, the LS7 engine used in the Corvette Z06 provides quite a bit less power than the engine found in the Camaro ZL1. With 505 horsepower and 470lb-ft of torque, the LS7 makes the lightweight Corvette Z06 an incredible road racer but the Camaro is significantly heavier so the 427 cubic inch engine likely wouldn’t have the same incredible affect in a Camaro that it does in the Corvette. Also, considering the fact that the Camaro ZL1 packs 580 horsepower and 556lb-ft of torque, the LS7 would be overshadowed by the supercharged V8.

The 2014 Chevrolet Camaro Z/28?
Provided that the 2014 Chevrolet Camaro offers the LS7 as it appears in the current Chevrolet Camaro Z06, the power output would nestle it down neatly between the 426 horsepower LS3 from the Camaro SS and the 580 horsepower supercharged LSA V8 in the Camaro ZL1. This renews rumors that General Motors will revive the Camaro Z/28 - a rumor bolstered by the fact that General Motors recently renewed their trademark of the Z/28 moniker. The internet rumormill suggests that the Z/28 would be very similar to the current Camaro ZL1 with a high tech suspension and braking system but where the ZL1 draws its power from the (heavier) supercharged LSA V8, the Z/28 would pack the lighter LS7. Should GM tune the LS7 up a bit to get a touch more power out of it, this naturally aspirated, big displacement V8 could make for an ideal engine for the Z/28. Combine this Z06 engine with some other weight saving efforts, add in the high tech handling goodies from the ZL1 and you would have one incredible super Camaro with a lower weight and probably a lower price tag than the range topping ZL1. This leaves us wondering why the LS7 engine is mentioned on this form but the Z/28 trimline is not but perhaps late availability of the Z/28 trimline would cause GM to exclude that from this form at the present time.

The street-legal 2014 Camaro 427 COPO 45th Anniversary?
I should probably point out that the last time a 427 cubic inch V8 was offered in the Chevrolet Camaro was the COPO Camaro of 1969 so the 2014 model year will mark the 45th anniversary of the famed COPO Camaros. General Motors has already reincarnated the COPO Camaro for use on the track-only drag racing package with includes the optional 427 cubic inch V8 engine. Perhaps the LS7 will be used by General Motors for a 427-powered street legal Camaro designed to celebrate the 45th anniversary of the famed COPO Camaros of 1969? The original COPO Camaro was not a special trimline so if GM was going to introduce a special limited edition package for the 2014 Camaro with the LS7, they wouldn’t need to designate said trimline in the VIN decoder form that clued the world in to the addition of the LS7 V8 to the upcoming 2014 Camaro. GM could very easily offer a special package for the Camaro SS that does away with the standard LS3 or L99 V8 to make room for the LS7 V8 with the only other major changes being some badging and weight reduction that works to pay homage to the original COPO Camaro. This could be similar to the current 1LE package that is based on the Camaro SS so it is not an additional trimline and that would explain why there is no mention of a model powered by the LS7.

Regardless of the package or trimline, there is no question that a Chevrolet Camaro powered by the 427 cubic inch V8 would surely draw the praise of the Camaro and GM Performance communities. Considering how close the battle between the Camaro and the Ford Mustang has gotten over the past year, we can expect to see both companies making moves to help their muscle car stand out over the competition. Ford has taken a big shot at the halo muscle car segment with the 2013 GT500 packing 662 horsepower and 631lb-ft of torque. While the LS7 in its current form wouldn’t out-muscle the supercharged Shelby Mustang, this big displacement, lightweight engine could help a premium Camaro trimline compete closely with the GT500 without packing the same level of power.