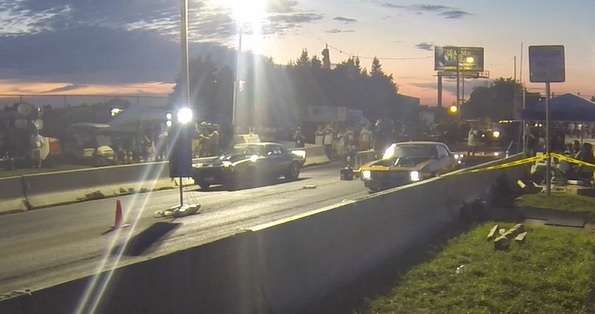 While this past weekend’s Roadkill Nights by Dodge focused on the title brand, one of the nastiest Chevrolet Camaro drag cars in the world was on hand to show off the capabilities of a 3,500hp twin turbo Chevy - drawing as much attention from the crowd as any car in the racing field.
Advertisement

The odds are good that if you are a Chevrolet enthusiast, a Camaro enthusiast, a GM performance enthusiast or a general enthusiast of high performance American muscle cars, you are familiar with Tom Bailey’s 1969 Chevrolet Camaro named Sick Seconds. This Camaro dominated Hot Rod Drag Week a few years back, setting the record for the world’s quickest street legal car with quarter mile elapsed times in the 6.40 range and trap speeds well over 200 miles per hour. This same car drove from stop to stop along the 2013 Drag Week tour of the US, handing out beatings at every stop en route to claiming the Drag Week title.

Even if it isn’t technically the quickest street car in the world, it is very close.

Sick Seconds Camaro Racing on Woodward
This past weekend’s Roadkill Nights by Dodge event had two drag racing classes – Dodge Cars Fast Four and Non-Dodge Cars Fast Four. The Dodge class paid $10,000 for first place while the non-Dodge class paid $500 to win, so there was an obviously high ratio of Dodge cars in the 350 vehicle field. Even with that in mind, there were a few impressive non-Dodge cars on hand, but none drew as much attention as the world’s quickest street car.

Although many of the spectators had Dodge or Mopar apparel, everyone can appreciate a classic American muscle car that can run mid 6-second quarter miles and reach speeds of nearly 240 miles per hour. Every time Tom Bailey’s Sick Seconds 1969 Camaro pulled into the burnout box, the crowd got fired up for one of the world’s nastiest street cars, regardless of what he was running against. While Bailey’s test shot against a Dodge Magnum wasn’t much of a race as it was an exhibition of power, Bailey would need to show off his racing skills later in the night as part of the non-Dodge Fast Four program.

Tom Bailey and his crazy fast 1969 Camaro cut through the non-Dodge group, making short work of a 2nd gen Camaro, a 4th gen Firebird, a 70s Malibu, a seriously quick diesel Chevy truck and his closest competitor in the class – a turbocharger AMX. Baily blasted through the crowd and took home the title of the quickest non-Dodge street car in the class.

If you didn’t make it to the M1 Concourse event for the 2016 Roadkill Nights by Dodge event in Pontiac, we caught a handful of Bailey’s runs and you can check them out on page two!

Craftsman62 wrote on August 31, 2016 - 9:38pm Permalink
Tom Bailey is definitely quick...and a class act. However, to my knowledge the fastest street legal car in America belongs to Larry Larson. He won Drag week 5 times in a row with his all steel Chevy II Nova. When everyone started running hybrid cars with fiberglass panels he built an S-10 that went 5.95 @ 244 in November of 2014. Taking nothing away from Mr. Bailey, maybe this article should rephrase to "One of the fastest" instead?
Craftsman62 wrote on August 31, 2016 - 9:45pm Permalink
Tom Bailey's car is beautiful AND fast...and he's a class act. I believe however that using the term "fastest" is a bit inaccurate. Larry Larson's S-10 recorded a 5.95 @ 244mph pass in November of 2014. To my knowledge Mr. Bailey's car has never cracked into the 5's. Taking nothing away from Mr. Bailey, I believe this article should reword it to say "One of the fastest", because that is exactly what it is.