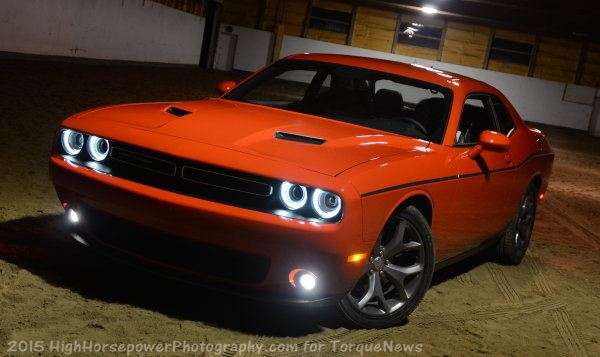 The Chrysler Group has issued a very small recall for the 2015 Dodge Challenger due to a concern that part of the airbag system may not have been installed correctly and if the airbag has not been properly installed, it may not provide proper protection in the event of an accident.
Advertisement

Due to the recall issues from both Toyota and General Motors over the course of the past decade, we are in an age of the automobile industry where any sort of cause for concern is also a cause for a recall – no matter how minor the risk may be. That is the case with the 2015 Dodge Challenger statement, as the Chrysler Group has issued this voluntary safety recall pertaining to just 81 cars, even though there have been no reports of problems with the airbag system in the real world while in the hands of private owners.

2015 Challenger Airbag Recall
The Chrysler Group discovered during routine internal testing that the bolts designed to secure the passenger’s side curtain airbag in place may not have been tightened correctly or they may not be present at all. Due to the location of the side curtain airbag in the Challenger (and most other vehicles) in the headliner trim, the side airbag system could be improperly secured and since it is covered, owners wouldn’t be able to see any problem. However, in the event of a hard side impact or a rollover, a side curtain airbag that has not been properly bolted up could open incorrectly – possibly providing reduced protection during the accident.

This problem was discovered on a batch of 2015 Dodge Challenger models made during a 10 day period, but no information on the exact build dates has been offered. We do know that approximately 81 Challengers are included in this recall with 72 cars in the United States, 6 in Canada and 3 in Mexico, but we don’t know what trimlines are included in this batch. Considering how a modern production line works, there is a good chance that there are Challengers of all sorts included in that group of 81 Mopar muscle cars which could be missing airbag bolts.

Most importantly, since this problem was quickly discovered during internal testing, there have been in injuries reported as a result of this possible airbag problem in the 2015 Dodge Challenger. To further insure that no Challenger owners are hurt by a problematic airbag system, an assembly line verification process has been added to the assembly line in Brampton Canada to check all of these bolts going forward.

For those with the affected vehicles, those 81 Dodge Challenger units around North American will be recalled and once back at the dealership, the technician will make sure that the passenger’s side curtain airbag is properly installed and bolted up.

JeffS wrote on May 22, 2015 - 8:46am Permalink
Kudo's to Dodge for recognizing this potential problem and addressing it immediately. Likewise to other manufacturers who are stepping up to the plate when it comes to, "voluntarily" issuing recalls for the types of problems that not too long ago would go unaddressed for far too long, if at all. With regards to these type of issues, there seems to be a new mind-set. I can't help to believe that the, "Takata" fiasco, (not the problem in this case), has something to do with that. Except for the poor people who were injured by Takada's airbags, maybe in the long run it, (as it appears to be) it will be a good thing, a, "wake up call" if you will. It appears the, "Bean counters" are being over ruled by a greater degree of, "Social" responsibility and that will serve ALL , both the Mfgs and consumers, well.