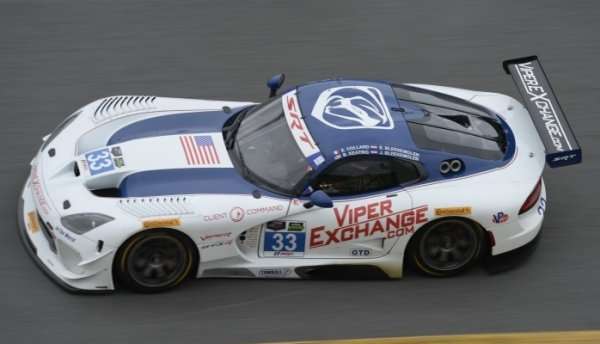 There Will Be a Dodge Viper in the Rolex 24

Right after winning the 2014 United SportsCar Championship GT title, Dodge announced the end of the factory Viper racing program and while those championship teams are still out of commission, there will be at least one Dodge Viper race car participating in the upcoming Rolex 24 at Daytona International Speedway.
Advertisement

The Dodge Viper GTS-R teams had a great season in 2014, with a streak of podium wins putting the #93 team taking home the championship in the GT class. Unbelievably, the celebration by Mopar racing fans was cut short as the Chrysler Group quickly announced that they would be discontinuing the factory backed endurance racing program. Just a few days after the Dodge Viper race program had reached the pinnacle – the program was dead.

This came as a hard hit to Mopar and Dodge racing fans who have been forced to endure the passing of the NASCAR program and the off-road truck racing program – both of which were also killed off immediately following championship seasons. The Viper program had so much promise, but when the Chrysler Group saw an opportunity to lower the price of the consumer-grade Viper simply by discontinuing a racing program, they said goodbye to the endurance racing program in a big hurry. Fortunately, the privately owned race team of Ben Keating's Viper Exchange will give Dodge racing fans someone to cheer for in the world of endurance racing.

Rumors of a Privateer GT Viper are Dead
Over the past few months, there were rumors that privateer race teams (non-factory backed) would buy up the Dodge Viper race cars from the championship campaign and go racing in the 2015 IMSA Tudor series, but a report from Motorsport.com says that it isn’t going to happen. The championship winning cars are still technically owned by the Chrysler Group and they are still sitting at the North Carolina shop of Riley Technologies, who builds all of the modern Viper endurance racers.

It is unclear what the future holds for the Dodge Viper GTS-R race cars, but it looks to be pretty definite that they will not be doing any racing in 2015. As a fan of the program, I am hoping that they are holding onto them in order to use the cars for testing and preparation for the return of a new Viper race car in the future. A boy can dream, right?

Viper in GT-D
While the quicker GT class will be without any Dodge Viper race cars for 2015, there will be at least one Viper in the GT Daytona class. Ben Keating will once again take to the track with his #33 ViperExchange.com Viper GT3-R race car (shown above) with Jeroen Bleekemolen sharing the driving duties throughout the season. This duo teamed up to win twice during the 2014 season in the GT-D class and the ViperExchange Viper could be a front runner in the 2015 IMSA Tudor United SportsCar Championship circuit.

The first event of the 2015 season is the Roar Before the Rolex 24, which is a celebrated test session at Daytona International Speedway on January 9th through the 11th. The first real race for the #3 GT-D Viper will come in January 11th when the Rolex 24 begins.

Tesla Contemplates A New Strategy for China Retail even As Sales Boom
Jay Leno on Elon Musk & EVs: “I Think He Should Get ... Credit"
END_OF_DOCUMENT_TOKEN_TO_BE_REPLACED