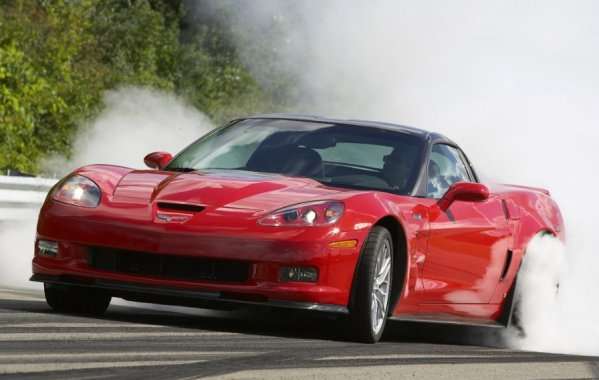 Thanks to the Hellcat Hemi Challenger, GM Needs a C7 Corvette ZR1

When the 2015 Chevrolet Corvette Z06 was introduced, GM said that there were no plans for a ZR1 since the new Z06 was the fastest Vette ever, but with the introduction of the new Hellcat Hemi-powered Dodge Challenger, GM will need a new ZR1 to pull ahead in the ongoing horsepower war.
Advertisement

The 2015 Chevrolet Corvette Z06 was unveiled at the 2014 North American International Auto Show as the most track capable Corvette of all time. Helping to prove that point is a new supercharged LT4 V8 that was promised in January to deliver at least 625 horsepower and at least 635lb-ft of torque. We found out last month that the 2015 Z06 will actually come with official figures of 650 horsepower and 650lb-ft of torque – so not only is the C7 Z06 the most track capable Corvette of all time, it is also the most powerful GM road car ever.

With those very tall claims in mind, it didn’t come as much of a surprise when the word surfaced that General Motors had no plans to build a ZR1 version of the 2014-2015 Corvette. After all, the 2015 Z06 is everything that the C6 ZR1 was and much more so there really didn’t seem to be any reason for GM to need to roll out an even more powerful Corvette – until this past Tuesday.

Sure, the 2015 Chevrolet Corvette Z06 is somewhere in the area of a thousand pounds lighter so while the Challenger Hellcat has a bunch more power, it will likely be slower than the Corvette in almost any racing venue. However, the American horsepower battle is more than who is just the fastest or quickest so being able to brag of having the most powerful American car on the market is a big deal for Chrysler and it would be an equally big deal for General Motors.

The C7 Corvette ZR1 Would Be Very Strong and Very, Very Light
Should General Motors opt to take a shot at claiming the title of the most powerful American production car, it would obviously have to provide more than the 707 horsepower that Challenger SRT Hellcat owners will enjoy. Realistically, coming up with a road ready engine that would produce somewhere in the area of 710 horsepower shouldn’t be all that hard for the high performance engine engineers at General Motors. Take the LT4, add some engine volume, jam a little more air through the supercharger and you would most likely have an engine that will allow the Corvette to win the latest battle in the American horsepower war. It seems doable and honestly, this is something that I fully expect to see in the next few years but if GM does roll out a ZR1, I expect it to be far more than just an engine upgrade on the current Z06.

I imagine that the advantages of the C7 Chevrolet Corvette ZR1 would only start with the 710+ horsepower engine and the even bigger story would be chassis and body refinements that would afford the new ZR1 a power to weight ratio that would compete with literally any sports car sold in the world. An entire body made from lightweight carbon fiber, interior components also made from more carbon fiber and a chassis comprised mainly of lightweight magnesium would take the already low curb weight of the 2015 Z06 and take it to shocking levels – the likes of which we have only ever seen in the world’s most expensive exotics…but from a Corvette.

This ultra lightweight direction mated with a blown V8 delivering more than 710 horsepower would allow a C7 Corvette ZR1 to be the most powerful American production car ever, the highest performance American production car ever and – most significantly – a supercar that would easily go toe to toe with the best from Lamborghini, Ferrari or any other European supercar builder.