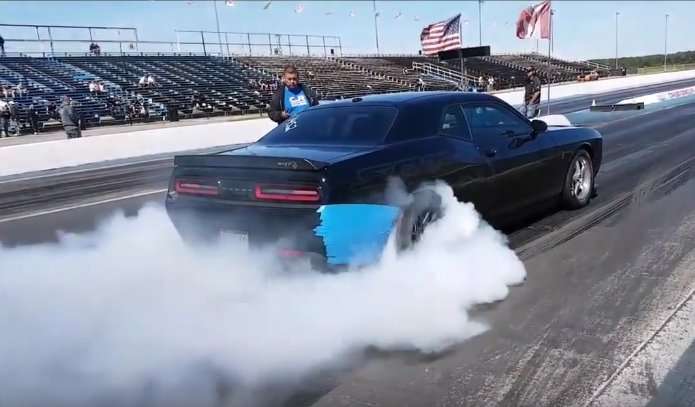 The Dodge Challenger SRT Hellcat owned by Malcolm Zack recently laid down a 10.47 quarter mile without any power-adding modifications and while he does have steeper gears, a stronger driveshaft and a healthy dose of weight reduction inside and out – this supercharged Mopar monster was able to run 10.40s with factory power.
Advertisement

The Dodge Challenger SRT Hellcat is certified by the NHRA as being able to run a fully stock quarter mile time with the factory Pirelli tires of 11.2 seconds. Swap on a set of drag radials and that official quarter mile time drops to 10.8 seconds, per FCA and the NHRA. However, many owners have found that with the stock tires, a Hellcat Challenger can run quicker than 11.2 and with drag radials, they will run quicker than 10.8 and that is without anything more than good tires, good air and some practice in getting off of the starting line.

Mind you, those Hellcat Challenger owners who have run 10.60s and 10.70s without changing anything other than the wheels and tires did so with stock power and, in most cases, stock or near-stock weight. On the other hand, Malcolm Zack’s Dodge Challenger SRT Hellcat is quite a bit lighter than stock, so even with stock power – he was able to get his supercharged Mopar muscle car down into the 10.40s

Malcolm Zack’s Record Setting Hellcat Challenger
Now, before getting into the impressive quarter mile times of Malcolm Zack’s Dodge Challenger SRT Hellcat, let’s talk about the car itself. When I say that it has stock power, I am simply pointing out that the supercharged Hemi engine has not been modified to make more power. Malcolm hasn’t tuned his car or added nitrous or a smaller pulley or anything else which would increase the power at the transmission. He has added a stronger aftermarket driveshaft, 3.09 rear gears and a set of lightweight rear wheels wrapped in sticky drag radial tires, as well as removing a bunch of weight from the car.

How much weight has he removed from his Hellcat Challenger? I really don’t know, but when I first met Malcolm Zack at the Michigan leg of the Modern Street Hemi Shootout, I got to check his car out in person. In fact, during a parade lap down the track, I got to ride in Zack’s car and in doing so, I saw just how much he lightened up the car. There was no passenger seat, nor was there any back seat, so for the parade lap, I sat on the elevated portion of the floor where the rear seat would normally be. There was also no glove box and in addition to the lightweight rear wheels, this Challenger also has lightweight front wheels with skinny tires. I believe that he may have had lighter brakes as well, rather than the massive Brembo’s which come on Hellcat cars.

In short, Malcolm Zack has trimmed a couple hundred pounds from his Hellcat Challenger, allowing him to get down the track more quickly than any other stock-power Hellcat I’ve seen. Mind you, I am not saying that his car is stock – as he has clearly made modifications – but it is running on stock power from the supercharged Hemi.

To be exact, on the run in the video below, Malcolm Zack’s Dodge Challenger SRT Hellcat runs a 10.47 quarter mile at 133.65 miles per hour – which I believe is the stock power quarter mile record for a Hellcat car. If someone has run quicker than a 10.47 with stock power, I’ve not seen it, nor has anyone else I’ve talked to about this record.

The bottom line here is that with a stronger driveshaft, 3.09 gears, sticky rear tires, a generous amount of weight reduction and a good driver, this Hellcat Challenger ran a 10.47 quarter mile – making it the quickest Hellcat car in the world running on the original 707 horsepower.