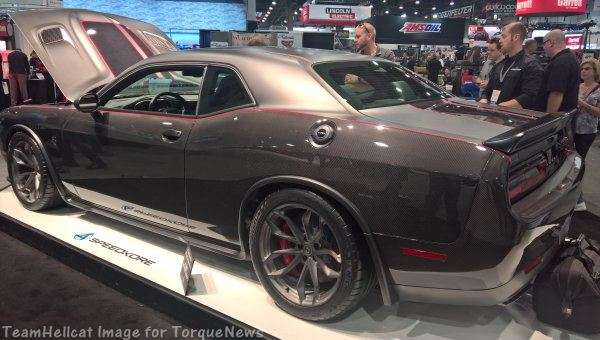 Mopar didn’t bring out a customized Dodge Challenger SRT Hellcat to the 2016 SEMA Show, but the crew from SpeedKore brought out their new carbon fiber bodied Challenger with a Whipple-blown Hellcat Hemi – and it is really the only Hellcat you Need to see from SEMA.
Advertisement

Leading up to the 2016 SEMA Show in Las Vegas, the folks from SpeedKore announced that they would be bringing a Dodge Challenger SRT Hellcat with a full carbon fiber body and while that teaser presented a pretty cool idea – the SpeedKore Hellcat Challenger in the flesh is a showstopper. This carbon fiber Mopar muscle car is an absolute beauty, but in cutting more than 600 pounds from the supercharged Challenger, this body swap is more functional than aesthetic.

The SpeedKore Carbon Fiber Body
As you can see in the image above, the SpeedKore Dodge Challenger SRT Hellcat has a full carbon fiber body swap. From front to back, each exterior panel has been removed and replaced with a lightweight carbon fiber piece. This includes the hood, the front fenders, the doors, the roof, the quarter panels, the trunklid and both “bumper” areas – much of which is clear coated to show the carbon fiber weave, while the roof, hood and trunk are painted matte black.

Finally, the SpeedKore Hellcat Challenger has a unique flare kit that runs along the bottom edge of the car, along with the in-house splitter and spoiler package.

That combination of huge weight reduction and wicked good looks is more than enough to make this Hellcat Challenger an eye-catching SEMA car, but SpeedKore wanted to make this car a showstopper – and they succeeded.

Improved in Every Other Way
In addition to cutting 600 pounds from the body of the Hellcat Challenger, SpeedKore added components in every other aspect of the car to improve performance even further. This includes custom carbon fiber seats, a Brembo carbon ceramic braking setup, an Eibach high performance suspension setup and lightweight wheels, but the big news is under the hood.

The SpeedKore team pulled the factory IHI supercharger off of the Hellcat Hemi and replaced it with a 4.5L Whipple supercharger. With a tune (and presumably some other modifications not included in the details), this Hellcat Challenger with the Whipple blower makes a whopping 1,100 horsepower.

Best of all, SpeedKore is currently planning to offer the more commonly replaced components, such as the fenders, the doors, the hood, the trunk lid and the fascias on a standalone basis. The quarter panels and roof, however, will only be offered as part of their full carbon fiber body package.

No pricing has been announced, but if you have a Hellcat Challenger and you are interested in these weight-saving carbon fiber body bits, contact the folks from SpeedKore via their website.

Warren Wright wrote on November 4, 2016 - 10:45pm Permalink
What is the skeletal frame composed of and how is it welded
Patrick Rall wrote on November 7, 2016 - 4:59pm Permalink
They didn't replace the unibody core structure. That is still steel, but the entire exterior skin is carbon fiber rather than metal (some aluminum, some steel).
Will Lacelle wrote on December 30, 2017 - 2:03pm Permalink
Good day !!! I have a 2016 HellCat Challenger and I've been looking for a set of carbon fibre side skirt kit After seeing you guys kit well WOW I want it !!!!! I like how you guys made a small fender flare part of the side skirt !!!!! Is it something you sell ? Thank you for your time !!!