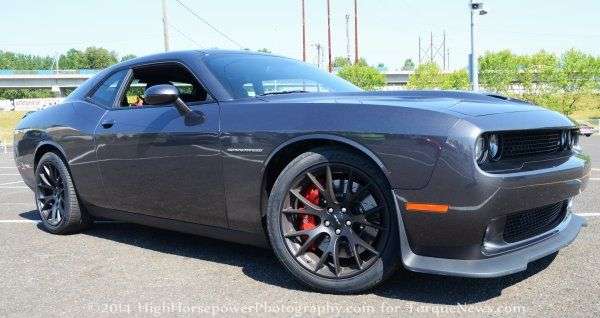 Even though the order banks for the 2015 Dodge Challenger SRT Hellcat haven’t opened yet, dealerships around the country are already taking orders for the 707 horsepower muscle car, but those hoping to reserve one of these Mopar monsters should be prepared to shell out some very big money – about $15,000 to be exact.
Advertisement

As soon as it was announced that the 2015 Dodge Challenger SRT Hellcat would “only” cost $59,995, the critics came out of the woodwork to ramble on about how no one will ever buy one of these 707 horsepower beasts for anywhere near that relatively low MSRP. Really, there is nothing profound about those views, as every new model demands a big dealership markup early on so there is no reason to think that the Hellcat Challenger wouldn’t be subject to those same initial markups.

Fortunately, I had a chance to speak with a salesman at a Chrysler/Dodge/Jeep/Ram dealership in Louisiana who offered me some insight on how they are handling preorders and how the competition is handling similar orders.

Preorder a Hellcat Challenger for $15k
In speaking with the salesman from a Dodge dealership in Louisiana, I learned that his dealership is currently accepting preorders for the 2015 Dodge Challenger SRT Hellcat even though the order banks aren’t open. The dealership obviously wants to make sure that the prospective buyer is serious, so they are requiring a down payment of $15,000 and of that 15 large, only $5,000 goes towards the purchase price of the 707 horsepower Challenger. In other words, ordering a Hellcat Challenger from this particular dealership will cost you a premium of $10,000 on top of the price of the car so that $61,000 base price grows to $71,000

The bright side is that if you are buying a Dodge Challenger SRT Hellcat from that dealership, $15,000 of that $71,000 is already covered so you only need to pay an additional $56,000 out of pocket once the car arrives. Of course, this is based on the fact that there will be no other additional dealer markups and that you do not add any options – both of which can and will take that $71k base price and help it ease up around $80k at the greedier dealerships. That is a lot of coin, but considering that you are ending up with one of the first units of the most powerful American muscle car ever, you should be expecting to pay big money for such a wicked performance car.

Some Dealerships are Charging Much More
While my source’s dealership is effectively adding $10,000 to the price of the 2015 Dodge Challenger SRT Hellcat, he pointed out that other dealerships in their general vicinity are adding a $20,000 markup to the 707 horsepower muscle car. Mind you, this is in Louisiana, so I would imagine that in areas with a bigger sports car market – or in areas where there are very few dealerships and very little access to the Hellcat – those dealership markups could run much higher.

The good news to this all is that the big dealership markups are likely to fade once the first wave of the Dodge Challenger SRT Hellcat has reached buyers around the country. Just like the early C7 Corvette Stingray, the first SRT Vipers and the first GT500 Mustangs, the first 707hp Challenger units will demand a big markup, but once the early rush buyers have gotten their fill – I fully expect to see MSRP be a very real option for the most powerful muscle car ever.

john oksen wrote on August 16, 2014 - 9:31am Permalink
Scumbags.! I hate when dealer s get greedy and over charge. Even back when the PT cruiser cane out they charged way over msrp because people wanted it. People shouldn't purchase from dealerships that do this. When I was in the market for a 2013 gt500 the same thing, but there are dealerships that don't do this. I did get one for msrp.. Walk away even if you can afford the over charge , let them drown in their inventory
Greg Anderson wrote on August 27, 2014 - 9:11am Permalink
I have the "cash" for the car I want to order. I'll not pay a dime over $62K plus taxes. They can sit on their cars and I'll sit in my CASH!
Antony wrote on September 8, 2014 - 2:29pm Permalink
Immediately after the official SRT Hellcat announcement was made, some dealers were indeed asking for $15k up front, and were indicating that only 1500 or so vehicles were going to be made. If you shopped around, however, other dealers were asking for much less of a down payment--all of which would be applied to the cost. After Dodge 'debunked' the rumors, however, even the previously-mentioned dealer called back and said they only needed $500 down to order and that they would NOT be marking up factory MSRP.
Gregory Anderson wrote on September 8, 2014 - 7:23pm Permalink
That's good to know. I will NOT pay a dime above MSRP.
Neil wrote on September 9, 2014 - 12:57pm Permalink
Dealerships are nothing more than middlemen. They are absolutely pointless. I can't stand to sit back and watch them con peoples money for no inherient purpose in life. When the manufactures wake up and allow customers to place orders for excact cars via the internet, both sides will be waaay happier. Manufacturer makes additional profit they deserve for making the product and the buyer gets a better initial price for the product. That's the way this needs to go....The car buying experience for most in absolutely excrushiating.