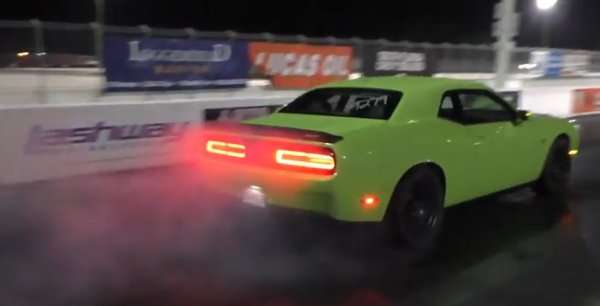 The Slow Hellcat Challenger Owner Wants a Rematch with the Tesla

About a month back or so, a video hit YouTube showing a Tesla P85D beating the tar out of a poorly driven Dodge Challenger SRT Hellcat, but a new video showing that same 707 horsepower Challenger has it running proper quarter mile times – and reportedly wanting a rematch with the 691hp Tesla.
Advertisement

Back in mid-January, a video surfaced showing a Tesla Model S P85D drag racing against a 2015 Dodge Challenger SRT Hellcat on the quarter mile, and when the Hellcat driver showed his gross incompetence in launching his 707 horsepower muscle car, the electric sedan ended up handing out a brutal beating. With all-wheel drive, the Tesla Model S P85D makes good use of all 691 horsepower, rocketing down the quarter mile in the mid 11 second range while the Challenger bumbled its way down the track a few seconds later. This was a record quarter mile run for the $100k+ electric luxury sedan, but in all reality, the Tesla beat the inexperienced driver of the Hellcat Challenger – not the car.

The Challenger SRT Hellcat is rated by the NHRA as being an 11.20 car in stock form, but that is with a driver who knows how to get away from the line. This driver didn’t know how to launch, and that gave the electric car segment a rare chance to claim a victory in a drag race. We are bound to see plenty more P85D videos showing the newest Tesla sedan beating up on slower gas-powered cars, but the Hellcat Challenger should be able to beat the all-wheel drive Model S.

Fortunately, the driver of the Hellcat Challenger in that fateful viral video knew that he had embarrassed the muscle car community, so he has spent the past few weeks practicing and now his 707 horsepower Mopar muscle car is turning far better times.

Practice Makes Perfect
When the 2015 Dodge Challenger SRT Hellcat got crushed by the Tesla Model S P85D on video last month, the problem was that the driver of the Challenger didn’t know how to get away from the line. I have had the pleasure of making a few quarter mile runs in the Hellcat Challenger on an unprepped track, and launching was a real chore. You had to basically roll out through first and second gear, before getting into the full throttle at the top end of second gear. Driving that way, I was only able to muster an 11.80, but plenty of Hellcat owners have run in the deeper 11s in stock form.

Since becoming the most famous Hellcat Challenger owner who wasn’t a celebrity beforehand, the owner of this new Mopar muscle car wanted to show that he could get down the track. According to the details, the owner of this Sublime Hellcat Challenger got into the 11s with the stock tires, but he wanted to go even quicker. With the addition of a set of Nitto 555R street tires, he has been able to get away from the starting line much more quickly, and the result is a quarter mile time of 10.86 at 127 miles per hour.

Ed Hart wrote on February 17, 2015 - 11:25pm Permalink
Word In the Tesla world is that the Tesla driver is ready, too. Not only is he disconnecting the creep feature to speed the application of power, he is reducing weight by taking out the two child seats in the back and taking his overnight luggage out of the frunk before the next race.
Patrick Rall wrote on February 18, 2015 - 10:32am Permalink
I sincerely hope that he can make changes to run better than 11.60s. A close race would certainly be more interesting than another blowout.
mike w wrote on February 18, 2015 - 9:12pm Permalink
So does anybody know if the Model S P85D will launch faster if the street tires are replaced with semi-racing slicks like the Hell-cat owner has done?
Giovanni wrote on February 20, 2015 - 5:11pm Permalink
I don't think the Tesla would benefit greatly by changing the tires, since it doesn't have the issue of "spinning the tires" at launch, as it's an all-wheel drive.In essence, it doesn't need "better traction" since it already has it.
StanO5 wrote on February 19, 2015 - 12:49pm Permalink
Therein lies the beauty of the Model S, a beginner can launch it like a pro. Performance ICE vehicles require a checklist performed flawlessly.
Ace99 wrote on February 25, 2015 - 10:38pm Permalink
Must be a tesla fanboy, why not awd to awd. Gtr-nismo will eat the tesla for lunch. Beginner can launch it like a pro.