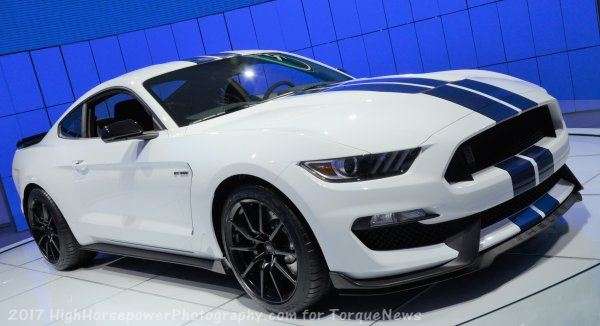 The law firm Hagens Berman announced yesterday that in cooperation with Grossman Roth Yaffa Cohen, they will be representing a group of 2016 Shelby GT350 Mustang owners who have filed a class action suit against Ford Motor Company due to the fact that their muscle cars are prone to overheating transmissions and differentials – forcing the car into limp mode and putting the drivers at risk.
Advertisement

Since the modern Ford Shelby GT350 Mustang was introduced, it has been marketed as a muscle car built for the road and the road course, just like the first Shelby Mustangs back in the 1960s. I have had the pleasure of riding along with a professional driver in the new GT350R on a road course and it is truly a remarkable vehicle, but it turns out that some owners of the non-R Shelby Mustang aren’t finding their ownership experience quite as remarkable.

In fact, they are so unhappy with their 2016 Shelby GT350 Mustang that they have banded together to file a class action suit against Ford Motor Company. The law firms representing these Mustang owners include Hagens Berman –the same group which represented Toyota owners in the unintended acceleration lawsuit, which resulted in a $1.6 billion settlement with the automaker. This firm is also working with owners of Volkswagen and Mercedes Benz products for their diesel emission issues, along with General Motors owners who are suing over the ignition switch issues.

“Shelby owners sought these vehicles specifically because they appreciate fast cars and the legacy of the Mustang, and wanted to own a piece of racing history – to live the dream of being able to own a car that could be used for everyday driving and also had the power and performance for the racetrack,” said Stuart Grossman, founder and partner at Grossman Roth Yaffa Cohen. “What Ford sold them was nothing of the sort.”

Unhappy GT350 Owners
The cause for this class action suit against Ford Motor Company relates specifically to the Shelby GT350 Mustang and not the GT350R models, which are equipped with a transmission and differential cooler from the factory. The “regular” GT350 does not come with the transmission and/or rear differential cooler and owners have found that during short stints on a road course, each of those vital components get too hot. They get so hot that the vehicle’s on-board diagnostic system recognizes the danger and forces the Mustang into limp mode – cutting engine power and slowing the car down dramatically.

Having the Shelby GT350 go into limp mode can be dangerous for the driver and the other vehicles around the Mustang when it loses power, but it is also very frustrating to a group of owners who bought what they believed to be a track-ready road car – only to have it go into limp mode after a short time on the track.

According to the complaint:
“Mustang testimonial websites and Ford customer service files are replete with complaints from consumers who reasonably believed that their Class Vehicles would in fact be ‘Track-Ready,’ but have been put at risk of accident on race tracks and during non-track driving when the defective transmissions and rear differentials overheat, causing the cars to go into Limp Mode at drastically reduced speed and performance.”

This lawsuit pertains specifically to the 2016 Ford Shelby GT350 Mustang in base model form or with the Technology Package – both of which would not include a transmission or rear differential cooler. Ford does recommend that if you have a 2016 GT350 with the Technology Package, you should add a transmission and differential cooler for track use, but it seems that some owners ignored that and found out what happens when you push the car hard at the track without them. The more heavily track-purposed GT350 comes with those coolers, as do all of the 2017 Shelby Mustangs.

“When Ford marketed and sold these Shelby GT350 Mustangs, it knew exactly how to appeal to track-enthusiasts: it marketed enhanced performance in a limited-edition iconic vehicle that has been associated with racing for generations,” said Steve Berman, managing partner of Hagens Berman. “We believe that Ford induced purchasers with its ‘track-ready’ marketing, when in fact it knew that this defect would ultimately bar these Mustangs from ever being the hotrod consumers paid for.”

"Ford's only answer to owners has effectively been, 'pay for a fix on your own dime,'" Berman added.

The exact grounds for the suit are fairly technical and I am no lawyer, so rather than try to explain them, here is what the law firm stated:
"The lawsuit seeks reimbursement and all damages permitted by law for vehicle owners, including diminution in value of the affected Shelby GT350 Mustangs and/or loss of the benefit of the bargain, in an amount to be proven at trial to compensate owners for Ford’s fraud that put drivers at risk. Plaintiffs also seek an order enjoining Ford’s deceptive marketing and sales acts and practices, as well as punitive damages."

Should any new information on this topic arise, you will find it here on TorqueNews.com.