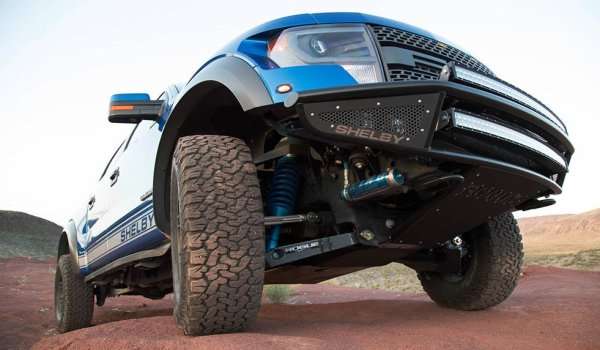 The 2017 Ford SVT Raptor F150 will derive its power from a specially tuned 3.5L EcoBoost V6, but the 2014 Raptor was powered by a 6.2L V8 and that older V8 pickup is the one that Shelby American has used to design their new Baja 700 package – with 700 horsepower and an off road suspension setup that make it the baddest truck on the road and off.
Advertisement

The SVT Raptor pickup was last offered by Ford Motor Company for the 2014 model year and it is slated to return as a 2017 model year vehicle, leaving fast truck fans without a new option this year. Fortunately, the folks at Shelby American have used their vast Ford performance expertise to design a new upgrade package for the F150 Raptor and with 700 horsepower the Baja 700 package is one of the most powerful options on today’s market for Ford fans. Of course, this isn’t quite as good as a new factory built performance truck, but for those folks who want an F150 that will keep up with almost anything on the road, this new Shelby Raptor package should be a very interesting proposal.

The Shelby Baja 700 Raptor F150
The previous generation Ford SVT Raptor F150 was powered by a 6.2L V8 that delivered 411 horsepower and 434lb-ft of torque, making it one of the most powerful factory trucks sold in America. In addition to being the most off-road capable stock trucks sold in America, the Raptor F150 can hold its own on the road as well, but the lighter, smaller trucks like the Ram 1500 Express with the Hemi pose a tough fight for the heavier, four wheel drive Raptor.

Enter the Shelby Baja 700 Raptor package.
The Raptor isn’t really made for on-road performance, but those SVT F150 owners who want to be able to beat up on the neighbors Corvette, Shelby American has the answer. The Baja 700 package adds a new supercharger, a new throttle body, larger fuel injectors, a larger heat exchanger and high flow Borla exhaust – increasing the output to a whopping 700 horsepower. Even with the weight of the Raptor package, 700 horsepower will allow these specially prepared Raptors to beat the vast majority of vehicles on the road in a straight line, whether you are racing on a drag strip or on the beach.

The other key problem is that the Raptor Baja 700 will have supercar-like exclusivity, with only 50 units planned for production, so if you have a 2014 Raptor and you want to turn it into a supercar-eating off-road beast, contact Shelby American right away to reserve your package.