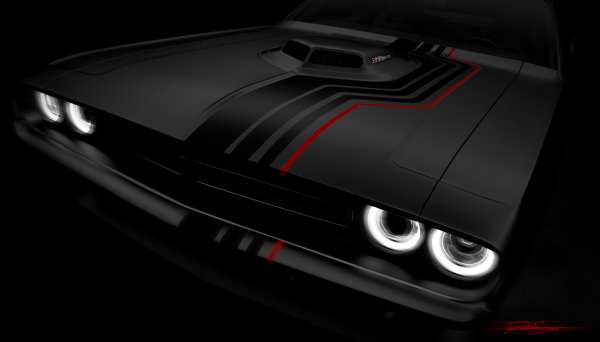 The Mopar crew is headed to SEMA next week and the menacing looking Dodge Challenger teased in the shadowy image above prefaces something exciting for the muscle car world – although it is hard to tell what that might be from this sole image.
Advertisement

FCA rolled out a small collection of images teasing some of the vehicles headed to next week’s SEMA Show and among them is the Dodge Challenger shown above. All we know from the accompanying material is that this Challenger will be “modified with Mopar production and concept products”, so the best that we can do is make some guesses at what will make this Dodge muscle car shine at the 2016 SEMA Show in Las Vegas.

The SEMA Dodge Challenger
So first, the most prominent features of this Dodge Challenger SEMA teaser are the halo-style headlights, Shaker hood scoop and the grille design of the 2017 Challenger. While it is hard to see in this small picture, the full size image of this Challenger teaser reveals the 392 Hemi logo on the Shaker scoop, so this appears to be a 2017 Challenger 392 Hemi Shaker car with a unique stripe design running down the middle – including a red stripe on the driver’s side. It does appear as though that Challenger has slightly different sculpting on the hood, but this appears to be an artist’s drawing, not an actual photo, so that could be something drawn in for impact.

Really, there doesn’t appear to be anything out of the ordinary here compared to the average 392 Shaker Challenger, but I cannot imagine that Mopar would bring out a production car with a striping package to SEMA. We have already seen the new Challenger T/A 392 arrive, which is based on the 392 Scat Pack Challenger, so perhaps Mopar has designed a higher performance model similar to the new T/A with the Shaker hood.

Of course, since it is SEMA, I would expect that this Dodge Challenger Shaker has some unique wheels, maybe a lower setup of some sort and a dressed up interior – as pretty much every show vehicle at SEMA has at least something changed in each of those areas.

In any case, we know that Mopar will have at least one mean-looking muscle car in their sprawling display at the 2016 SEMA Show. Next week, we will find out all of the information on this Challenger and the rest of the Mopar SEMA vehicles when the Las Vegas convention opens.