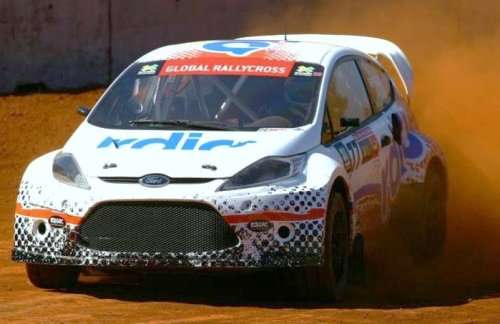 Although the first Global RallyCross event of the 2013 season at X Games Brazil was packed full of championship rally racers from around the world – GRC newcomer and NASCAR/F1 regular Scott Speed pulled out an incredible last turn pass of GRC regular Toomas Heikkinen to claim X Games gold in his very first RallyCross race.
Advertisement

The Global RallyCross format consists of a handful of short heat races followed by the last chance qualifier with the winner and runner up of each of those early races continuing on to the event finale. To kick off the 2013 GRC season, the drivers headed to Foz Do Iguacu in Brazil for the first stop in the 2013 X Games Series with 15 drivers showing up to battle for the first win of the 2013 season. Unlike GRC events in 2012, the X Games Brazil course was almost entirely dirt with only a small patch of asphalt that served as the starting grid and the finish line – a fact that would seem to favor the more experienced off road racers like Ken Block, Brian Deegan and Tanner Foust but things didn’t shake out too well for any of last year’s top drivers from the GRC.

Heat Races
The action got off to an early start when Ken Block, Toomas Heikkinen and Liam Doran lined up for the first heat race of the weekend. Veteran GRC fans can imagine that whenever “Topi” Heikkinen is in a race you are going to have a crash and the young Finn did what he does best when the green light lit – over-aggressively cutting hard across the front end of both Block and Doran as the drivers headed for the first turn. This forced Doran off of the track into the barriers and effectively took him out of contention. After shoving the competition out of his way, Heikkinen drove his Ford Fiesta ST rally car to an easy heat win with Ken Block (also in a Ford) finishing second – both of whom would stamp their ticket to the final race.

In heat 2, Bryce Menzies, Travis Pastrana, Brian Deegan and Nelson Piquet Jr. lined up with both Menzies and Pastrana in Dodge Dart rally cars while Deegan was in his familiar Ford and Piquet was the only Mitsubishi entry in the field. Piquet was seemingly unfamiliar with the starting line procedure and left the line way too early. This required him to pull his Evolution X into the penalty box for a stop and go penalty and that was enough for 2012 X Games gold medalist Brian Deegan to take the lead and a very, very easy win in the day’s second heat. Travis Pastrana would finish second to guarantee his spot in the finals while the other two would have to rely on the last chance qualifier. Heat number 3 brought out 2012 Global RallyCross season champion Tanner Foust in his Ford Fiesta ST (above) against Steve Arpin (Ford), Patrik Sandell (Ford) and Mauricio Neves (Peugeot). These four were the first to get in and out of the tricky first corner cleanly with Foust taking the early lead that quickly turned into a landslide heat win for last year’s champ while Arpin would join Tanner in the finals in finishing second.

The fourth and final heat race of the X Games Brazil Global RallyCross event was the most exciting of the four qualifying races with four newcomers to the GRC battling for the last two guaranteed spots in the finals. This race featured NASCAR driver Scott Speed in a Ford Fiesta ST (shown above on the right), local favorite Edu Marques in a Peugeot and a pair of Volkswagen Polos driven by Buddy Rice and Anton Marklund (below). Scott Speed got off to a great start as the drivers hit turn one but an aggressive dive by Buddy Rice spun Speed completely around as the drivers came out of the first turn. In a short heat race, that would seemingly kill any chance that Speed had of going through to the finals without the help of the LCQ but as his name would indicate – Speed was very fast. In just a few laps, he had battled his way up into the second spot which would have been enough to get to the finals but on the white flag lap, Scott Speed and his Ford Fiesta ST ducked around Anton Marklund’s VW in the final turn when Marklund got too wide – giving Speed his first career GRC heat win. Marklund would finish second but most importantly, Scott Speed showed just how well he was learning the GRC ropes in his first official race. Last Chance Qualifier
The last chance qualifier (LCQ) brought back all of the drivers who failed to finish first or second in their respective heat races with seven competitors lining up in two rows to fight for the final two spots in the final race. On the front row of the starting grid was Liam Doran, Nelson Piquet Jr, Buddy Rice and Patrik Sandell while Bryce Menzies, Mauricio Neves and Edu Marques started in the second row. On the start, Liam Doran stalled his Citroen and as a result, Bryce Menzies (who had gotten a good, hard launch) slammed into the back of Doran’s vehicle – effectively ending both of their hopes of winning X Games gold in Brazil. This allowed Buddy Rice to drive to an almost uncontested win while Sandell battled Piquet to take the second spot.

The Finals
In the finals, ten drivers lined up to fight for X Games gold with some of the biggest names in the world of both rally racing and the X Games set to do battle. The front row consisted of Scott Speed, Tanner Foust, Brian Deegan and Topi Heikkinen. The second row had Steve Arpin, Ken Block, Anton Marklund and Travis Pastrana while the third row was occupied by Buddy Rice and Patrrik Sandell. Heikkinen started on the outside of the first row and – not surprisingly – his typical damn-the-rules driving style was on full display as the field headed for the first turn. As he did in the first heat race of the day, Topi slammed his Ford Fiesta into the cars to the inside of him, causing Deegan to run down into Foust and causing a huge crash in the first turn that sent cars off of the track in every direction. The result of yet another cheap Heikkinen driving maneuver was that all of the biggest names in GRC had their cars so badly damaged that the race was red flagged. Foust, Block, Pastrana and Rice were all forced to leave the race due to mechanical problems caused by Topi’s big crash so when the field restarted the race – only 6 cars remained in the field. This set up a 6 lap shootout between those drivers left and with only two GRC regulars left in the field (Deegan, Heikkinen), it seemed like it would be a far less exciting race. On the restart, Heikkinen dove to the inside behind the other drivers rather than just slamming into them and he was able to come out of turn one with a lead. Scott Speed and Steve Arpin sat in P2 and P3 while Deegan dropped back a bit into the field. Three laps into the shortened final race, it looked like cheap shot specialist Toomas Heikkinen would drive to an easy win but Scott Speed wouldn’t go away. Speed chipped away at Topi’s lead and on the last lap – in the very last turn – Scott Speed set up a beautiful perfect pass on the inside of Heikkinen in the to take the win away from the Finn just yards from the finish line. Not only was this a perfect move but having watched Heikkinen turn Global RallyCross into a demolition derby once again – I couldn’t have been happier to see him lose the win in the final turn of the race.

As they crossed the finish line, Scott Speed claimed X Games Brazil gold in his first ever RallyCross race while series veteran Toomas Heikkinen was forced to settle for silver. Patrik Sandell came across third to grab the bronze. The second stop on the 2013 Global RallyCross schedule is set for X Games Barcelona and while the Spanish X Games takes place on May 16-19 there has been no set date or time for the Global RallyCross race. In any case, you can be sure to find all of your GRC coverage here on TorqueNews.com!