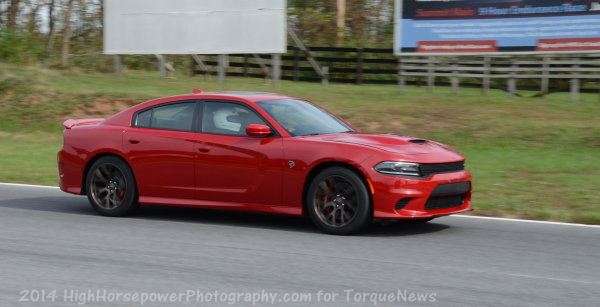 Across the many comments I have seen posted online pertaining to the 2015 Dodge Charger SRT Hellcat and the 2015 Dodge Challenger SRT Hellcat, there are a select few who ramble on about how the 707hp Mopar muscle cars cannot use the power and having driven both of the Hellcat cars on a track – I can assure you that making comments like that only make you sound like a fool.
Advertisement

Making Use of Power
When someone who knows what they are talking about says that I car cannot make use of the power, they are saying that the car is simply too powerful to turn that power into forward thrust and with 707hp, there was a good chance that the 2015 Charger and 2015 Challenger could fall into that category. Cars that cannot make use of lots of power aren’t good for anything but big, smokey burnouts. For example, if you wedged an NHRA funny car motor with 10,000 horsepower into the engine bay of a Ford F150 without performing any other modifications, it wouldn’t be able to make any use of the power. As soon as you touched the throttle, the back tires would just endlessly spin. That would just plain make a car (or truck) dangerous, and that is why we don’t see automakers offering up more models like the Bugatti Veyron.

While both the Hellcat Challenger and Charger will roast the rear tires as well as any production road car in America, the performance times and my experiences with each car on a road course serve as proof that these cars make very good use of all of that power.

Proof is in the Performance
The 2015 Dodge Charger SRT Hellcat seems to get the most shots about not being able to use the power, but those claims are totally unfounded. With 707hp, this is the most powerful 4-door production sedan in the entire world, EVER. Now, if the Charger couldn’t make good use of the Hellcat horsepower, it wouldn’t be able to back up those power numbers with real world performance numbers. However, in addition to being the most powerful, the Charger is also the fastest sedan in the world with a top speed of 204 miles per hour while an NHRA certified quarter mile time of 11 seconds flat makes it the quickest sedan in the world.

When the most powerful sedan in the world is also the fastest and the quickest as well, it is hard to argue that the Hellcat Charger cannot use its power. If it was the most powerful sedan, but it was slower than several other cars in the high performance sedan segment, that argument would be valid. It is the best performing sedan in the world, so the argument is totally unfounded.

The battle for the 2015 Dodge Challenger SRT Hellcat is tougher due to the greater number of high performance coupes in the world, but the 707hp still lays out performance numbers to prove that it can use that power. With an NHRA certified stock time of 11.2 seconds with the stock tires and 10.8 seconds with drag radials, the Hellcat Challenger is the quickest American muscle car ever. The Ford Mustang Shelby GT500 packs 662hp and runs a slightly slower stock quarter mile time in the 11.5-11.6 range while the 580hp Camaro ZL1 is a stock low 12 second car. Even though the Challenger is bigger and heavier than both of the other Detroit muscle cars, it is still able to outrun both of them in the quarter mile by a pretty significant margin. The Lamborghini Aventador has slightly less power than the Hellcat Challenger while also weighing far less and having all wheel drive, and it will outrun the Challenger in a quarter mile race, but that doesn’t mean that the Challenger isn’t making good use of its power – it just means that the $400,000 Lamborghini makes a little better use of it.

In short, if you haven’t driven a car in an environment where you can push it to its limits, don’t make stupid comments about how the 707hp Dodge Challenger or Dodge Charger cannot use the power. The fact that they are able to compete (or crush) the competition in real world performance conditions is all the proof that they need and just because you know a guy who knows a guy with a 700hp Mustang that runs 9s, doesn’t mean that a production road car should be able to do the same.

JeffS wrote on November 11, 2014 - 10:35am Permalink
The postings you refer to would more accurately read; "There are DRIVERS that will not be able to make full use of the horsepower". (That's not a slight on any driver out there, but unless you are accustomed to driving this kind of big horsepower, there will be a learning curve). Even that is not entirely accurate, one need not be driving at terminal velocity or stomping on it from a stop to see the benefits, (performance wise), of the power the Hellcat has to offer. I would assume there will be many Hellcats in which their owners will never explore the car's ultimate capabilities. It is as much about the dream as it is the actual capabilities of the car or driver. "Oh what a Dream".
don bj wrote on November 11, 2014 - 11:42am Permalink
watch when the real world unpracticed drivers try to run down the 1/4 mile on street tires, the hellcat cars will get into the high 11's far short of what a well prepped track and car has done with the 8 speed automatic. Throw a 6 speed manual into the car and the cars will be even slower.
L.L. wrote on November 11, 2014 - 9:46pm Permalink
So What's your point???
DrivingBy wrote on November 11, 2014 - 11:32pm Permalink
If one is gearhead enough to buy either of these, one will likely spring for a set of DRs or wrinkle-wall slicks on smaller wheels, which just happen to clear the rear brakes. Drag slicks, the automatic and a little practice will make for some sharp times even for an age 50-65 driver. And that's before someone unlocks the ECU. Anything under 11 seconds in the 1/4 is truly fast for a car with plates insurance and working AC. All that and a warranty, amazing.
JeffS wrote on November 12, 2014 - 8:04am Permalink
DrivingBy, EVEN for an age 50-65 driver? Take it easy on us, "Older" motorheads, we can still teach the Young Bucks a thing or 2. There is no substitution for experience, and many of us aren't ready to go out to pasture yet. Be Well.