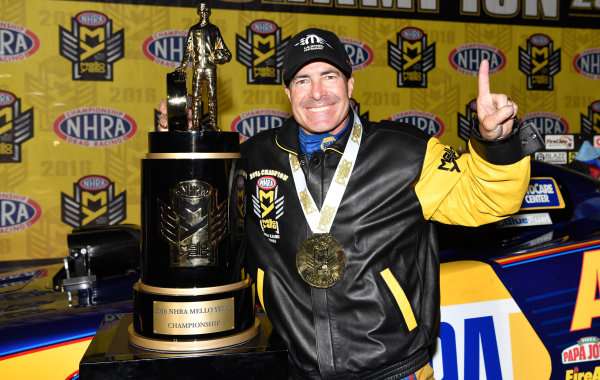 This past weekend in Pomona, California, Ron Capps and his Don Schumacher Racing Dodge Charger R/T claimed the 2016 NHRA funny car championship for the first time in the driver’s storied career – and his 3 DSR teammates all joined him in the top 5 of the final season standings.
Advertisement

The Don Schumacher Racing funny car drivers dominated the season last year in their Dodge Charger R/T race cars, but fell short in the Countdown to the Championship portion. This year, the four DSR drivers held strong down the stretch and as a result, all four of them finished in the top 5 in the final standings while Ron Capps claimed the season championship – the first of his career.

Ron Capps came into Pomona for the AAA Auto Club Finals with a lead in the championship race, and while his DSR teammate Matt Hagan had a chance of catching him – there was a good probability that Capps was going to take home the title. All Capps had to do was outlast Hagan in the final event of the season, so when Hagan lost in the first round, Capps had clinched the title.

The Final Event of 2016
As has been the case all season, the DSR Dodge Charger funny cars came out flying in Pomona, with Ron Capps, Tommy Johnson Jr. and Jack Beckman grabbing the top three spots in the 1st round of qualifying. In round #2, John Force jumped up into the 2nd spot and Matt Hagan moved into the top 5, but that Mopar party was spoiled in round #3, when Courtney Force and Robert Hight drove their Camaros into 2nd and 5th. After round #3, Beckman was on top, followed by the two Force Camaros, Ron Capps’s Charger and Robert Hight’s Camaro, but before qualifying ended, Tommy Johnson Jr drove his Charger up into the 3rd spot.

Qualifying was a great battle between the Dodge Charger and Chevrolet Camaro teams, and that fight would continue into eliminations and all of the way to the finals.

In the 1st round, the only loss of note was Matt Hagan, who ran into problems and lost to Jeff Arend, ending Hagan’s championship hopes and securing the title for Ron Capps. It didn’t make any difference, but Capps won in round #1, so he sort of sealed the title with a round win.

In round #2, the action heated up with Jack Beckman beating Tim Wilkerson’s Ford Mustang and Courtney Force’s Camaro beating Jeff Arend’s Toyota. In the Camaro-Dodge battle, John Force knocked out Ron Capps while Tommy Johnson Jr beat Robert Hight, setting up another pair of Dodge-Chevy races in round #3.

John Force took on fast qualifier Jack Beckman and after Force took the starting line advantage, Fast Jack ran into traction issues and watched the Camaro take the win. On the other side of the ladder, Tommy Johnson Jr pulled an amazing .009 reaction time and beat the quicker Courtney Force, setting up one final Dodge Charger – vs – Chevrolet Camaro funny car battle for 2016.

So, in a season where Don Schumacher Racing drivers once again dominated the funny car class, Ron Capps was able to finally nail down his first championship of his long, successful career and while he didn’t go out with a win, he got to enjoy his title while teammate Tommy Johnson Jr celebrated one more win in a great season.

Best of all, it looks like we have one heck of a great rivalry brewing between the Chevrolet Camaro teams of John Force Racing and the Dodge Charger teams of Don Schumacher Racing – one that we hope to see plenty more of next season!