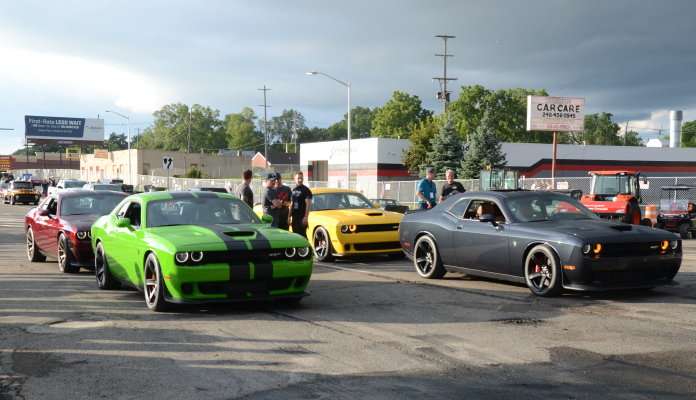 The Celebrity Hellcat Shootout at the 2017 Roadkill Nights by Dodge event near Detroit was punctuated due to hard rains late in the evening, but in settling for a split title, NHRA driver Matt Hagan and YouTube show host Tony Angelo each contributed $5,000 to their charities – while also making a couple good, strong runs in the Dodge Challenger SRT Hellcat.
Advertisement

This past weekend, the internet show Roadkill held their 3rd automotive festival in the Metro Detroit area, featuring the 2nd year of legal street racing on Detroit’s Woodward Avenue. In addition to the regular racing program racers coming from all over the area, Roadkill 2017 featured the Celebrity Hellcat Shootout. This shootout included 8 celebrities from the automotive world racing head to head in Dodge Challenger SRT Hellcats on Woodward Ave, with the winner receiving a prize of $10,000 for the charity of their choice.

I was there in person to cover the Roadkill Nights 2017 event and unfortunately, hard rains hit the area around 8:30pm – right after Matt Hagan won to advance to the finals – and the track was too wet to continue racing. As a result, the final round of the Celebrity Hellcat Shootout didn’t take place, so instead of one charity group receiving $10,000, two charities each received $5,000.

The Competitors
The biggest celebrities in the Roadkill Nights by Dodge Celebrity Hellcat Shootout were NHRA drivers Matt Hagan and Leah Pritchett, both of whom race for Mopar-backed Don Schumacher Racing. Joining those two NHRA drivers were Mike Finnegan and David Freiburger of Roadkill, Tony Angelo and Lucky Costa of Hot Rod Garage (internet show), Mike Musto of House of Muscle (internet show) and Chris Jacobs of TV’s Overhaulin.

Round 1
In the first round of the Celebrity Hellcat Shootout, Leah Pritchett spun the tires at the starting line and lost in a big upset to Tony Angelo, but her DSR teammate Matt Hagan made short work of Mike Finnegan. Roadkill’s other host, David Freiburger, beat Lucky Costa and Chris Jacobs lost to Mike Musto. You can watch each of those runs in the videos below.

Round 2
In the semifinals, Matt Hagan laid down another great run to beat David Freiburger – meaning that the NHRA champ knocked out both of the Roadkill hosts – while Tony Angelo beat Mike Musto. This set up a battle in the final round between NHRA driver Matt Hagan and YouTube show host Tony Angelo. You can watch each of those runs in the videos below.

Unfortunately, that final run never came, as the hard rains which pummeled Woodward Ave around 8:30pm proved to be too much for the crew to dry out in the dark, so the remainder of the racing for the evening was cancelled around 10pm or so. At that point, it was announced that both Hagan’s charity and Angelo’s charity would each receive half of the $10,000 prize – so each of the semifinal winners grabbed $5,000 for their chosen charity.

Matt Hagan was racing on the behalf of the Infinite Hero Foundation and Tony Angelo was racing for AfterTheHate.org. You can click on either of the charity group names to visit their website for more information on their causes.

Congratulations to Matt Hagan and Tony Angelo for their racing success and for helping contribute $5k to their respective charities and, of course, thanks to Dodge for making this event happen - providing the cars and the $10,000 cash prize.