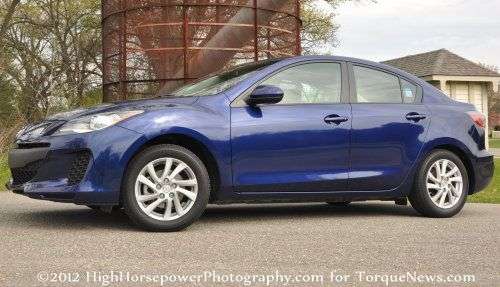 The compact sedan class is jam packed full of affordable models boasting about how they offer a blend of fuel economy and spirited driving but few are as efficient as the 2012 Mazda 3i Grand Touring featuring Mazda’s Skyactiv engine technology – offering 40 miles per gallon on the open road.
Advertisement

The Design
On the outside, the 2012 Mazda 3i Grand Touring offers the distinct modern Mazda styling but unlike Hyundai engineers who take an ultra aggressive approach at their exterior design, the Mazda 3 offers a sporty look with a slightly subdued design. The sharp, angular headlights offer tons of light with a projection design that sport a blue trim ring for a little extra style up front. The massive grille opening and the outer ports in the lower fascia are all flat black and unlike the Mazda 3s Grand Touring – the 3i doesn’t get fog lights. There is a set of fog lights available as an upgrade for $350 for the 3i that offer a different design than the standard fog lights on the 3s Touring and Grand Touring models. Fog lights are really the only thing that I could ask for in terms of the exterior of the Mazda 3i Grand Touring – not because the headlights aren’t adequate – but because I prefer the look of the models equipped with fog lights and I like having that extra lighting.

Other than the grille and outer front fascia openings, there is very little on the 2012 Mazda 3i Grand Touring that isn’t body colored. The side mirror caps and door handles are finished in the same Indigo Lights MC blue paint code as the rest of the car with some sporty 16” standard aluminum wheels tucked neatly into the wheel openings. Out back, the Mazda 3i Grand Touring wears taillights that feature a similar angular style that we see in the headlights with a clear lens design covering the individual colored portions on the outside and the reverse indicators on the inside. The powerful 2.0L Skyactiv engine announces itself through a very minimal single exhaust tip tucked under the rear fascia.

Inside, the 2012 Mazda 3i Grand Touring really shines with the help of the Dune leather package that is standard with the Indigo Lights MC exterior paint. This adds the light brown leather on the front and rear seating surfaces as well as on the padded door panels. When combined with the black that dominates the rest of the interior of the Mazda 3, the leather provides for a very impressive, luxurious look and feel. Like most other vehicles on the market, the Mazda 3i Grand Touring comes with a factory navigation program but unlike most companies that put a huge screen in the center stack with the radio, the Mazda 3i uses a smaller screen set in the upper dash area. This screen includes access to vehicle information and is set alongside a basic readout screen that lists stereo information. The face of the center stack houses all of the buttons and knobs for the stereo and navigation system but if you don’t want to reach for the center stack while driving – the steering wheel also packs a ton of buttons to control the phone, the navigation, the stereo system, the vehicle information display and the cruise control. Below the radio and nav controls in the dash are the simplistic HVAC controls with three large knobs for the basic temperature control joined by buttons for the defrosting system. Below that, just above the shifter is a set of knobs to control the heated seats – which work very nicely on a chilly morning with more control than other heating systems.

The Mazda 3i Grand Touring has quite a bit of headroom and legroom for the driver and front passenger, even if they are both very tall. Two taller passengers might find the inner elbow room a little tight but that is one of the biggest criticisms that I have with the interior. The back seat includes a pull-down center armrest with built in cup holders with just as much headroom as the front seats. With the front seats adjusted for two 6’ tall people to sit comfortably, the back seating area is a little tight in terms of legroom for an adult but there is plenty of room for even an older child.

For a car carrying a price under $25k, the interior of the 2012 Mazda 3i Grand Touring sedan is very impressive with a classy look and all of the major goodies that a higher trimline compact sedan buyer has come to expect. The interior is roomy and comfortable while the front seats provide some side to side grip for the driver and passenger during stints or spirited driving.

The Drive
The 2012 Mazda 3i Grand Touring is powered by Mazda’s 2.0L engine featuring Skyactiv technology, which sends 155 horsepower and 148lb-ft of torque. These figures make the Mazda 3i Grand Touring one of the more powerful cars in the class, trailing only the new Dodge Dart and the Ford Focus, and while I wish that the 6-speed manual transmission was available in the Grand Touring models – this fuel friendly engine provides plenty of fun to drive factor. The standard 6-speed automatic transmission features a manual shift mode that offers some control to the shifts but I found that the 3i made the best use of the Skyactiv engine when left to shift on its own. That being said, I bet that the manual transmission with that amount of power in this compact sedan would make for some real gear-banging fun and a little better acceleration but the automatic transmission still makes for a smooth ride around town with positive, stiff shifts under hard throttle.

Throttle response with the Skyactiv engine is quick, allowing the Mazda 3i Grand Touring to scoot away from a stoplight in a hurry with the automatic transmission sliding smoothly through the gears and while you won’t beat many muscle cars in the Mazda 3i; it packs impressive enough acceleration to allow the heavy footed driver to get his or her jollies – or to quickly merge into high speed highway traffic. Once up to speed, the engine is nice and quiet with the RPMs kept low by the 6-speed transmission but when you put the hammer down, the transmission quickly shifts and the Mazda 3i will climb up to the century mark in impression fashion for such an efficient compact sedan.

The Mazda 3i Grand Touring has a nice low, sporty stance that caters to smooth handling on long sweeping turns and in shorter, tight turns. The steering response is very quick, giving the driver a great feel for the road with the majority of the “road noise” filtered out before it gets to the steering wheel. This sporty suspension package adds to the fun to drive factor but also allows for a comfortable ride when cruising on the highway.

I found that when cruising on the Detroit area highways (which are fairly flat) at speeds in the range of 70-80 miles per hour, the 3i Grand Touring was able to stay slightly above that prescribed 40mpg mark. Fuel economy around town varied based on driving conditions but during my time driving the 2012 Mazda 3i Grand Touring, I averaged around 34.6 miles per gallon. This is slightly higher than the 33mpg average quoted by the EPA even though I wasn’t shy to use every one of the 155hp offered by the Skyactiv engine. Based on my experiences, I suspect that a driver who has less of a need for speed could average some very impressive fuel economy. In short, the 2.0L Skyactiv drivetrain with the 6-speed automatic transmission provides solid performance compared to the class while also hitting a very realistic 40 mile per gallon EPA estimate on the highway. While I would love to row my own gears in this sporty little sedan, the super efficient drivetrain of the Mazda 3i Grand Touring makes the car enjoyable to drive and the suspension system combines a smooth ride with sporty handling characteristics. The segment is packed full of similarly sized sedans chock full of high end goodies but the Mazda 3i Grand Touring does it with class – and without sacrificing performance or fuel economy.

Our 2012 Mazda 3i Grand Touring sedan was priced at $24,970 which adds $1,400 for the Tech Package (blind spot monitoring, Sirius radio, rain sensing wipers, pivoting bi-xenon headlights, etc), $795 destination fee, $275 for the auto dimming mirror and $200 for the interior lighting package to the standard price of $22,300 for the Mazda 3i Grand Touring.

danwat1234 wrote on May 25, 2012 - 1:38am Permalink
If anyone wants brighter headlights, get a 55w HID kit for the high beam and low beam lamps, and 35w for the fog lights. They are a lot more efficient than Halogens as well, meaning more than twice the lumens per watt versus Halogne.