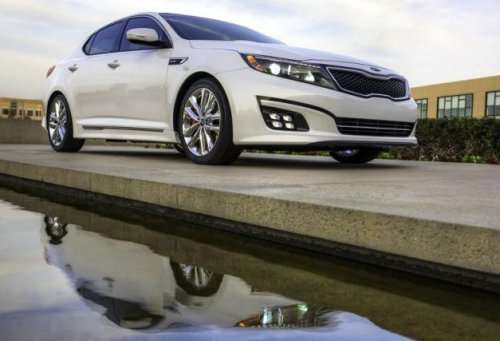 The Kia Optima is a big part of the Korean brand’s success here in the US and at the 2013 New York International Auto Show, the 2014 Optima debut brings about a more high tech look for the sporty midsized sedan that should help it keep up with the Jones’ in the jam-packed segment.
Advertisement

The 2014 Kia Optima refresh is fairly subtle and in passing one quickly on the road, many people may not even notice any difference from the current (2013) Optima sedan. The overall shape remains the same (which is a very good thing) but a slightly revised front fascia, new headlights, new fog lights in certain models and new taillights on the outside while the inside benefits from a higher quality layout featuring an LCD driver information display along with an optional 8 inch infotainment screen in the center stack.

"With the latest version of the Optima, Kia continues to advance value to new levels of sophistication, offering mid-size sedan consumers new premium amenities and convenience upgrades, as well as a refinement of the world-class design that so completely transformed our brand," said Michael Sprague, executive vice president, marketing & communications, KMA. "The Optima is the cornerstone of Kia's design evolution and epitomizes the brand's goal of building highly-captivating, value-positioned vehicles."

The changes made to the 2014 Kia Optima begin up front where the fascia retains the exact same basic shape but low grille opening has been altered quite a bit. Where the 2013 Optima had a large central low grille with black mesh filler that extended out to black trim that wraps around the fog lights, the 2014 model brings some body color into this area to break up all of the black. The grille opening is still finished in black but bars fill this space rather than the mesh with a chrome bar running through the middle of the opening while the black fog light trim is predominantly body colored with a gloss black strip running above the fog light housing and a far more subtle black trim piece around those lights. The fog lights are s bit smaller for the 2014 Optima SX then with the previous models while the premium Optima SX-Limited wears a unique set of four LED fog lights arranged in a tight cluster (as shown above on the right). While the headlights and the upper grille have not changed in their shape, the aggressively angled headlights now have LED driving light bars running along the top to give this sedan a higher end look without departing from the sporty nature of the current Optima.

Out back, there has been a ton of sculpting changes through the taillights, the trunk lid and the rear fascia of the 2014 Kia Optima. The taillights are larger, extending down into the face of the truck lid while full LED back lighting presents a much sportier, high end look. The trunk lid itself has been altered a bit with a face that extends back further where the 2013 model year Optima trunk lid was rounded into the back end. Finally, the lower rear fascia has reflectors that are mounted higher on the body with the old body line that ran along the bottom being removed completely. Regardless of the LED taillights, the basic design of the 2014 Optima goes a long way in making this new midsized sedan look even sportier.

Inside, redesigned seats promise more comfort for those riding in or driving the 2014 Kia Optima along with a ton of high tech additions including a standard 4.3 inch thin film transistor (TFT) driver information display, an optional 8 inch infotainment display and a new Blind Spot Detection (BSD) system.

The 2014 Kia Optima is expected to hit US showrooms in the third quarter of 2013 with pricing to be announced closer to the debut of the new midsized sedan. Click any of the thumbnails on this page for a look at the 2014 Optima in both SX and SX-Limited trimlines.