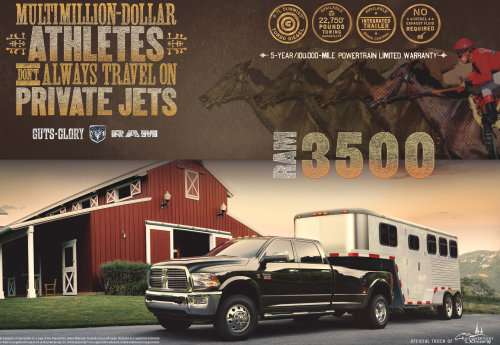 The Kentucky Derby is one of the most watched and richest sporting events in the United States and has been the case in past years – Chrysler’s Ram Truck brand is one of the title sponsors of the 138th running of the roses with post time scheduled for 6:24pm on Saturday, May 5th.
Advertisement

In addition to being named the official vehicle of the Kentucky Derby and the official truck of Churchill Downs, attendees at this weekend’s lineup of high profile thoroughbred horse races in Kentucky will be introduced to plenty of Ram branded vehicle displays, signage around the grounds sporting the Ram name, Ram branded uniforms on track officials and those trucks used on the grounds of Churchill Downs will all be new Ram pickups. Also, for those of us who are forced to watch the 138th running of the Kentucky Derby on television – there will be plenty of Ram Truck brand television commercials including the 60 second “Giants” and “Tommy in the Ram” advertisements. Additionally, NBC Sports will do a 30 second Ram promotional segment highlighting the new Ram 1500 and the high end Ram 3500 Laramie Longhorn – which sports an equestrian theme inside and out.

In past years, the Ram Truck brand logos also appeared on the thighs of the jockeys’ riding britches and while the announcement of the sponsorship for the 2012 Kentucky Derby doesn’t mention the Ram branded pants – Ram will sponsor the “Horsemen’s Lounge” for jockeys, owners and other officials who are part of the big day’s races. The Horsemen’s Lounge offers these folks a place to kick back and relax with internet access, refreshments and even a barista…you know…for the jockey who wants a nice hot cup of coffee after winning the 138th Kentucky Derby. Finally, a representative of Chrysler’s Ram Truck awarded the trophy for the Grade 2 American Turf Classic today leading up to the Kentucky Oaks – with Silver Max ridden by jockey Rafael Bejarano winning the race that is brought to us by the Ram Truck brand.

The Ram will garner far more attention when the crowd pours into Churchill Downs tomorrow for the 138th running of the Kentucky Derby as the equestrian world once again hopes to see a super-horse step out of the crowd and show that they have Triple Crown potential amidst a field of tough competitors by winning the Run for the Roses. At the time that this article goes live here on TorqueNews.com, the current favorite is Union Rags ridden by Julien Leparoux at 5 to 1. Early favorite Bodemeister (ridden by Mike Smith), Taker Charge Indy (ridden by Calvin Borel) and Gemologist (ridden by Javier Castellano) all sit just behind Union Rags at 8 to 1 while Dullahan (jockey Kent Desormeaux) and Hansen (jockey Ramon Dominguez) round out the current top five favorites at 9 to 1. While Union Rags has been a monster this season, this casual horse racing fan likes Take Charge Indy with three-time Derby winning jockey Calvin Borel at the helm to win the 138th Kentucky Derby. The more experienced horse racing fans lean towards Union Rags – a horse who some believe could have that special something to be the first horse to have a real shot at horse racing’s coveted Triple Crown since Affirmed did it in 1978.

The total starting field for the 2012 Kentucky Derby sponsored by the Ram Truck brand is found below with the current odds as of 10:11pm EST with over $665,000 bet on the big race thus far.

Again, the 2012 Kentucky Derby featuring the Ram Truck brand as the official vehicle sponsor is set to start at 6:24 eastern standard time on Saturday May 5th but horse racing fans will likely be glued to the TV all day for the prep races – all of which will surely promote Chrysler’s popular Ram brand.