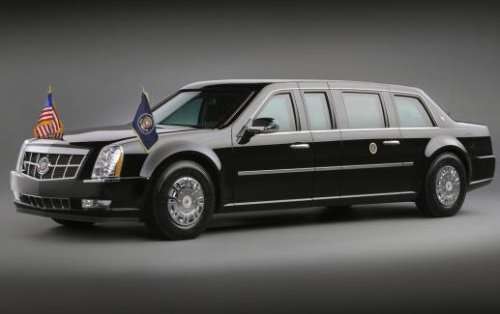 President Barack Obama is in Israel today but his first trip there as President got off to a rocky start this morning when his Cadillac limousine failed to start after the wrong type of fuel was used to fill the tank.
Advertisement

President Obama’s Cadillac limo is affectionately referred to as The Beast and in being unlike any other vehicle in the General Motors luxury brand lineup, it is still powered massive 6.6L Duramax diesel engine. With President Obama’s first trip to Israel as the US President was set to begin today, The Beast was sent over ahead of time to be ready and waiting for the President’s arrival. Unfortunately, open his arrival President Obama was left stranded when his Cadillac limo failed to start. While many anti-GM folks are going to be quick to blame some mechanical defect under the hood of the gigantic Caddy – the Presidential limo would not start because someone had filled it up with gasoline rather than diesel fuel when being prepared for the President’s arrival.

Details on the problem are limited right now but reports out of Israel have made sure to specify that it was an American who was responsible for fueling up President Obama’s Cadillac limo – not an Israeli individual. That makes it clear that this was a case of simple (yet mind blowing) human error rather than someone attempting to cause a problem during the President’s first trip to Israel. As an interesting note,many of the reports out of Israel have stated that The Beast was mistakenly filled with diesel when it should have been gasoline but those reports are the opposite of what actually happened.

Upon hearing that President Barack Obama stranded at Ben-Gurion Airport, Israeli and American officials coordinated with Jordanian officials to have a backup vehicle shipping from an American storage facility in Jordan. This second vehicle was immediately flown from Jordon to the Israeli airport so that the US President could get on with his trip.

The social media networks have been abuzz this morning with discussions of how this kind of mistake could have happened to what is likely the most secure and cared for vehicle in the world. Specific shipping details for The Beast are unclear but I imagine that it is similar in nature to shipping other cars – and that includes draining the fuel out of the vehicle. Once the vehicle arrives at its destination, it would be fueled up for use and that must have been the point at which an unnamed American foolishly filled The Beast with diesel fuel. For those unsure, a modern gasoline car will not run on diesel fuel (or it will not run for very long) so when they went to get the limo to pick up President Obama, the monstrous Caddy wouldn’t fire up.

There could be one good excuse for the American who filled President Obama’s Cadillac limo with gasoline. Here in the United States, diesel fuel pumps are clearly marked while also often being set apart from the gasoline pumps. Perhaps in Israel, the fuel pumps were not clearly marked and – on top of that – if the diesel pumps were not set out away from the gasoline pumps to make it clear to differentiate between the two.

In any case, President Barack Obama’s limo was quickly sent away for servicing while Obama waited for his backup car to arrive from Jordon. That vehicle arrived without incident and the President continued on with his scheduled stops around Israel.

John Goreham wrote on March 20, 2013 - 3:57pm Permalink
Maybe it was an effort to convert to a more green power source? Kidding aside most of the time a gas engine sees diesel it is badly damaged. Worst case the crank and connecting rods are bent. Similar to an engine that sees water. Interestingly, Airforce 1's crew, which is whatever plane the Pres flies in, tests the fuel before each flight for contamination. Surprising they don't do that with the Beast. How come POTUS doesn't have an electric car by now? Aren't we Americans supposed to be moving away from V8 gas engines that meet our needs to electric cars? Show us the way big-guy.