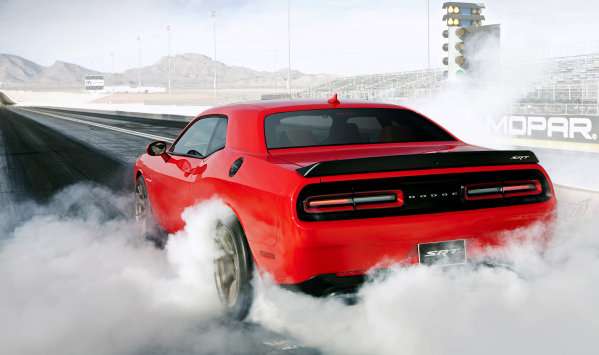 The 2015 Dodge Challenger SRT Hellcat is promised to pack at least 600 horsepower and at least 575lb-ft of torque when it arrives later this year, but the most impressive aspect of this new Mopar muscle car might just be the untapped potential of the supercharged Hellcat Hemi.
Advertisement

When the 2015 Dodge Challenger SRT Hellcat arrives, it will unquestionably be the most powerful V8 car ever offered for road use by the Chrysler Group. Official power numbers haven’t been announced for the new supercharged 6.2L Hemi, but the company has promised that it will deliver no less than 600 horsepower and 575lb-ft of torque. Even if those “at least” numbers turn out to be the official figures, 600hp and 575tq would make the Hellcat Challenger the most powerful Mopar muscle car of all time while ranking second in the history of the American muscle car behind only the current (2014) Ford Shelby GT500 Mustang.

Power Potential Unlike Any Mopar Muscle Before
Being able to make claims like being the second most powerful American muscle car ever will be a big deal for the 2015 Challenger, as will the claim of being the most powerful muscle car on the modern market if Ford goes with a different approach (read: less power) for the 2016 Ford Shelby GT350. However, the most impressive fact is that the SRT Hellcat Hemi will likely have far greater capabilities through the aftermarket – likely allowing the top of the line 2015 Challenger to offer supercar-like power with some work.

While super modifying a performance car like the 2015 Dodge Challenger SRT Hellcat isn’t for everyone, a big part of marketing a performance car is the ability to modify said vehicle. This is one of the big reasons people buy Ford Mustangs – because there is so much potential via the aftermarket. While many people buy a Mustang or Camaro or Challenger based on the factory numbers with no intention of making any modifications to make more power, a great many buyers consider the potential power levels as part of their decision making process. Even though a great many people won’t ever modify their American muscle car to make 1,000 horsepower, some people buy these cars because they COULD reach that level with enough work.

1,000 Horsepower Never Looked to Easy
Through the early generations of the Dodge Challenger SRT lineup that started back in 2008, owners have modified the Hemi engines to make way more power than what is offered in stock form. Both the 6.1L and 6.4L Hemi engines respond well to big power builds and in the proper circumstances, those engines have been modified to make in excess of 1,000 horsepower. With those monster power motors, forced induction is a major part of the big power output and in those cases, the SRT Hemi engines have basically been completely rebuilt from the ground up to handle the added stress of making that power. For instance, with the 2010 Challenger SRT8, going from 425 horsepower to 600 horsepower generally required some sort of forced induction and to handle that forced induction, these engines are almost always modified with stronger internal components. The 2015 Challenger SRT Hellcat Hemi will already have high quality internals that are designed to face the stress of serious forced induction so the efforts made in the past to get the power up to 600 have already been taken care of by the SRT engineers.

With the 2015 Dodge Challenger SRT Hellcat coming with a factory forced induction setup that will yield at least 600 stock horsepower, we will quickly see tuning shops increasing the boost by small amounts while seeing big gains. The new Hellcat has been designed to meet emission requirements around the country and for those who don’t have to worry about that, things like a pulley swap and a fuel system upgrade will likely allow the power output to jump by major amounts. For a relatively low price, Hellcat owners could increase the power up near the 700hp range without any internal changes while those who do beef up the engine of their supercharged 2015 Challenger will almost certainly be pushing well into the 800-900 horsepower levels. Finally, those shops that took the time to build the 6.4L Hemi from 470hp to over 1,000hp will likely hit all time highs with the Hellcat, using the factory forced induction engine to their advantage when building engines for their customers that will rival the power output of the Bugatti Veyron.

Fast in More than Just a Straight Line
In addition to the potential power increases via the aftermarket, the 2015 Dodge Challenger SRT Hellcat should offer the most overall performance potential to owners in areas outside of raw power. The older Challenger SRT8 models were “only” designed to handle 425 and 470 horsepower so when making monster power, the owner would have to worry about things like a suspension, braking and chassis setup that can make use of that power safely. The 2015 Challenger SRT Hellcat, on the other hand, is designed to safely handle 650 horsepower so even in stock form, it should comfortably out-perform older Challenger models with comparable horsepower and less attention paid to the chassis performance. Once the aftermarket tuners get to tinkering with the chassis and suspension systems, the 2015 Challenger SRT Hellcat should also comfortably be the best handling Mopar muscle car of all time – ranking behind just the mighty Viper.