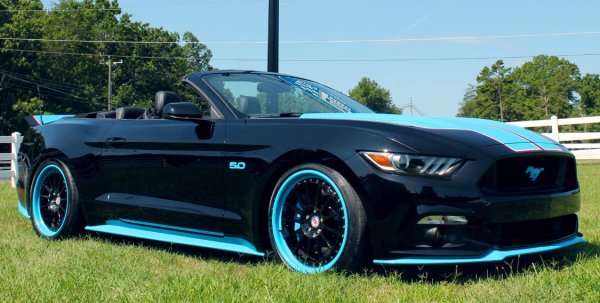 Ford Motor Company announced this morning that a new limited edition version of the Mustang GT – named the King Edition – will offer 727 horsepower in its most powerful form and in announcing this new package, Ford took a direct shot at Dodge’s Hellcat cars with “only” 707 horsepower.
Advertisement

The 2015 Dodge Challenger SRT Hellcat set the standard by which all high powered muscle cars are compared, so it should come as no surprise that with the new 2016 Ford Mustang GT King Edition, Ford Motor Company is marketing this limited edition beast as a Hellcat killer. Petty’s Garage built 143 examples of their customized 2015 Ford Mustang GT which “only” had 627, but with the 2016 Petty Mustangs, the team wanted to be able to take on the biggest dog in the fight – so they increased the output to 727 horsepower in the most powerful form.

“I’ve always liked the look of the Mustang, and the 2016 model gives us a great base car to work with,” said Richard Petty. “These new King edition Mustangs are pretty much the way I’d build my own. They are great fun to drive, and have a signature single exhaust.”

The King Edition
The Mustang GT King Edition starts under the hood, where a Ford Racing supercharger, a MagnaFlow exhaust system and a cold air intake setup adds 235hp for a total output of 670 horsepower, but those who need more power can opt for the upgraded supercharger package with a whopping 727 horsepower. To handle this power, the Petty Garage adds Ford Performance half shafts, adjustable front and rear sway bars and an upgraded rear axle while a set of Continental Extreme Performance summer tires wrapped around unique Petty/HRE 20 inch wheels.

The 2016 Ford Mustang GT King Edition has a starting price of $67,495, but that doesn’t included the upgraded supercharger, so it is unclear how much more it costs for the 727hp package.

The King Premier
The 43 examples of the 2016 Mustang GT King Premium coupes and the 14 King Premium convertibles will have everything mentioned above, but it adds a long list of performance and aesthetic upgrades for an even more impressive performance car. On the outside, the King Premier gets different HRE wheels, a big brake package with 6-piston calipers up front, 4-piston calipers out back and two piece rotors all around, a package specific leather trimmed interior and the stunning custom paint package shown above.

The 2016 Ford Mustang GT King Premier Edition coupe starts at $90,495 and no price has been announced on the King Premier Convertible, but we can expect it to be a couple grand more than the hard top model.

Finally, in addition to the 727hp supercharger upgrade, buyers of the 2016 Mustang GT King Edition can add a racing spec suspension package and improved wheel bushings – although no price has been announced on those items.