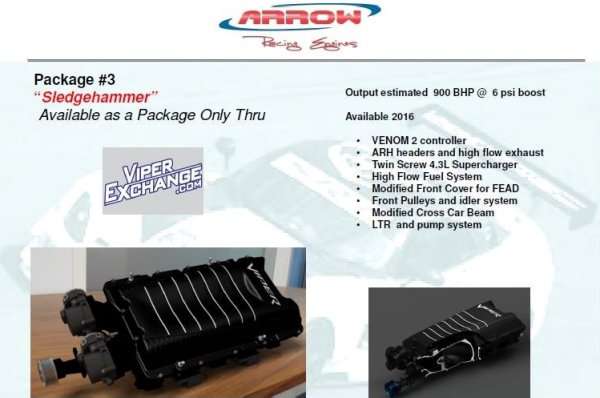 While the modern Dodge Viper is one of the most powerful American production cars of all time, the age of adage that there is always someone faster is why The Viper Exchange has rolled out a collection of high performance packages that lift the output from 640hp up to a whopping 900hp.
Advertisement

There have long been rumors that the Dodge Viper V10 would eventually get a supercharged version to help the supercar better compete with its Hellcat-powered siblings and while there might still be a factory blown Viper on the way – these new performance kits arrive via the aftermarket. While there will surely be other kits on the market over time, this first batch of go-fast packages for the 5th gen Viper (2013+) have been put together by the Viper experts at ViperExchange.com – the same dealership that sponsors Ben Keating’s #33 Viper GT3-R endurance race car.

These kits have been designed with assistance from the folks at SRT and Arrow Racing so while the Viper Exchange performance kits aren’t straight from the factory – they should prove to be the next best thing. Most importantly, these kits lift the output of the current generation Viper to levels that will allow it to beat the best in the world.

There are three performance packages for the Dodge Viper offered by Viper Exchange and the least extreme of those kits is available now, with the rest arriving by 2016.

Package 1 – Tuned ECU
The first package for the modern Dodge Viper is a tuned engine control unit (ECU), that adjusts a collection of parameters to increase performance. The stock Viper ECU is only tuned to make the most of 91 octane, so even when running 93 octane, the Viper V10 will “only” make 640-645hp depending on the model year. The Viper Exchange VENOM 2 ECU unlocks hidden horsepower, tuning the car for 93 octane by adjusting the fuel flow, spark timing and camshaft position. The result of this tuning is an increase of 20-25 horsepower so in the end, the 2013-2014 Viper would deliver 660-665 horsepower while the 2015 Viper would pack 665-670 horsepower – all of which are reached on 93 octane fuel.

In addition to adding some extra power, the ECU package for the 5th gen Viper bumps the rev limiter from 6,400 to 6,600, the final drive ratio can self-learn from 3.07 up to 4.10, the first to fourth skip shift has been eliminated and the catalyst monitor is disabled for those owners to plan to remove the catalytic convertor.

This package costs $1,100 and is on sale now, with the first units expected to arrive as soon as next week.

The result of this package is an estimated output of 733 horsepower, so this cam/head setup adds around 93 horsepower on the 2013-2014 Viper. There is no price or date of availability for this package yet, but I would expect that it would become available sometime this year.

Package 3 – The Sledgehammer Supercharger
The premium performance package from ViperExchange.com for the 5th gen Viper adds a twin screw, 4.3L supercharger that works with a revamped fuel system to deliver a whopping 900 horsepower when running on 6 pounds of boost. This package includes another uniquely tuned VENOM 2 ECU, the ARH headers and high flow exhaust, a modified front engine cover and a modified engine cross-beam cover.

There is no price for this package yet, but ViperExchange.com plans for it to arrive in 2016. This package is fairly simple, so it seems like the Sledgehammer Viper should be street-friendly – yet still pack enough power to beat almost any car in the world.