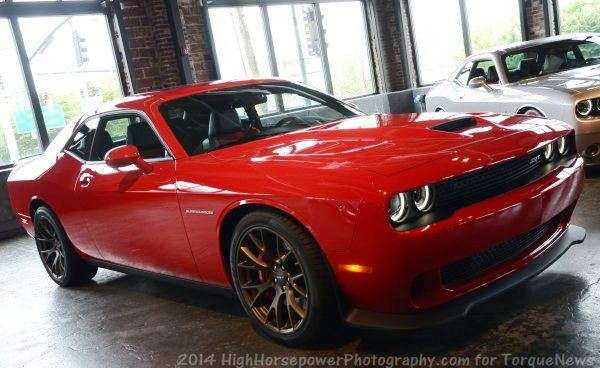 Over 5,000 PreOrders Placed for the 2015 Dodge Challenger SRT Hellcat

After hearing a rumor on the internet that over 5,000 examples of the 2015 Dodge Challenger SRT Hellcat I checked with the folks at the Chrysler Group and they have confirmed that more than 5,000 orders have indeed been received for the 707hp Mopar muscle car.
Advertisement

When the Chrysler Group first introduced the 2015 Dodge Challenger SRT Hellcat this year, followed by announcing a few months later that it would pack an incredible 707 horsepower, there was a rumor going around that the company would only build a limited number of vehicles. Chrysler quickly and publically refuted that, starting very clearly that they would make as many as they could sell. Even then, the big mouths that populate automotive forums and the various social media sites insisted that the company wouldn’t sell all that many Hellcat Challengers.

Well, those people seem to have been very wrong, as the Chrysler Group has received more than 5,000 pre-orders for the 2015 Dodge Challenger SRT Hellcat.

5,000 People Lined Up for a 707hp Challenger?
I should be clear that those 5,000+ pre-orders don’t necessarily mean that there are 5,000+ buyers sitting around, eagerly awaiting the production and arrival of their 2015 Dodge Challenger SRT Hellcat. That figure of 5,000+ pre-orders certainly includes a great many actual pre-sales by a private buyer where a dealership has accepted a down payment and placed a custom order to the factory, but it also includes orders placed by the dealerships around the US for showroom fodder.

Even though a great many people couldn’t and wouldn’t buy a 707hp Challenger (or a 707hp anything), there will most certainly be people who visit their local dealership if they know that they will be able to check out the most powerful muscle car of all time. While at the dealership, some of those people might end up buying a vehicle – whether or not it is a new Challenger. Because of that, many dealerships will want a 2015 Dodge Challenger SRT Hellcat on their showroom floor. However, this isn't a car that will be stockpiled in bunches, so with 2,300 dealerships around the country, there are still likely a couple thousand that are earmarked for a specific buyer.

Chrysler Doesn’t Want These Cars Sitting on Lots
While there will most certainly be some 2015 Dodge Challenger SRT Hellcat models that spend plenty of time sitting in a dealership showroom, the Chrysler Group wants these cars being sold instead of just existing as dealership stock. To help control this, Chrysler is planning a multi-phase allocation process that will essentially force dealerships to move these cars if they want more to sell in coming months. After the first wave of Hellcat Challengers has reached dealerships, the company will monitor the sales of these units and the allocation figures for the second wave of production units will depend on first wave sales. In other words, if a smaller dealership gets a Hellcat and sits on it for months, they might not be able to get their hands on another one in the foreseeable future – and that could impact a customer looking to put down money on a 707hp Challenger.

The biggest problem now is fulfilling these orders, as there are a great many other trimlines of the 2015 Dodge Challenger that are already selling well and the production of the Hellcat model is the most time intensive. Chrysler has to first get the supercharger units from IHI, then they have to build and dyno test each Hellcat Hemi before building the whole car on the assembly line with the rest of the non-Hellcat models.

Because of this, it will take into next year for the company to meet the demand, but it definitely looks as though Chrysler plans to sell as many Hellcat Challengers as they can.