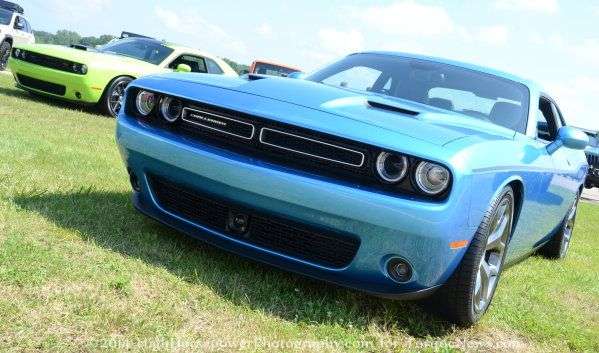 Order Banks Open for the 2015 Dodge Challenger, SRT but Not Hellcat

If you have been eagerly awaiting your chance to order a brand new 2015 Dodge Challenger, your time has come as reports indicate that dealerships can now place orders for the refreshed Mopar muscle car – but prospective SRT Hellcat buyers will have to wait another month or so.
Advertisement

According to the Mopar super gurus at Allpar, the Chrysler Group has officially opened the order bank for the 2015 Dodge Challenger. This means that dealerships can begin ordering cars for showroom fodder and hopeful new owners can place an order for the Challenger of their dreams. Unfortunately, those folks who want to own the most powerful American production car of all time will have to wait a bit longer to place their order for a Hellcat model.

2015 Dodge Challenger SXT, RT, Scat Pack, SRT
Those buyers heading to dealerships this week to place an order for a new 2015 Dodge Challenger will be able to order the car in all configurations except for the new SRT Hellcat package. This means that you can order an SXT with the 3.6L Pentastar V6, the R/T with the 5.7L Hemi V8, the Scat Pack with the 392 cubic inch Hemi V8 or the SRT – which also comes with the 392 cubic inch Hemi. The SXT and R/T models include premium “Plus” trimlines and there is no mention of the Shaker models of the R/T and Scat Pack so it is unclear if those models are available right away. The report states that the 8-speed automatic transmission is standard for all models, but those buyers picking the 5.7L or 6.4L Hemi can also opt for a 6-speed Tremec manual transmission.

Basically, the 2015 Dodge Challenger Scat Pack sounds like it will be very similar to what we know now as the 2014 Challenger SRT Core. The Scat Pack is for people who are most concerned with going fast with the 392 cubic inch Hemi while the SRT models add improved handling performance and a whole lot of higher end goodies that don’t improve performance. A Month to Wait for the Hellcat
While those folks looking to buy a 2015 Dodge Challenger SXT, R/T Scat Pack or SRT392 can place their orders right now, the buyers who want the 707 horsepower will have to wait until August 8th. Production is reported to begin on September 2nd so the first Hellcat Challengers almost surely be hitting the roads before Halloween.

buddy hawes wrote on July 11, 2014 - 4:19pm Permalink
what about wheel option for 2015 r/t Classic with shaker pack? and inside colers?
john garofalo wrote on July 21, 2014 - 11:45am Permalink
I was at my dealer on sat and they had no info on hellcat, they did call me on monday and told me there ready to order the hellcat.only 2 per dealer no color choice and 6000 over sticker which im not ok with.I have too sit down with gm at dealer.hate when they do this.
Cory W wrote on July 24, 2014 - 2:21pm Permalink
I got a call yesterday for the scat pack model. We will see tomorrow if there is anything ridiculous like that . Where abouts are you located? I'm in Ontario.
John Garofalo wrote on July 25, 2014 - 9:49am Permalink
Im in new jersey, I was at dealer yesterday, still saying no color choice and the 6-8 thousand over sticker...im still working on trade in number on my 2010 tored srt8 with 18000 miles on it.
Cory W wrote on July 25, 2014 - 6:23pm Permalink
At the dealer now. The scat pack model is 47,000 here in Canada. Could be 4-6 months before it's built. The shaker model isn't available yet. After taxes and insurance on the loan 60,000.
Alan wrote on July 25, 2014 - 9:30am Permalink
I'm being told that dodge regional sales reps have been told to tell dealers they are not to allowed to charge over sticker for the hellcat as they did when the first SRT's came out in 2008. They want this car to be affordable to those who want it without being taken by the dealers. I've spoken to a local dealer and already been offered a great deal by them and not over sticker price.
Cory W wrote on July 25, 2014 - 1:08pm Permalink
I will be going in 2 hours to the dealer. The colour choices I have so far are pretty much the same as last year's. Except a couple new ones. The brochure says 11 colors he gave me 7 or 8. No info on choice of rims or interior color yet (maybe when I get there). I won't get it yet if it's going to be a guessing game there.
Franklin E Leach CPA wrote on August 7, 2014 - 1:19pm Permalink
Does anyone know the latest with regard to Hellcats being allocated to the Dealers?
Cory W wrote on August 8, 2014 - 3:33pm Permalink
From what I have seen they should be there for October. I am pretty sure production will start sometime this month, if it hasn't already.
HJ wrote on August 10, 2014 - 1:47pm Permalink
I place my order for challenger rt 5.7 1st of july but the dealership have no idea how long it takes to build it anyone knows how long will it take to recieve my car
Danny McWilliams wrote on August 22, 2014 - 10:13pm Permalink
i have a 2009 dodge RT challenger, low mileage, also had a 2008 dodge charge sxt. i will never buy a new car in Canada again, over priced, and way toooooo much tax.GST ALREADY CALLED USA, WILL SAVE OVER 10,000 DOLLARS MAYBE MORE. WE ARE GETTING SO FUCKED HERE IN CANDADA BY THE CAR DEALERS.