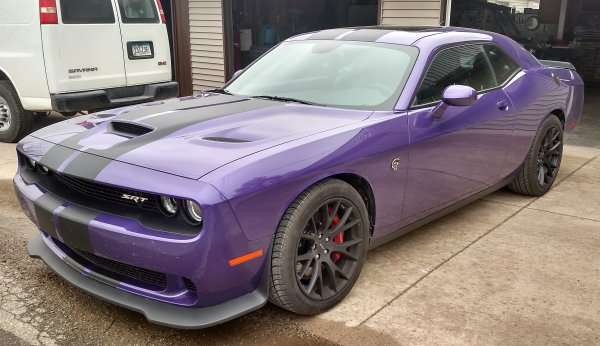 November Hellcat of the Month: Justin Wehmeyer's Challenger is a Family Affair

The November Hellcat of the Month, as chosen by the members of the Hellcat Group Facebook page, is the Plum Crazy Dodge Challenger shown here, which is owned by the father and son team of Justin and Tim Wehmeyer – and which has an interesting story that begins with a classic Chevrolet muscle car.
Advertisement

If you are not familiar with the TorqueNews Hellcat of the Month program, it is run in cooperation with the Hellcat Group Facebook page. Each month, the members of the group nominate five Hellcat-powered Challengers and Chargers, followed by a popular vote to pick the monthly winner. For the November 2016, the Hellcat of the Month winner is the Plum Crazy 2016 Dodge Challenger SRT Hellcat shown above and like all of the privately owned vehicles that we feature here on TorqueNews, this Hellcat has an interesting story and it begins with a Chevrolet Chevelle.

Tim Wehmeyer’s Chevrolet Chevelle
While the Plum Crazy 2016 Hellcat Challenger is represented online by Justin Wehmeyer, the car is co-owned by both Justin and his dad, Tim Wehmeyer. Tim and Justin work together at the auto glass company that Tim opened back in the 2001, over the past few years, Tim had restored a 1971 Chevrolet Chevelle from the ground up. It was powered by a 502 Chevy big block crate engine mated to a 4-speed manual transmission, which Justin points out made it one “badass machine”.

Tim enjoyed his big block Chevy, but when he learned that Justin’s wife, Karin, was pregnant with twins (his first grandchildren), he saw an opportunity to focus all of his energy on being a grandpa. That meant selling the Chevelle and putting the money aside for a pair of junior dragsters when the kids turn five, but when Karin gave birth to a pair of healthy baby boys in February 2015, the Wehmeyer’s were without a muscle car.

Of course, shortly after that, the Hellcat Challenger was introduced and the Wehmeyer men discussed owning one in the future, but when the 2016 models debuted in Plum Crazy – Justin’s interest grew. Tim wanted to wait, but after seeing the Plum Crazy Hellcat Challenger with the Carbon Fiber stripes, they were sold. Justin wanted a new muscle car and Tim was without a muscle car after selling his Chevelle, so the two went in together on this wicked Plum Crazy Mopar muscle car.

The Wehmeyer’s Hellcat Challenger
As mentioned above, Justin and Tim Wehmeyer’s Plum Crazy Challenger is a 2016 model, with the sunroof option and the standard manual transmission. The only modifications include a Barton shifter and a set of QTP exhaust cutouts, but over the course of 10,000 miles, they have a 4th set of tires waiting to go on come spring.

Justin explains that the twins, Cameron and Carson, love the sound of the Hellcat Hemi when the cutouts are open while his favorite aspect of the Hellcat Challenger is dumping the clutch with launch control activated.

In the voting for the November Hellcat of the Month, the Wehmeyer Hellcat garnered nearly half of the votes (among five nominees), beating the second place car by a margin of nearly 2-to-1.

Congrats to Justin and Tim Wehmeyer on winning the TorqueNews/Hellcat Group Hellcat of the Month title for November 2016!

If you own a Hellcat Challenger or Charger and you want to get involved, click here to join the Hellcat Group Facebook page!