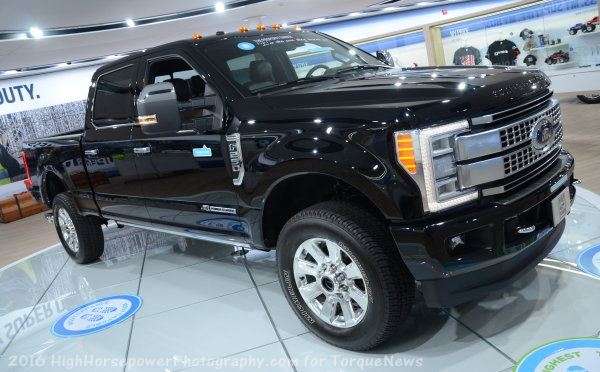 The finalists for the North American Car, Truck and Utility of the Year award have been announced and headlining this year’s awards are the Ford F-Series Super Duty and the Chevrolet Bolt – both of which have been named Motor Trend’s best of the new year – along with the hot-selling Chrysler Pacifica.
Advertisement

Each year, automotive journalists from all over the United States and Canada come together to pick the North American Car and Truck of the Year. For 2017, they have added the Utility of the Year category, allowing the jurors to split actual trucks out from SUVs and minivans.
Today, with the open of the 2016 Los Angeles Auto Show, the North American Car, Truck and Utility of the Year jury has announced their three finalists for each of the categories and an American model has a very good chance of taking each title.

Other than the Chevrolet Corvette Stingray in 2014, the North American Car of the Year award has gone to a compact or midsized car every year since the Hyundai Genesis won back in 2009. Volvo has never won the award, so if the S90 pulls it off, it would be the first for the Chinese-owned Swedish automaker.

It should be noted that the Chevrolet Bolt won the Motor Trend Car of the Year award, which could preface the North American award.

The finalists for 2017 are the new Ford Super Duty, the Honda Ridgeline and the Nissan Titan. Ford last won the award back in 2015 with the F150 and the first generation Ridgeline won this award back in 2006. The Nissan Titan has not won the award in the past, but the Ford Super Duty has just been named the Motor Trend Truck of the Year – which could lead to a North American Truck of the Year.

In any case, the Chrysler Pacifica has a very real change of being the first North American Utility of the Year, provided that it can beat out the SUVs from Jaguar and Mazda.

The winners of all of these awards will be announced in January at the 2017 North American International Auto Show in Detroit.

Steve wrote on December 5, 2016 - 9:31am Permalink
My opinion on all these awards, a component that isn't generally figured into these awards is the long term reliability of the model. If this were figured in Volvo would have a tougher time landing an "of the year" award as would every European manufacturer, except perhaps Mercedes. I say this because recently while looking for antique furniture on craigs list I saw a 2006 XC90 for 5k that appeared to be in very good condition and had a few clicks over 100,000 on the odo., Given I am a bargain shopper I looked into it, as the vehicle appeared to be in very well taken care of condition. Just a little research into the 2006 XC90 and I decided against the purchase as known issues were significant and given the number of reports, high repair costs were inevitable. By contrast a Ford Explorer same year sells for more, as a does a Honda Pilot, etc. this because a well kept Explorer or Pilot of that year can be expected to be a reliable car well past 100,000. I understand car magazines need advertising to stay afloat, however I do believe the expected MSRP drop after 10 years ought to be a component of a new car's evaluation. Or perhaps check a manufacturer's record on improving models to remove known issues with models.