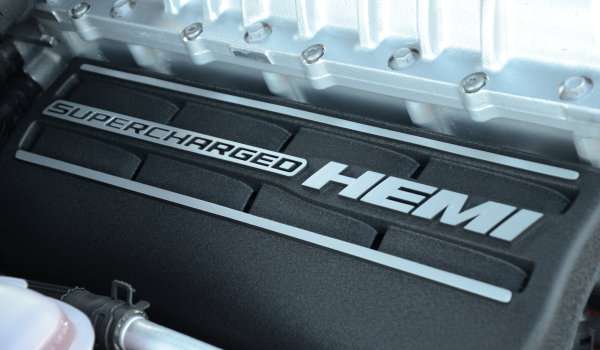 After a bunch of outlets misread or simply disregarded the information on the upcoming Dodge Challenger all-wheel drive and American Drag Racing models, it was incorrectly reported that the Challenger street legal drag racing package would have all-wheel drive, but that is incorrect – as has been clarified by the folks at Automotive News.
Advertisement

Yesterday, we brought you the news that there was an all-wheel drive Dodge Challenger coming after the crew at Automotive News rolled out a handful of future plans for the Dodge brand. When AN reported the coming of the all-wheel drive V6 Challenger, they also mentioned a new widebody package which will be utilized on a future Hellcat package known as the ADR or American Drag Racer. From that report, some outlets confused the information and reported that there is an all-wheel drive Hellcat Challenger ADR on the way, but that is not the case – and Automotive News clarified the initial report. However, there are still plenty of erroneous reports floating around the internet insisting that there is a Hellcat-powered, all-wheel drive, street legal drag racing package on the way.

In speaking with several insiders from FCA, it seems that the American Drag Racer will not be all-wheel drive, confirmed what Automotive News clarified after their initial report.

What is the American Drag Racer?
The Dodge brand has offered the Neon and the Viper in American Club Racer (ACR) trimlines, and each of these ACR models was built to dominate a road course. The Viper ACR has proven to be the best street legal road course car on a handful of tracks and as production, street legal cars go, the American Drag Racer will be just as dominant – but they will be dominating different tracks.

Word from my insiders suggests that the Dodge Challenger ADR will have wider rear wheels and wider, stickier rear tires to get better traction. To help get the power to those sticky tires more safely, the ADR will likely have a stronger driveshaft (one of the first things changed by most Hellcat owners who are going drag racing) and, like many of the regular Hellcat racers, the American Drag Racer will have a steeper rear gear ratio – presumably the popular 3.09 gear set. Oh, and to make room for those wider rear wheels and tires, the Challenger ADR will have a widebody package, with wheel flares keeping the huge rear tires safely within the bodylines. My insiders have also hinted towards a slight increase in power, with final numbers being in the range of 750 horsepower and a new drive mode above Track, which will be designed specifically to yield the best quarter mile times.

Finally, while my insiders haven’t said anything about weight reduction, I wouldn’t be surprised if the Challenger ADR skipped some of the options of the current Hellcat Challenger, such as the premium sound system or the air conditioned seats. I expect that the infotainment system will stay on board, but I also expect some luxury goodies to be left at the factory in order to ease down the curb weight – even if just by a small amount.

In short, if the insider information proves to be accurate, the Dodge Challenger ADR will have a little more power, bigger rear tires, steeper rear gears, a drag strip drive mode and a stronger driveshaft – all of which should make the American Drag Racer a mid-10 second car without any additional work.

Best of all, since the modifications to transform the Hellcat Challenger to the American Drag Racer don’t include a great many high priced components outside of the tires, wheels and driveshaft, the package shouldn’t cost a whole lot more than the “normal” Hellcat Challenger.

Unfortunately, with the Dodge Challenger ADR rumored to arrive sometime in 2017, it could be months before we get any official information, but as more insider information becomes available – you’ll find it here on TorqueNews.com.

A special thanks to those who reached out with this information after all of the junk reports hit the internet. You know who you are!

Elon Musk Says Tesla To Offer Car Insurance in Texas Next Month, But These Challenges Exist
Tesla Co-Found Plans To Build a Battery Factory and Shift The Industry
END_OF_DOCUMENT_TOKEN_TO_BE_REPLACED