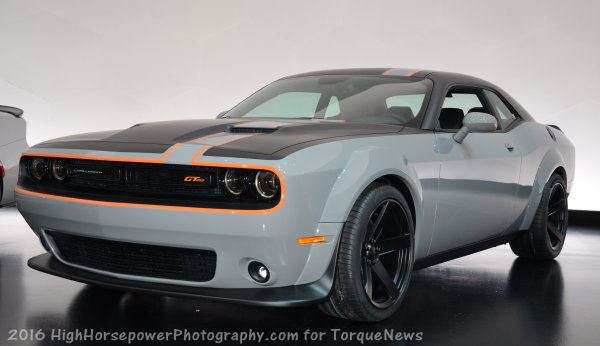 FCA featured an all-wheel drive Dodge Challenger Concept called the GT AWD last year at the SEMA Show and according to the crew at Automotive News, that all-wheel drive muscle car will become a production reality starting later this year – although it is unclear which engine will be tucked under the hood.
Advertisement

The Dodge Challenger, Ford Mustang and Chevrolet Camaro have all changed a great deal over the past decade, but they have all remained rear wheel drive performance cars since their individual inceptions in the 1960s and 1970s. According to a piece by Automotive News, that will change later this fall when Dodge rolls out their new Challenger GT AWD – the first ever production muscle car with all-wheel drive.

This information comes as a part of a longer piece which quickly touches on each Dodge vehicle so the details are very limited, but based on the GT AWD Concept from SEMA and from what I have heard from my insiders, we can put together some pieces to guess what we might see when the production all-wheel drive Challenger hits dealership showrooms this fall.

The Dodge Challenger GT AWD
When the Dodge Challenger GT AWD was introduced last year at the 2015 SEMA Show in Las Vegas, it was based on the Challenger R/T with the 5.7L Hemi under the hood. Having used some all-wheel drive bits from the Dodge Durango which also features the 5.7L Hemi for the concept car, we know that the components will comfortably handle the power output so it seems very possible that the production version will have the 5.7L Hemi. That engine delivers 375 horsepower and 410lb-ft of torque with the 6-speed manual transmission, but the concept was fitted with the 8-speed automatic and since the Durango is only available with an automatic, I would expect that the AWD Challenger will also be an auto-only affair. That will cause a bit of a drop in power, but that doesn’t matter, as this package is going to be geared towards those folks who want to be able to drive their muscle cars year-round, including through heavy snow.

While the Challenger GT AWD Concept had the 5.7L Hemi, information from insiders who wish to remain nameless suggest that it will not be a Hemi car, instead opting for the Pentastar V6. The Dodge Charger in its V6 form is currently offered with all-wheel drive and if the company is targeting year-round functionality over AWD high performance, offering the V6 would make sense. It would make the car far less interesting from the perspective of the average muscle car fan, but it would make the Challenger more attractive to those folks who live in areas with heavy snowfall.

Update: Automotive News has clarified that the GT AWD Challenger will be a V6 model, presumably powered by the 3.6L Pentastar V6 for now.

Regardless of which engine is packed under the hood, the production Dodge Challenger GT AWD is expected to have a slightly different body from the rear-drive Challengers, with a widebody design that incorporates wheel flares at all four corners for added clearance over what would likely be wider wheels and tires. We can also expect some unique badging, package specific wheels (the wheels from the concept look a great deal like the 2017 Hellcat wheels) and a price that will likely be around $2,500 more than the comparable RWD version.

In the long run, the Dodge Challenger GT AWD will “only” be an all-wheel drive version of one of the existing models – presumably SXT or R/T – but that will be a big enough change to shake up the muscle car world.

Oh, and no matter what anyone says, I have a hard time believing that it will actually be called the Challenger GT AWD. With the GT package being a mainstay in the Ford Mustang lineup for some 50 years, I doubt that Dodge is going to run with that trimline name on their own muscle car...especially without some argument from Ford.