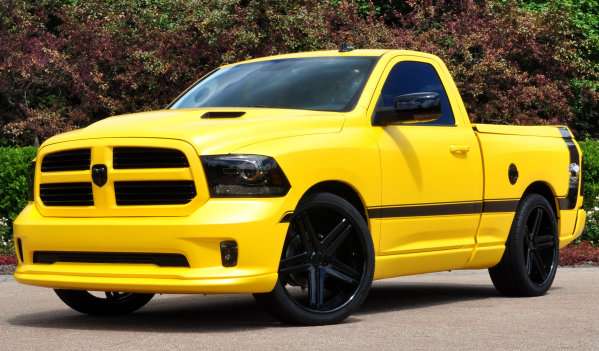 No Hellcat Ram Coming for 2017

There are some reports floating around the internet which suggest that the 2017 Ram 1500 will feature the supercharged 6.2L Hemi V8 and while the idea of a 707hp pickup is an alluring one – these reports of such a vehicle coming for the 2017 model year are completely unfounded nonsense made up by clickbait sites.
Advertisement

Since the first Hellcat-powered Dodge Challenger was formally introduced, the internet has been ripe with rumors of FCA packing the 707hp V8 into other vehicles. Of course, the Dodge Charger was the next in line to get the Hellcat treatment and according to Jeep exec Mike Manley, we will have a Jeep Grand Cherokee with a Hellcat Hemi in the next 12-18 months. However, clickbait websites have continued to publish trash stories about how the 2017 Ram will offer a Hellcat Hemi and some have even gone so far as to make nonsensical videos. As a result of this trash, there are folks posting on the various social media sites about how a Hellcat Ram is on the way.

Sadly, anyone who is holding their breath for a Hellcat Ram will almost certainly die of asphyxiation well before a 707hp truck even hits the local dealership showroom.

Hellcat Ram Rumors
While I wont bother to link to the trashy clickbait sites who insist that there is a Hellcat Ram coming, but a quick rundown of the details behind their fake news.

The Hellcat Ram will reportedly have the same supercharged 6.2L V8 and the same 8-speed automatic transmission that motivate the Challenger and Charger and, remarkably, the rear-wheel drive Hellcat Ram will be able to dash from 0-60 in under 4 seconds with the help of 24 inch wheels. Even though the Ram 1500 is much heavier than the Challenger or Charger and compared to the cars, the Ram would have no weight over the drive wheels, it will still hit 60 almost as quickly as the two Hellcat cars…according to these false reports.

Next, the images which often accompany these false reports show the bright yellow Ram 1500 shown above. That isn’t a Hellcat Ram – it is the 2013 Ram 1500 Rumble Bee Concept. If an outlet is incorrectly labeling a concept vehicle as a future product, their information is likely to be bad as well.

Those outlandish performance numbers and the incorrectly labeled images should be a clue to the reader that whoever wrote the clickbait article didn’t know what he or she was talking about, but sadly, many social media users won’t pick that information out as being problematic. However, when looking at the industry as a whole – and at the success of the Hellcat Dodge cars – there are more aspects of these stories which bring light to the fact that they are false.

Proof of No 2017 Hellcat Ram
In addition to being a strong seller, the Hellcat Hemi has proven to be a fantastic marketing tool for the Dodge brand. The Hellcat name has been one of the most heavily searched automotive topics over the past few years along with creating foot traffic into dealerships. Lots of people stop in at their local Dodge dealership to see a Hellcat car and while many people don’t buy one while they are there – getting customers in the door is a major part of the automotive sales world. FCA has used the Hellcat Hemi to generate a tremendous amount of interest in the Dodge brand, so the Hellcat has proven to be one of the brand’s best marketing tools in years.

They introduced the Hellcat Hemi months in advance with the hopes of striking marketing gold and they succeeded, as people were hunting for Hellcat information online well ahead of the arrival of the first car in a dealership. This early interest is likely one of the reasons why the Jeep boss mentioned the arrival of the Hellcat Jeep by the end of the 2017 calendar year, as it will effectively create more than a year of buzz around the upcoming model.

Now, consider the fact that the 2017 model year vehicles are only a few months away – if that. The Fiat 124 Spider is a 2017 model year vehicle and it is reaching dealerships now, so it shouldn’t be long before all of the FCA brands will roll out all of their 2017 models. After seeing what a marketing score the Hellcat has been for both Jeep and Dodge, can we really expect that the Ram brand would introduce a Hellcat model for 2017 without any fanfare? A 707hp truck would most certainly grab a ton of attention, so if these bunk reports were true, the Hellcat Ram is set to arrive in dealerships in the next few months without any advanced advertising from the automaker. There isn’t even a major auto show before the 2017 models arrive, so if Ram was adding the Hellcat Hemi to the lineup, it would be happening soon – and without any advertising. That just isn’t going to happen.

Mind you, I am not saying that we will never see a Hellcat Ram. Provided that the Jeep Grand Cherokee with the supercharger Hemi sells as well as expected and provided that the Hellcat-powered Dodge cars continue to sell well, a new high performance pickup isn’t out of the question. However, should the company decide to go that route, we can expect that there will be plenty of advanced notice with a big, fancy auto show debut.

In short, if a Hellcat Ram is going to become a reality in the future, we will know about it way before it actually goes on sale – making the 2017 model year an impossible option this far into 2016.