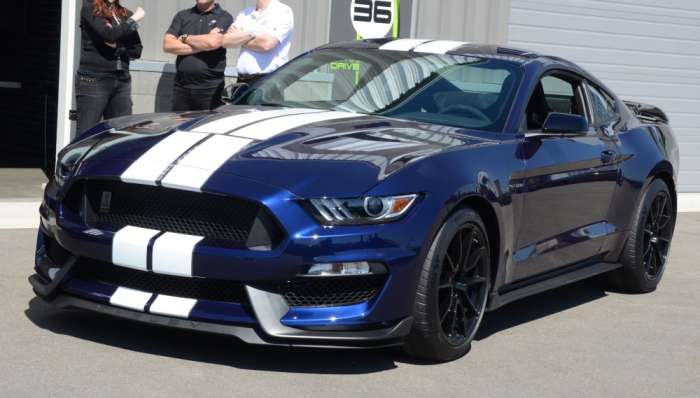 No Facelift Coming for the Ford Mustang Shelby GT350

When Ford introduced the new front end design for the 2018 Mustang, the company opted to not use that new look on the Shelby GT350 models and based on input from Motor Company execs, the high performance pony car will not get the front end featured on the other 2018 and 2019 models.
Advertisement

Late in 2017, Ford Motor Company introduced the 2018 Mustang with no V6 engine and a new front end. The new face of the Mustang is a bit sleeker, with smaller headlights and a smoother overall design, but for the 2018 model year, this new look was only applied to the non-Shelby models. This didn’t come as a huge surprise, as the 2017 GT350 didn’t share a front end design with the 2017 Mustang GT, so many people expected that the Shelby models were simply waiting on their own, unique refresh.

Well, that appears to not be the case, as while speaking with Motor Authority, Ford Performance chief engineer Ed Krenz explained that the Shelby GT350 will not be getting the revised front end from the other Mustang models. Instead, it seems as though the Shelby Mustangs will stick with the pre-2018 headlights and the unique lower front fascia through the end of this generation.

No Focus on Aesthetics
The front end of the 2018-2019 Mustang GT may be more performance-friendly than the front end that was offered in 2015 through 2017, but the Shelby GT350 front end was designed for optimal performance and aerodynamics. The GT350 front end combines the perfect blend of airflow to the engine and air that is sent around the outside of the car to improve high-speed downforce. Switching to a look more like the 2018 Mustang GT front end would require the Shelby GT350 to sport a new front bumper, headlights, fenders, and hood.

Simply switching to the exact same parts from the Mustang GT would have a negative impact on performance, so the engineers would have to design new parts that share the 2018+ design while still achieving the proper air flow. That is not a cheap process, so the company would be spending money to change the look of an already popular performance car, but in doing so, they wouldn’t actually be improving the performance capabilities of the car.

With that in mind, the Shelby GT350 will continue on with the basic design of the 2015-2017 Mustang plus the unique design cues of the package. These comments were fairly open-ended, so it is possible that the Shelby GT350 will wear the same front end until the entire Mustang lineup heads into a new generation – which is likely to be a couple of years out.

Fortunately, the “old” front end on the Shelby GT350 Mustang looks great and offers all of the qualities needed to make the Mustang one of the premium performance cars sold in the US market – even if it doesn’t have the freshest face on the block.